When we see birds fly, we see them as symbols of:

Their loud cries and singing make it feel almost as if they’re talking to us.

But when you see a dead bird, you might have a feeling of remorse.

In fact, when we’re talking about the symbolism of dead birds, we often connect them to the opposites of what living birds represent.

So they could be there to warn us about the air we’re breathing and the toxicity it brings.

If the bird didn’t manage to survive, then you know that it’s dangerous, even to you.

We’ve often seen dead birds in various health hazard situations, such as in Chernobyl, where the adult bird population decreased by as much as 40%.

Historically, dead birds were also a sign of danger.

For some ancient cultures, dead birds represented that they did something wrong and that dead birds were omens of bad luck for them.

For them, it meant that the gods are turning against them for something they did.

Dead birds are not always a negative symbol.

Interestingly, they can also symbolize the process of rebirth.

In Indian mythology and in Christian art, dead birds represent a saved soul – a soul that’s been saved of this world and will be reborn, free, and strong.

Perhaps the symbolism of rebirth is counter-intuitive when it comes to dead birds. But in truth, it can have positive implications, too.

Just like the death tarot card, a dead bird can symbolize the process of a new beginning, a new start.

Native Americans, who value eagles very highly, have special ceremonies where they celebrate the eagle and give it a dignified goodbye.

They believe this ceremony can help the eagle on the road to rebirth and give them a new beginning.

Another animal that symbolizes rebirth is the toad.

Death is a negative symbol that could be present when we see a dead bird. It’s, unfortunately, an inevitable part of our being.

It’s a reminder that all of us are facing death, no matter how free or youthful we are at the moment.

Normally, we connect birds to their freedom of movement and their ability to cover large areas in a particularly short period of time.

So seeing a dead bird can be a bit heartbreaking.

But it’s also there to remind us all that we’re facing the same fate no matter how free or how well we’re feeling at the moment.

Yes, it’s a negative thought but an inevitable one when we see a dead bird.

Birds soar highly, and we often connect them to the soaring that can happen in our wildest dreams.

And when the bird dies, we tend to believe that they symbolize this failed dream.

It might be an indication for you to start again and to get a new dream.

It’s an interesting symbol, too. Many people have dreams that start out very well and promising but ultimately fail. It might indicate to you that you should try and look for a new dream to chase.

Even if the dead bird might mean a negative thing for you at the moment, it can also be a promising sign for you for the future.

It indicates that you might benefit from a fresh start, and it provides you with the chance to go for a new beginning.

Seeing a dead bird is a negative sight, so that’s why we often connect it to heartbreaking events in our life.

Similarly, we may connect the sight of a dead bird to recent failures we’ve gone through.

It might be a loss of a job or break-up with your partner.

6. Death of Someone Close to You

Seeing a dead bird can be a reminder to you about a person you lost that was close to you.

It’s an unpleasant scenario, but unfortunately, that’s what subconsciously springs to mind when we see a dead bird. And this is especially true if the event was recent.

This has been the case for centuries. Native Americans valued birds very highly, and especially eagles.

These animals were deemed to be close friends of Native Americans, so when they died, they were often awarded special ceremonies.

Some people don’t take seeing a dead bird too well. They will automatically connect it to someone who’s passed away recently close to them.

Birds love to live in areas where the air is clean. So when we see a dead bird on the pavement, it’s not a great sight.

They might symbolize to you that the air you breathe is polluted. This is why vultures can also symbolize unhealthiness.

It might not be the case of this at all. But in many cases of dead birds, you’ll find on the pavement, this is true. It’s a typical sight in areas where the quality of air and the quality of life is notoriously poor.

So when you do see a dead bird on the pavement, there’s some reason for concern.

It might happen naturally, but in many cases, it happens because of the poor quality of air.

It’s a common concern in polluted areas like India or China where the quality of air is not the best, but also in many of the world’s major cities.

The Meaning of Dead Birds in Dreams

If you’ve seen a dead bird in your dreams, then it might be telling you something.

Dreaming of a Dead Bird

In general, dreaming of dead birds can have several meanings or implications.

It’s quite a common dream, too.

Many people have reported that this dream happened only weeks or even days after a person they love passed away.

So if this dream has happened to you, it could be a sign of grief that will slowly but surely go away.

The other implication of seeing a dead bird in dreams is that it might represent broken aspirations or negative thoughts in your mind.

Dead birds often represent something going wrong that you’ve been aspiring to do.

If that’s the case, it’s crucial to remain positive, despite seeing a dead bird in your dreams. Even though it is a bad omen, you should look for positive things and looking into the future to go after other dreams in your life.

Seeing a Bird Die in Dreams

Seeing a bird die in dreams usually represents the end of an era in your life.

It represents a period in your life or an era that you’ve been going through for a long time, whether it is positive or negative.

Seeing a bird die symbolizes the death of this period in your life. The bad thing is that an era is coming to a quick end. The great thing about this dream is that this end represents the opportunity for something new.

Just as almost any dream about death, it’s telling you to move on to other things in your life.

Seeing a Flock of Dead Birds in Dreams

Seeing a flock of dead birds in dreams represents your desire to be a part of a group in your life that you hold dear.

However, the bad news is that this group is somehow inaccessible to you or you’re simply unable to enter this group without distorting it.

Seeing a flock of dead birds might also have a very bad omen for your life. It might mean that you’re about to stumble into a time of your life where almost anything will go wrong. But don’t get discouraged by this dream too much.

The symbolism of dead birds is normally connected to the act of dying itself. As such, it represents an end to an era but also a chance for a new start. 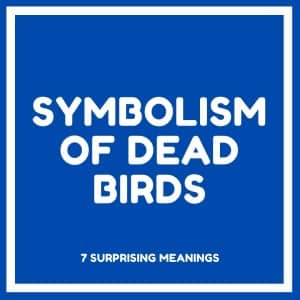 Birds are so free and energetic that it’s almost crushing to see them die.

However, it does happen, and it might carry a lot of symbolic meanings when it happens.

If you want to find out some meanings of LIVING birds, check out some of these articles: