Sparrows are a common creature seen in gardens and woods the world over. Part of the passerine bird family, the symbolism of sparrows is as diverse as the species itself. Similar to the spread of the genus, their meaning has also had a deep resonance across parts of Europe, Asia, and the Americas. 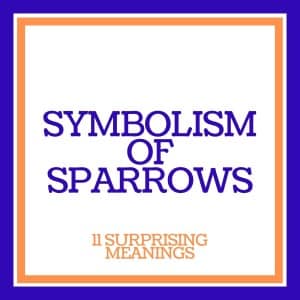 Mostly recognized as a small and unassuming animal, they’ve had an impact on much bigger things. Many contemporary military vehicles and weapons, for example, adopt the “sparrow” moniker. As do warships and even sections of the British army (“The Sparrows” is a nickname for the 79th Light Anti-Aircraft Battery).

There’s also the Russian saying; “to shoot sparrows with a cannon”, meaning to apply drastic measures to small problems.

But that’s only the tip of the iceberg. So read on for more.

The Symbolism of Sparrows in Nature

The best place to start talking about the meaning of sparrows is in the place they’re most often observed; nature. A particular favorite among bird watchers and other nature-lovers, they’re known for building nests on the rooftops of city buildings and scavenging the ground for food.

Found in loose colonies during the breeding season and flocks outside of it, the sparrow is a symbol of social harmony in the animal world. Unlike more solitary birds, especially larger predators, multi-species sparrows tend to stick together. Sometimes they are even observed sharing food between themselves too. The collective behavior is similar to that of Geese.

Of course, there’s one exception to this symbol; the great sparrow of Southern Africa. Preferring to live in solitary pairs or small family groups, you won’t see these mixing with other members of their species. You could call them the “black sheep” of the sparrow family.

Aside from being associated with the relaxing melody of their birdsong (more on this later), sparrows are also known for the peculiar phenomenon of dust bathing. Using their feet to scratch holes in the ground to place themselves inside, they’ll then cover their bodies in dust or sand. Much like a natural mud bath.

This relaxing behavior is something they’ve also been seen to do in water, ice, and snow. It’s also done together with other members of the flock. Perhaps as some sort of performative mating display.

Like many other animals, sparrows make appearances in both Abrahamic faith and other religions.

Although sparrows have quite a poor association in Christianity (often being seen as pests), they are directly mentioned in the Biblical passage of Matthew 10:29.

Used by Jesus when he asked his followers; “are not two sparrows sold for a penny?”, the birds are used as a comparative point to explain the extent of God’s love and care for all creatures on Earth.

The birds were also said to be present in important events leading up to the last days of Christ. Something that has them featuring in several Renaissance artworks depicting such scenes.

4. A Reminder of Human Kindness

The Islamic sunnah, the traditional biographies of Muhammad, features a mention of the sparrow when the prophet himself commanded his followers not to mutilate animals while they are still alive.

Speaking to Ibn Omar, the passage goes; “there is no man who kills even a sparrow or anything smaller, without it deserving it.” This serves as a reminder to Muslims that whoever is kind to God’s creatures is also kind to themselves.

5. Joy of the Messiah’s Return: Tree of Souls

According to Jewish mysticism, the Tree of Souls is a location in the Garden of Eden associated with the coming end of the world. Sparrows serve as a symbol here as they are the only living things said to inhabit the branches of the tree, watching each soul descend. Their chirping in this moment is said to signify the joy of the Messiah’s return to Earth coming closer.

6. Sparrows as Spirit Animals and Totems

In the world of animism the sparrow, despite its size and wingspan, is considered strong and powerful. This has everything to do with how it lives, at home in a group of hundreds. Like the flamingo and other pack animals, the sparrow thrives on safety in numbers.

Inheriting a sparrow as a totem, or seeing it come into your life in different ways, may also symbolize protection. That’s because sparrows look out for one another, under the threat of many predators. So caution and attentiveness are two qualities you might want to be on the lookout for developing.

Another positive association the bird has relating to its labor building nests and gathering food is work ethic. Finding yourself connected for this reason could also signify you’re a person unlikely to delay things or procrastinate.

The Meaning of Sparrows in Mythology and Folklore

The cultures, myth, and folk stories of Ancient Greece, Rome, and Egypt are all places for the sparrow.

Linked to the Ancient Greek goddess of Aphrodite, the god of love, beauty, passion, and pleasure, sparrows stand as one of a group of animals that helped make her an icon of lust and desire throughout the old Mediterranean.

Aphrodite’s connection with the bird also reportedly influenced the writings of Shakespeare and Chaucer too.

Sparrows make rare appearances in the language of the Pharaoh’s but do serve as symbols present on a few of the era’s tombs and throne rooms. Here their representation was negative, however; meaning narrow, bad, or small.

Similar to their representation in the Judaic Tree of Souls, sparrows also carried connotations of death in aspects of European folklore. Oddly, but perhaps related, there existed a superstition in the British region of Kent to kill a sparrow if caught. Not doing so, it was believed, would lead to the death of either the catcher or their parents.

A sparrow also appears as an omen of death in the Brothers Grimm fairytale “The Dog and the Sparrow”. Here the animal ends up driving the owner of the dog to his own death at the hands of his wife.

Contrary to it being a symbol of death, the sparrow is seen in some cultures as one of good luck. In China, for example, it’s associated with springtime and feelings of happiness (much like the meaning of wrens). Perhaps one reason it stands as a decorative element in many traditional Chinese paintings, ornaments, and furniture pieces.

Folklore from Indonesia looks at the sparrow similarly. Especially if it manages to fly into a home and construct a nest.

Symbolism of Sparrows in Technology

Not only does the significance of the sparrow play out in ancient culture but it has an important position in the modern world too. When it comes to the naming of aircraft (Carlson Sparrow), electric vehicles (Corbin Sparrow), and even missiles (Sea Sparrow), it also has its place.

It appears again as the name of an early 2010’s email client for Apple technologies too. Here it was maybe influenced by symbols of a sparrow’s lightness and speed.

Sparrows are a popular sight for many of the world’s population. They appear not just in gardens and rooftops but also as a name for many things we see in our everyday lives. From film titles to music groups, song titles to plays, the symbolism of sparrows is everywhere.