The goose carries some interesting meanings. Even if it might appear to be an inconspicuous animal, it can teach us several lessons that we can take to improve our lives. The symbolism of geese is closely connected to the animal’s long history – it’s been on our planet for more than 12 million years.

Geese rely on teamwork and cooperation quite a lot. When they travel around and change places, they normally travel in groups. That’s especially true for families because the smaller geese would get lost if not guided by their elderly. Because of that, geese are symbols of teamwork, family, and even loyalty. 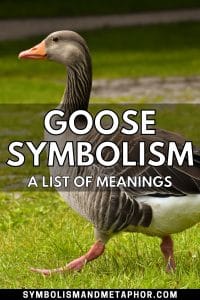 Furthermore, it’s interesting to observe the behavior of geese and how it affects its symbolism. They’re very focused on comradeship and companionship, as they’ll defend and stand by their friends until they die.

The 9 Surprising Meanings of Geese

Some of these meanings are closely tied to the goose’s behaviors, although some are quite surprising, too. Here are the most interesting meanings of geese.

If there’s one single quality that we can take from the geese to inspire us, it’s this one. The geese love to stay in groups and achieve things through collective effort. When they wander around, you’ll very rarely see them move alone. (They’re very similar to Flamingos).

Rather, they prefer to stay in groups. And when they do that, they have a higher chance of survival. They also stay in flocks when they fly. Geese will normally cover immense distances as they fly in the wild. Although these animals are also widely spread in captivity, and this ability to cooperate with other geese is what makes them easy to manage.

Even in captivity, geese like to stick to other geese. They’re highly social animals, and they like to display this by sounding their sociable gaggle. This makes them easy to manage, which is why they’ve been around with humans for more than 5000 years!

For geese, the family is very important. They like to stay with their families for most of their childhood. And after they become adults, they will start thinking about raising their own families, too.

When they feel endangered, they will intimidate the opponent. They’re very protective, so they might attack anyone or anything that feels threatening to them.

The geese are loud animals. When they’re together with other geese, they form a cacophony of sounds and noises, which is what almost everyone who has owned geese in their life will tell you.

When they’re around their friends and family, they love to communicate with each other. They use their distinctive honk to both call their family and even warn them about potential dangers. This honk can be heard throughout the entire year, and they are quite loud even during day or night.

Wild geese can be even louder. This is especially notable when they fly in flocks, as you’ll be able to tell immediately that it’s geese you’re hearing. And when they fight or get aggressive, they’ll also let out loud noises to scare their opponents. (See also Wren and Sparrow symbolism).

Now, this is perhaps a surprising meaning of geese. These animals are incredibly protective when they breed. They’ll defend and attack anyone who seems threatening to them or their offspring. During breeding season in early spring, they’ll be especially aggressive towards anyone threatening their offspring.

As a result, many potential attacks happen, even on human beings. If you’ve ever been attacked by a goose, then you might remember how aggressive the attack was. However, these attacks are rarely harmful or painful. They do bite, although these bites are not that painful.

This instinct for survival is very strong with geese. And it’s why it has become one of the most interesting symbols of geese. 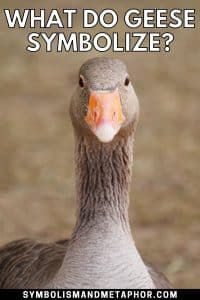 Geese are often preferred by farmers over many other species because they’re highly loyal. They’re also quite hardy and adaptable, so they require little to no maintenance to survive. These qualities make them a favorite for farmers.

Of course, it’s also because of what they have to offer to the farmer. They’ll be used for meat, but also for other goods they have such as feathers.

Another big sign of loyalty for geese is how the goslings follow their mothers until they grow up. They’re highly dependant on them, and will even come back to them once they’re grown up.

Other birds that symbolize loyalty are the swan and vulture.

Wild geese are skilled navigators. They’re able to travel thousands of miles across continents and still find their way effectively. When the weather gets cold, they travel to warmer areas, and they do that by traveling in flocks.

This quality allows them to find a new home quickly and easily. They prefer areas where there is some water, although they’re quite adaptable, so they’ll be able to survive even in a wide variety of scenarios. This adaptability and their ability to navigate their way effectively serve them well when finding new areas to live in.

Even though geese are not the most imposing animals in the world, they’ll always seek to protect themselves and their offspring against any potential aggressors. They’re brave animals, although they don’t always win in every fight.

In the wild, geese are highly territorial, too. They have a very strong instinct for survival, so they’ll challenge other animals and even fellow geese for territory by fighting them. This aggression often results in injuries or even death, which just goes to show their strong sense of survival and a high level of bravery, too.

Now, this meaning is quite similar to the meaning of loyalty, although slightly different. Comradeship shows in the geese’s ability to support other geese through tough times. Often, when a goose gets left behind the flock, it’s either injured or even dying.

However, this goose will rarely be left alone (unlike the reclusive barn owl). Almost always will there be a goose that will stand by the fallen goose in these tough times. This goose will stay with the fallen fellow until it has recovered or died. This quality is highly commendable and something that can inspire us, too.

Geese are very prolific in terms of breeding. The breeding season for geese runs from February to April, which is when the male goose (gander) actively seeks a breeding partner. It depends on several types of geese, although some geese will have higher breeding numbers than others.

Normally, they will produce anywhere between 12 to 40 geese per breeding season. These are relatively high numbers, although they can vary.

In the wild, the geese can be prolific breeders. When given the chance and under the right circumstances, they’ll be quite active in their breeding behavior.

3 Meanings of Geese as Spirit Animals and in Dreams

Geese as spirit animals carry several meanings to you. These meanings follow closely the character of geese and how they behave in the wild, but also in captivity.

All these qualities of geese help you guide you through your everyday life. They’re an underrated spirit animal that provides some very commendable qualities. They’re very family-oriented, meaning that if you follow the goose as your spirit animal, you’ll have to value your family very highly.

When observing the symbolism of geese, we have to take a closer look at the personality of geese. After seeing and analyzing them closely, we think you’ll agree that they do carry some very respectable meanings, and they’re also quite underrated as spirit animals, too. 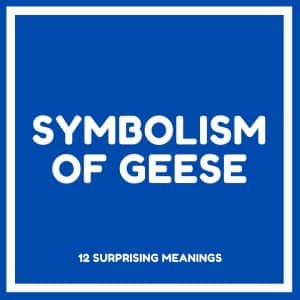 Their family-centric behavior helps you always remember where your roots are. They also guide you to seek to improve your communication skills because geese are very adept communicators – and loud, too. They share this trait with parrots!

See Also: The Symbolism of Herons