The symbolism of heron is largely based on the nature of this animal and its appearance. With their long legs, slim body and pointy beaks, they carry a unique meaning.

To find out the true symbolism of the heron, we have to take a closer look at how and where herons live. They live in areas where land and water merge and create this peaceful and still entity. That’s why herons have become symbols of peace and tranquility, but also stillness.

Another important characteristic of herons is that of patience. They also tend to wait for a long time for their prey before they pounce. They do that by waiting, still and quiet, until the prey exposes itself and becomes attainable.

Besides the interesting symbolic meanings we’ll discuss below, it’s also interesting to see how the symbolism of herons differs in different cultures all over the world. We’ll also discuss the meaning of heron in dreams, so read on.

The 8 Meanings of White and Great Blue Herons

Here’s what the white and great blue heron symbolizes to us.

To understand this symbolism, it’s best to first describe the typical habitat of a heron. They’re distributed on almost every continent on Earth where the conditions are right for them to survive. They’re described as non-swimming waterbirds that you’ll find on the margins of lakes and seas.

Most commonly, they prefer to live in areas where the waters are still. That’s why we often connect them to the symbolism of tranquility. They’re predominantly found in lowland areas where there are swamps, which are known for being very peaceful and tranquil.

That’s where these birds will locate and hunt their prey. They like to feed on smaller fish that they can catch in this peaceful area. These birds are otherwise pretty harmless and peaceful animals, as they don’t have any real enemies. The only fighting they do is when they catch their prey to survive.

Again, we connect this behavior largely to the way heron catch their prey. They’ll wait for minutes or even hours if necessary, standing still in the water until they spot movement in the water. And they’ll try to hunt any smaller animals they can find in the water, such as fish or reptiles, amphibians, or anything smaller than themselves.

Most of the time, they’ll move slowly before waiting for their prey again. With their long legs, they create this image of balance and elegance that just symbolizes stillness. It’s interesting to observe these animals and just appreciate the tranquility and stillness they portray when we look at them.

Herons are patient animals when it comes to catching their prey. They’ll wait for hours and hours before they’re able to catch the animal they’ve chosen as prey. This is the type of patience that is highly appreciated in today’s society, but not very common.

It’s interesting to observe how this symbolism goes against almost anything that we find in today’s world. Most people expect results overnight, which is why they never develop the patience needed to achieve what they’re trying or wanting to achieve.

Another bird that symbolizes patience is the falcon.

One of the main meanings of the heron as a spirit animal is one of self-reliance (similar to the sparrow). Very early in their development, herons are required to be able to take care of themselves. That’s why they develop this self-reliance pretty early on because they are required to.

It’s certainly a quality that we respect about herons. And most of the time, they’re able to survive on their own because they don’t have that many natural predators around them. And if they do get in danger, they possess this ability to get away and simply fly away when they’re in danger.

This is an interesting one. Despite being known as the symbols of tranquility, herons are actually quite easily disturbed. They have this interesting behavior that when they are poked or disturbed, they tend to defecate.

This led them to become called shitepokes, which was even a recognized name for herons all the way through the 19th century. However, today, we call them herons, although this behavior still happens when they are provoked or disturbed.

Today, herons are symbols of elegance due to their long and sleek appearance. However, this was not always the case throughout history. In the centuries past, herons were actually considered to be not that attractive when it comes to appearance.

When people saw a slim person in the 19th century, they instantly connected them to heron because of their slim appearance. But nonetheless, their movement is somewhat elegant and we today connect herons to elegance.

Most herons like to live alone and hunt the prey on their own. This ability for them to catch the prey for themselves allows them to live a relatively free life. They’re only relying on themselves to survive comfortably, which is why we often link them to the symbolism of independence.

It’s a highly valued trait nowadays, and one that we like to associate with. So herons have this trait that’s respectable today, which makes them commendable creatures.

Even if they might not appear so, herons are quite intelligent in their own right – a bit like barn owls. They often use their intelligence to get what they desire. When they’re catching their prey, they have to rely on their own intuition and intelligence to succeed.

They’re also quite capable of finding their bearings. They might fly away for several miles and they’re still capable of locating their original place. They create nests in higher areas near or above water, although not every species of heron does that. And without a great and intelligent plan, they wouldn’t be able to do so.

The Symbolism of Heron in Different Cultures

Let’s take a closer look at what herons represent in various cultures.

Heron, but also almost every other bird, carries a special place in Christianity. Normally, the Christian culture connects birds to peace and prosperity, although herons carry a slightly different meaning for Christians.

Namely, herons are thought to be omens of good luck and fortune. The way of life of herons inspires Christianity, with their ability to survive independently and in peace while also waiting patiently for their prey. Their perseverance is also highly valued in Christianity.

Christians are also aware of the content nature of herons and their satisfied way of life. They’re patient to get what they want, which is in line with the values of Christianity. Perhaps it’s not that surprising to mention that herons are also highly valued because of their peaceful nature.

For Celtic tribes, the heron stands for independence, autonomy, persistence, and longevity. Celts were tribes that were very closely connected to nature itself, so they often sought elements in nature to connect with and carry as symbols.

The heron is just one of the many symbols that Celts loved to associate with. Because of the above-mentioned qualities, the Celts often connected herons to their gods.

One of the most notable ones was Rhiannon, who is the goddess of waters and lakes. In many of the creation stories of Rhiannon, herons are the re-incarnation of Rhiannon. Interestingly, that’s why many Celts preferred to call herons the Lady of the Lake.

Sometimes, herons were even present on the shields of Celtic warriors. They inspired the warriors to stay persistent and fight on, no matter how the fight was going.

Again, Native Americans were closely tied with nature, and herons became powerful symbols. They saw themselves as the friends of nature and as an extension, of herons, too. Perhaps the most highly valued quality of herons for Native Americans was the ability to survive on their own.

The Meaning of Great Blue and White Herons in Dreams

There are several meanings of herons in dreams, even though they are not that common when it comes to being dream symbols. 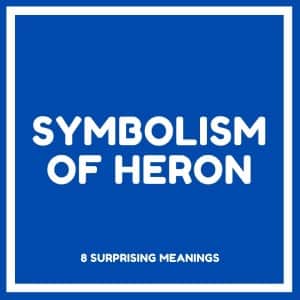 It’s interesting to observe the symbolism of heron in our life and in different cultures around the world. Because of their stillness and peaceful behavior (much like Flamingos), herons represent a respectful figure that even Native Americans and Celts looked towards. It’s also a common figure in Christianity, where it represents peace and prosperity.