Famed for their blood-red feathers (the literal translation from Greek), the symbolism of flamingos relates to more than just the symbolism of their feathers. They are famous for standing on one leg, with the other tucked under the body. They’re known as being a little mysterious precisely because this behavior is a puzzle.

Aside from their influence on the locals in the regions they populate (mainly in the Americas and the Caribbean), their significance is far-reaching. They’ve appeared in Disney films used as croquet mallets (Alice in Wonderland). They’ve even been part of a grand conspiratorial hoax; convincing people blue versions of the species exist (they don’t).

Here we take a look at some of the more popular meanings flamingos have in the areas of history, spirituality, and even garden furniture.

When most people think of flamingos they think of pink long-legged birds. But the morphology of this wading bird also lends itself to many other visual representations.

Due to a diet rich in algae and invertebrates, flamingos get their pink color. The carotenoids in these foodstuffs act as pigments that lend themselves to the tone.

For humans observing this, it’s a stark reminder of the importance of our health and our nutrition. Just like flamingos, although it isn’t so obvious, we are also the sum of what we eat and how we move.

So we better be more conscious!

The average flamingo can stand anywhere from 3.5 to almost 5 feet in height. That’s very tall for a bird. It’s also a reason why we imagine them towering off the ground.

One lesson to be learned here is that grace comes from extension and posture. A long-legged flamingo using its vertical assets can be just as impressive as a human doing the same. It’s all about being proud of the body you’re born with.

It’s also a reminder of beauty being in the eye of the beholder. What might be deemed an ugly aesthetic to some, isn’t the view of all. But just for the record, I think flamingos are beautiful.

Flamingos eat, swim, and live in large numbers. Evolutionary-speaking that helps them survive. Each bird looks out for one another as they also do possible dangers. Here, we can see they’re very similar to Geese but opposite to the reclusive barn owl.

Looking at a crowd of pink this way helps us remember that sometimes we’re better off having one another’s backs.

We mostly view the flamingo as belonging in shallow water, using their legs to keep their body and beaks well above the surface. This design helps them massively with feeding. They’re much better placed to spot larva, insects, mollusks, and crustaceans.

Being on the water (or close to it) seems to be the place the flamingo feels most at home. Just like beach for coastal loving humans. For more on water symbolism see our article on the symbolism of the ocean.

Flamingos play a big role as totems and spirit animals for believers of animism. Their nature, as well as their appearance, cast many different meanings. Let’s look at the more common ones.

Flamingo-people in animism are said to be intellectual sponges that are very in tune with people’s emotions. Maybe this idea has something to do with the sight of a group of flamingos (actually referred to as a ‘flamboyance’). Gathering in their thousands, in locations as diverse as salt flats, lakes, swamps, and lagoons, they’re a very calming sight.

Another quality that animists believe flamingo-people to have, due to their contemplative nature, is balance.

Said to process details and interpret information carefully, adopters of the flamingo as a spirit animal are deep and balanced thinkers. They also never rush to conclusions and remain patient. A lot like the birds themselves, who look still and unmoving when viewed from afar.

Maybe this has something to do with flamingos’ well-known ability to perch on a single leg for hours on end.

Flamingos are usually photographed close to one another. Both in flight (which they do at high altitudes possibly to avoid predation) and on the ground.

Perhaps this is a reason why teamwork is said to be another important quality in the realm of flamingos and spiritualism. People with whom the animal resonates are often very family and friend orientated. Very rarely are they loners or people who enjoy solitude.

Symbolism of Flamingos in History

The image of the flamingo appears in several cultures in different ways. Here we take a look at its meaning in Ancient Egypt, Greece, and India.

One interesting way the bright coloring of flamingos has been used in the past is in their use in Egyptian hieroglyphics. Used as symbols to denote the color red, they appear on the writings of tombs, sarcophagus, ornaments, and many other artifacts of the ancient Egyptian world. In terms of religion, the civilization also considered the animal the physical manifestation of Ra, the Sun God.

Despite their Indian population tripling in recent times, the flamingo has long been present in the eyes and ears of the subcontinent. Known in the Hindu sacred texts of the Ramayana and Mahabharata as the animal form of Lord Indra and the Goddess Gayatri, they are considered a blessing in most parts of India.

Mumbai’s Sewri mudflats are also known as one of the world’s best places to see big populations of the lesser flamingo species in a single spot.

Thanks to flamingo populations in the Mediterranean, the bird is also a prominent symbol in Ancient Greek art. Considered an omen of luxury and rarity, it sometimes appeared on pottery from the era. Some of which have had a strong influence on the flamingo’s appearance in modern art and design.

Flamingos in the Home and Garden

Aside from being the name of a 1977 American comedy about a drag queen running wild ( considered one of “the most outrageous films ever”), the symbol of the pink flamingo has a peculiar place amid home and garden decor.

According to the rules of feng shui, a philosophy centered on arranging pieces in a living space to achieve harmony in the natural world, flamingo-based paintings are said to be great additions. Associated with migration and finding new freedom, a flamingo art piece is thought to bring energy to a home.

Alongside the garden gnome, the plastic flamingo is hugely popular as a garden ornament throughout the US. First designed in 1957 by American artist Don Featherstone, who even called his model ‘Diego’, plastic flamingos have gone on to become an icon of kitsch.

Weirdly the city of Madison in Wisconsin adopted the plastic flamingo as their official bird. Forward Madison FC, Madison’s soccer club, even has the symbol on its crest.

Dreaming about flamingos is said to be a positive experience. On one hand, it evokes romance and balance. While on the other it points to success and love.

Another romantic bird is the cardinal.

Flamingos, unlike many other animals, don’t appear in too many idioms or phrases. One that does exist though, although not regularly heard, is that of “being a flamingo in a flock of pigeons.”

Plainly speaking, it means to embrace your quirks and idiosyncrasies and celebrate your uniqueness. Doing so will also get others around you to do the same. 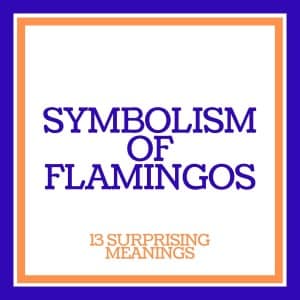 The symbolism of flamingos is very deeply rooted in positive ideals. Not only do they promote individual independence and self-love but they also remind us to lift up and energize those around us. There are very few negatives in the way of their associations.