The falcon is an animal that’s been closely connected to human spirituality for thousands of years. From Native Americans to modern culture, falcons have always been an important symbol of freedom, autonomy, vision, and victory.

These qualities have granted falcons a special pass when it comes to how they’re treated by humans. Many noble families in the middle ages used falcons for hunting because of their extraordinary vision. But falcon symbolism is also present in the insignia of noble families, as well as for some Native American tribes.

The falcon also offers some protection to you as a spirit animal, especially during a transitional period in your life. From the Egyptians to Native Americans to modern culture, we’ll take a look at the different meanings of the falcon as a symbol and as a spirit animal.

The number one thing we think about when we see a falcon is freedom. This bird is free to go wherever it wants, thanks to its adaptable nature and the ability to fly so high. They also have a certain level of autonomy about them, especially when they grow up.

And these animals are forced to grow up quite quickly. They’re required to learn how to survive on their own and how to fend for themselves instead of relying on their elders to help them out. This is a lesson that we could learn as a modern society where being free and autonomous is ideal.

Their ability to fly quickly and in high altitudes allows them to switch areas quickly – much quicker than most other bird species in the world. That’s why these animals are distributed all over the world, except for Antarctica. Some evidence suggests that they can travel at speeds of up to 200mph, making them one of the fastest species in the world!

Other birds that symbolize freedom are the wren, bald eagle and albatross.

This high level of autonomy is typical of all hawks, but falcons especially. Fledgling falcons are required to “grow up” quite early in their lives – sometimes even after only a couple of months. That’s when they need to start fending for themselves and finding their own prey.

One of the major challenges of fledgling falcons is learning how to fly. Many young falcons are initially scared of flying on their own, and some of them fail. This means they’re often left to themselves to learn how to fly – those who succeed will be able to survive comfortably.

Those who fail, will fail miserably, unfortunately. But it’s a way of falcons for developing autonomy and the ability to fend for themselves rather than relying on others excessively.

Falcons very rarely lose. They’re formidable animals with a high level of power, which is why these animals were historically so closely tied to many noble families and upper classes, ever since the times of Egyptians.

Egyptian pharaohs, when they were buried, were often accompanied by a falcon in order to symbolize their winning nature. Even Roman emperors liked falcons as a symbol because it brought a good prognosis with itself for victory in their battles against other tribes.

For the upper classes in Europe but also in Japan, falcons represented a popular figure, too. It was believed to be a symbol of power and victory, which is why it was so commonly present as a symbol of nobility.

Falcons have extraordinary vision. As they fly several miles into the air, they are able to scan miles and miles of territory. They have adapted their vision to this ability to fly high, so they’re able to see details in the distance, which is what human eyes would never be able to spot.

This impressive feat makes them a formidable hunter in the wild. It’s also how they’re able to catch the prey for themselves and how they learn to survive on their own. This symbolism is important for falcons as spirit animals, as they teach you how to see things more clearly in your life (more on that later on).

Falcons will scan the sky for hours and hours until they spot the right opportunity to strike. This patience allows them to be able to catch their prey with ease because they spend hours and hours every day flying around and spotting their territory for potential opportunities.

Their vigilance is admirable. It’s also an important symbolism of falcons as spirit animals because they teach you to be patient when things get tough.

Another bird that symbolizes patience is the heron.

The top-down perspective falcons have on the world makes them a symbol of power. They’re able to control what happens on the ground, and from a perspective of height where they’re able to see the whole picture.

The prey they pick is often powerless to their attacks, which is simply because these attacks are too powerful for the prey. They come charging at the prey at high speeds, so even if the prey tried to avoid it, it would be somewhat powerless to resist.

And this is also a huge reason why many noble families and upper classes throughout centuries liked the falcon as a symbol. Many used them as a symbol for their insignia, while others used falcons at funerals of leaders.

Falcons have a great deal of focus about them. They need it because they have to scan miles and miles of land in order to find what they’re looking for. Normally, it’s only a small part of the land they scan, where they need to find that tiny piece of prey for themselves.

They like open areas though, as they find it easier to find their prey in those sorts of areas. Although it still requires a great deal of concentration, which shows falcons are also highly intelligent creatures. Because of these qualities, they have become symbols of focus and concentration.

The peregrine falcons are a sub-species of falcons commonly found in North America, where it is often referred to as Peregrine or the Duck Hawk. It has its typical blue-grey appearance, and a distinct small beak and black head.

The peregrine is a special type of falcon. It’s the fastest animal species in the world, capable of achieving speeds of up to 210 miles per hour. That’s what makes it a symbol of speed.

But perhaps more notably, peregrine falcon symbolism has a lot to do with how it catches its prey.

It has a special technique which makes catching prey easy for them. They’ll strike their prey at incredibly high speeds, which leads to an unavoidable death for the prey. They’ll strike from miles above the ground and so rapidly that the prey would not be able to get away, even if it is able to spot the falcon.

This technique makes it a powerful symbol of aggression, and it’s often considered as a symbol of martial arts, too.

Falcon as a Spirit Animal

What does the falcon bring to you as a spirit animal? Here are some key meanings of falcons as spirit animals. 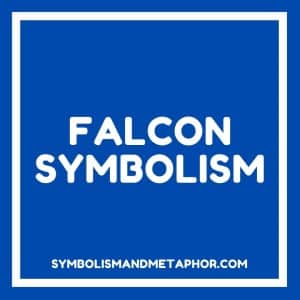 Falcon symbolism can be observed in many cultures – past and present. Egyptians viewed the falcon as a symbol of power and independence; Romans liked them as symbols because they provided them with a symbol of superiority. Today, falcons represent independence and autonomy, two very highly valued qualities of the modern world.