This article discusses wren symbolism, including the following Symbols:

The wren is an interesting bird species that lives mostly in the  Americas. The subspecies of Eurasian wren can also be found in the forests of Europe and Asia. It’s known for its loud and active behavior, although it’s quite rare that you will see it. Most of the time, you’ll only hear their singing.

These birds have been around for a long time, and have lived in a symbiotic relationship with human beings throughout their existence. They’ve become an essential part of the Celtic culture, where they were perceived as an animal that symbolizes activity and determination.

They’re also relatively harmless and friendly animals, although they’re very active in the pursuit of their prey. This active behavior has led them to become a symbol of agility, quick-wittedness, activity, as well as a free spirit, and friendliness.

It’s also interesting how the wren symbolism changes from culture to culture. For Celts, they represented peace and friendliness, while for some Native Americans, wrens carried a mythological meaning.

Here are the main meanings of wren in our culture today.

Wrens almost never stop moving, except for when they’re resting. Most of the time though, they’ll spend their time wandering around, searching for prey, or exploring new areas. That’s why it’s also quite rare to actually see them in nature because they’re constantly on the move.

Their small stature and their quick movements have led them to become symbols of activity and of movement. They’re also very noisy and bold, as they’ll actively protect their nests against everyone and everything threatening them.

Before a wren settles down, it will build several nests. They’re highly symbolic of movement and also instability, so we often connect them to young people who are active in their lives and constantly on the move.

Another typical quality of wrens is their determination to protect themselves and their offspring against any potential predators. They’re quite slippery in the sense that they’re always on the move, always on the prowl so that they don’t get caught by their predators.

And they’ll also protect their nests against anyone. This is a signal of their high level of determination. They’re also famous for their industriousness, as they’ll keep moving and working until they’ve built their nests.

The small frame and stature of wrens and their quick movements make them a symbol of agility. They’ll only reach a length of about 4 inches, although their legs are quite long, which makes for a very agile appearance.

That’s why they’re very rarely seen, but often heard in nature. Their singing pattern is very loud and it’s quite easy to recognize them as they sing. But spotting them is a bit tougher, which is a testament to their ability to hide and move around quickly.

Wrens are friendly animals. They’re not looking to harm anyone, although they will protect themselves if they do get attacked. That’s why they’ve become one of the main symbols of friendliness in our culture, but also in the Celtic culture.

They’re known for their high amounts of social activity, which is symbolized by their singing patterns. Celts interpreted their singing as greeting their neighbors and friends.

Wrens find it hard to settle down. This means they’re somewhat of a free spirit. They’ll build several nests before they settle down and build their family. Like all other birds, they’re free to go almost anywhere they want, although they still need to be careful not to get caught by their predators.

In this sense, they symbolize the ability to move around freely and not being limited by any constraints. They’re fast movers, and they can move to another location whenever they want.

Another animal that symbolizes freedom is the falcon.

The high levels of energy and the quick movements are typical of someone who’s young and full of energy and vigor. This is typical for young people most of the time, so we often connect wrens to younger people who are active and vigorous.

Throughout most of their lifetime, they remain highly energetic and youthful. Because they’re sometimes susceptible to get caught by predators, they’ve developed this ability to move around quickly and to escape their predators.

Wrens like to sing loudly. And their quick movements and high levels of energy lead us to connect them to quick-wittedness. (They share this symbol with parrots).

Sometimes, it seems like wrens are almost talking to us as we enter the forest. Even though we can’t really see them, they seem to be communicating something to us. And the Celts also felt the same.

Wren as a Spirit Animal in Dreams

All of the above-mentioned qualities make wrens a good spirit animal for many people. If the wren appears as your spirit animal, then it symbolizes the qualities of friendliness, care, determination, and industriousness.

They will guide you to become more friendly with your friends and family, but also with strangers that enter your home or that you meet outside. Wrens don’t have any natural enemies, and they’re quite friendly and peaceful animals. Even though they do have some predators, they’re not looking to get into fights, as should you if you have them as your spirit animal.

They’re also famous for their high level of care for their family. They’ll do their best to help their offspring survive and stay safe from potential predators. This means that you should do the same with your family and kids if you have them. They remind us that our family is perhaps the most important thing we have in this world.

Lastly, the wren as a spirit animal tells us to keep working hard until we succeed, and then keep going. They’re very industrious in nature, as they will almost never stop moving and they’ll always look for ways they can improve their situation. You should do the same, and never stop even if you’re already satisfied with what you’ve achieved so far.

The Symbolism of Wrens in Celtic and Native American Cultures

It’s interesting to observe what wrens meant for different cultures of the past and of today. Two of the main cultures that considered wrens as highly symbolic were the Celts and some Native American tribes. The meaning of wrens for both cultures was quite different, though.

Let’s first take a look at the symbolism of wrens in the Celtic culture.

Most of the meanings for the Celtic culture in terms of wrens were positive ones:

Some of the symbols are still present today. However, in the Celtic culture, these symbolisms were even more evident.

The Celts were a culture that was highly engaged with the nature around them. Almost every creature they came across meant something for them, and so did wrens. But even if they rarely saw wrens, they connected them with some positive meanings nonetheless.

Additionally, wrens inspired Celtic bards to compose their own songs. They were thought to be a creature with a very high artistic value due to their loud singing and their nice singing patterns.

And the wren’s active nature also charmed the Celts. Wrens were thought to be an inspiration for Celts to become even more hard-working and industrious. Wrens are very active in nature, so Celts tried to follow their lead and become that themselves. This symbolism is still present today.

Interestingly, some Native American tribes also carried the wren as a symbol. But the symbolism of wren in their culture was quite different from the one in the Celtic culture.

Like with Celts, wrens were thought to have a very close connection with some Native American tribes. These tribes were always very connected with nature, and they were naturally also closely connected with wrens. That’s why many symbolisms grew.

In almost every Native American tribe, wrens had a mythological role to play. They were often a part of various mythological stories and creation stories where they played meek characters that actually had more power than they first appeared to.

For Pueblo tribes though, wrens were the symbols of war. They were thought to have the courage of a warrior, which is why they were symbolic of war.

This discrepancy in the symbolism of wrens is very interesting to observe. 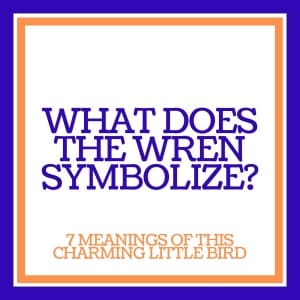 Wrens are lovely little birds that like to be active most of the time. This behavior earned them many symbolic meanings today and in the cultures of the past. They’re also a symbol of activity and determination as a spirit animal.

The main wren symbolism is one of action. This is present today and was typical for both Native American and Celtic tribes.

For more information about the meanings behind birds, check out our articles on the symbolism of flamingos and symbolism of sparrows.