This article will discuss centipede symbolism, including:

When people think about centipedes, there’s usually a very polar reaction – they either like them or they are scared or terrified by them.

Interestingly, centipedes do carry some very peculiar symbolic meanings. The main centipede symbolism is that of balance. After all, it’s always interesting to see how centipedes find the balance to move around and survive with so many legs. It takes coordinated movement to control all of their legs.

But centipedes are even more commonly present in many people’s dreams. Normally, they have negative connotations in dreams and they’re even often present in nightmares. But coming across a centipede in your dreams might also have some interesting meanings to you and your life.

If you’re looking to learn more about the symbolism of centipedes in life and dreams, read on.

> This article is from our series on insect symbolism

The 6 Meanings of Centipedes

Here’s what we normally connect centipedes to:

The first thing that comes to mind when we see a centipede is balance. Many species of centipedes don’t have eyes, so they rely on their balance and their senses to move around and locate their prey.

Because they’re carnivorous animals, they’ll try to locate prey for themselves with their senses. However, they also have to catch the prey, which they do with their balanced movement. And they can actually move very fast – up to 1.3 feet per second.

Their body disposition and the number of legs allow them to move quickly and catch their prey in no time. Other centipedes have eyes, such as house centipedes we might find in our homes, so most of their activity will be done at night. But they still need to have a good level of balance to be able to move around swiftly.

The majority of people are afraid of centipedes. Perhaps it’s because of their somewhat ghastly and scary appearance. Or maybe it’s because centipedes can be pretty venomous and their bites can hurt significantly.

Perhaps this is the main reason why people are terrified by centipedes. But these animals are often depicted as negative and harmful in our culture.

This is an interesting one. Perhaps you’ve already heard about the phenomenon called “the Centipede’s Dilemma”. Put shortly, it’s the action of overthinking your actions that might seem mundane at first, which causes you to ultimately fail what you do, even if the task at hand appears to be simple.

There’s also a poem that carries the same name – “The Centipede’s Dilemma”. It’s basically symbolic of the mundane tasks that seem automatic and simple to us, but when we start to overthink, we eventually fail to do them. It’s partly because most of what we do during our day we do in an almost unconscious, automatic manner – only to fail with it when we think about it.

They’re capable of surviving in a variety of conditions. However, their ability to adapt and to find warm places allowed them to spread even into colder areas of the world. That’s why we still find them all over the world.

They primarily like warmer areas and will actively seek such areas. They’re creative in their behavior and also quite resourceful.

Centipedes inspire creativity. Their peculiar appearance leaves a lot to the imagination, which is why it’s a common feature in art.

The main consensus seems to be that centipedes are parasitic animals and as such, unwanted in your home. After all, they do feed on our food and they will find their way into our homes whether we want them or not.

That’s why the majority of people still treat centipedes as vermin. And they are, most of the time. However, this is typical especially for home centipedes. The ones we find in the wild are actually quite different.

These will be more poisonous and as such, even dangerous to us and other living creatures. All of that leads us to think negatively about centipedes and we tend to see them as parasitic animals we want to get rid of as quickly as possible.

The Symbolism of Centipedes in Dreams

7. Killing a Centipede in Dreams

You’re “killing” a source of dissatisfaction. If you’re not doing this already, then this dream is a sign to you that you should be doing that in your life as soon as possible.

8. Dreaming of a Centipede

If you only dream of a centipede and you only see it from afar, then it can actually have two meanings for you.

The first meaning is that there’s someone in your life that’s treating you badly. This centipede is telling you that you should get rid of this person as quickly as possible, just as you would normally get rid of a centipede from your apartment.

Another potential meaning of this dream is that you’re about to have some good luck. Yes, centipedes in dreams can bring good luck, but only when the centipede is moving away from you or seems uninterested in you in your dreams.

This can mean good things to you. It means that you’re living your life in a balanced way, which allows you to move quickly forwards in life.

A slowly-moving centipede signals that you’re having difficulties to move forward in your life. There might be several reasons for this, but the main reason might be that you have a lot of unfinished work in your life that you don’t want to get to.

It’s also telling you that you should tackle these problems as soon as you can.

Dreaming about centipedes in your bed is a nightmare. Obviously, nobody wants to have that sort of dream.

However, you might experience this dream when you have people in your life trying to take advantage of you. You want to get rid of such people from your life, just as you would want to avoid the centipedes in your bed.

Centipedes are normally seen through a negative lens. Most of the time, they are seen as a threat and as vermin, and perhaps rightly so (much like snakes and spider symbolism). However, there are some positive centipede meanings, too. 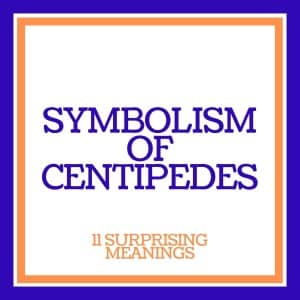 The main centipede symbolism is one of balance. It’s interesting how they’re able to move so swiftly when they have so many legs. We’ve also taken a look at the meanings of centipede dreams and how you can interpret them.