To many people, spiders represent a scary figure. Just a thought about them can scare the life out of them. For others, spiders are interesting and exciting animals with various unique traits.

Throughout history, spiders have been used as spirit animals for creativity and feminine energy, but also protection. Their intricate web-weaving skills have led people to take them as a symbol of creative energy. 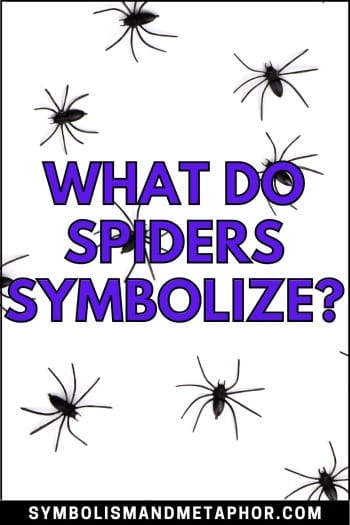 In dreams, we often think spiders symbolize a feminine theme. Sometimes, they also represent something scary or even a threat.

Here’s a summary of common spiritual meanings associated with the spider:

All of these symbols and meanings have been interpreted by how spiders live, behave, and their overall appearance. More often than not, the symbolisms are connected to the spider’s ability to create intricate webs.

What are some of the most common things spiders represent?

The number one thing spiders represent is creativity. This is mostly indicated through its web-weaving skills which are intricate. The web creation follows no rules; instead, the spider creates a complicated web wherever it sees fit.

If your spirit animal is the spider, then you’re likely to be a creative person who likes to think outside the box. In some southwestern American countries, the spider has always been seen as a creative goddess where weaving was considered an art.

Just like almost any animal, the spider has its own way of toying with their prey. It does that by creating a web around the victim, leaving them paralyzed and unable to move.

This makes them a powerful figure. In some American Indian tribes, the spider was equal to the creator of the world, which associates them with a powerful feminine figure with a lot of creative power.

If you’ve ever watched the spider waiting for its prey, then you must have noticed how persistent and patient the spider is. And this is exactly what it represents – patience.

However, it knows exactly when to pounce and start creating the web. When we see the spider on the wall, it looks like an unassuming figure “just standing there”. But there is a purpose behind their standing, which is they are waiting for their prey patiently. This is a virtue we connect spiders to.

In some countries and in some cultures, the spider was the ultimate representation of feminine energy.

For example, in Ancient Egypt, where it was connected to the goddess of the Divine Mother, Neith, representing the ultimate feminine figure. Or in American Indian tribes, where the spider was considered as the ultimate creator by using the means of the female creative energy. 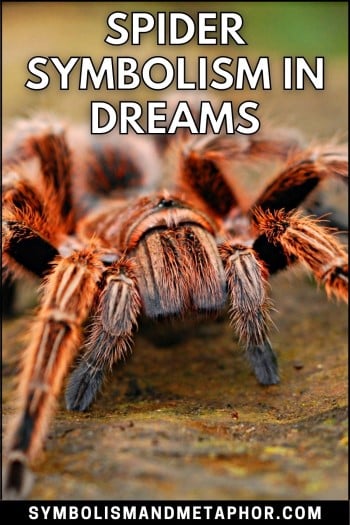 Many people find spiders scary. This has always been the case, though. Throughout history, spiders were commonly seen as dangerous animals who carried sufficient toxins to end one’s life.

The spider’s web is almost invisible unless it’s sprayed by rain, which is when it becomes visible to the naked eye. One of the more negative symbols of spiders is their invisibility and elusiveness.

Spiders also love to hide from us. When they notice us, they might dart away in fear to find cover somewhere behind the table, or behind an object that provides them with safety.

A dream about a spider may be a sign that there’s something that you can’t see, but that you need to look for and pay attention to.

Perhaps you could argue this is both a positive and negative trait. When we think of a spider weaving the web, we often connect it to higher life meanings. Spiders are often connected to their ability to create or influence someone’s fate. There’s an element of “controlling one’s life” when we think about spiders.

It can also be connected to being able to weave one’s way through life and having the ability to influence the lives of others.

Spiders are also sometimes connected to our negative traits, parts of us we don’t want others to see. It also may be parts of us we find disturbing or unworthy of love. This part of us is often called “our shadow self”.

A vision of a spider may be a message from the universe that your shadow self is trying to emerge.

The Symbolism of Spiders in Dreams – 3 Meanings

What does it mean when we dream about spiders? Here are three meanings that can help you make sense of your dreams.

9. A Spider Represents a Woman Figure in Your Life

When you dream about spiders, they might represent a woman figure in your life. Perhaps it’s trying to tell you something you should know. The spider is relaying you messages about the directions you’re taking with women in your life.

The woman a spider represents can be the woman that has the same traits as spiders, which are:

Take a moment to think about what the spider was doing in your dreams. This is the message you should take from the dreams and interpret them through real life.

10. You Were Afraid of Something

As we’ve already seen, the spider has sometimes a negative connotation of fear. If you encounter it in your dreams, then it might mean you have been afraid at some point during your day or even during your dreams.

To learn more about this, you really need to try and remember more things from your dreams. Try to think about the atmosphere of dreams. Was it scary, or was it slightly adventurous?

In both cases, the spider can actually represent the feelings you encountered during the dreams.

11. You Are Trying to Repress Something

If you encountered the spider in your dreams and you tried to kill it, then it also has a deeper meaning.

The spider might also mean you’re fighting within yourself and that there’s something that doesn’t feel right in your life.

The Spider as a Spirit Animal

If your spirit animal is the spider, then you must be aware of the following things.

The Spiritual Meaning of Spiders in your House

There’s a chance that, when you need focus on your creative side and you spread creative energy in your home, you may start to see more and more spiders around you.

But seeing the occasional spider around the house may also be a reminder that you should focus on these energies. Spiders are both drawn to and reminders of the importance of femininity and creativity.

The Symbolism of Spiders in Films

Spiders are usually used symbolically in films to represent something creepy and evil. Charlotte’s Web is one notable exception.

Aragog, the giant spider from Harry Potter, is perhaps the most notable spider featured in films in the past few decades. Aragog is unequivocally a scary, fearsome, and flesh-eating creature whose children eat humans! Here, we can see a common motif of spiders in films: they’re creepy, scary, and evil.

But interestingly (and consistent with J K Rowling’s characters), there’s more to Aragog: he’s also beloved by Hagrid and has loyalty and respect for him. Furthermore, Aragog clearly loves her children, showing complexity to the otherwise creepy charcter.

Charlotte’s Web depicts spiders in a more caring, nurtuting role. The spider here is very feminine and shows a great deal of caring for the pig, who she tries to save from death. The spider, Charlotte, is a creature who symbolically stands between life and the afterlife. She tries to save the pig, but also loses her own life in the book and film.

Thus, we see in Charlotte a creature of sacrifice, but also a creature (like many other spiders) who is symbolically tied to death – whether it’s by the spider taking a life or protecting it.

Spiders are highly symbolic animals. They have both positive and negative connotations, and they also sometimes feature in dreams. Spiders are sometimes seen as a danger (in much the same way as centipede symbolism), and they are also feared. But we also know them by their ability to engineer and craft webs and they are also revered for their patience for achieving their purposes.

Spiders can have different meanings in different settings, so you need to view the symbolism of spiders in your own circumstances to see their true meaning.