Deer have a long history as acting as symbols in our lives. From religion to dreams, deer are often seen as having deeper meanings.

Deer commonly appear as icons of worship, manifestations of gods, and prizes in folklore and myth. They also have a strong association with the supernatural world too.

In this article I’ll take a deep dive into what deer symbolize in dreams, popular culture, mysticism and religion.

(If you’re interested in more specific articles, we do have ones on the symbolism of moose and antler symbolism that you can check out, too.)

The Symbolism of Deer: Mythical and Mystic Metaphor

Overwhelmingly, we see deer as signs of innocence. They are feeble, weak animals who are towards the bottom of the food change. A deer is often being stalked and hunted. When it sees headlights, it reacts with fear. And when it’s in an open meadow, it looks incredibly vulnerable.

This symbol of innocence is perhaps best represented in the figure of Bambi, the weak, innocent and wide-eyed fawn from the Disney movies of our youth.

Appearing in Romanian, Scottish and Persian fairy tales as cursed or disguised princes or princesses, deers also appear as helpers in other stories. In the Italian fairy tale The Dancing Water, The Singing Apple, and The Speaking Bird, for example, the animal even appears as a foster parent to abandoned royal siblings.

Alternatively, in another Italian fairy tale, The Enchanted Doe, an ogre chooses to shape-shift into a deer in order to seduce a young prince.

Similar to fairy tales, deer make several appearances in fables too. The Indian fable A Deer Without a Heart, which is actually attributed to Aesop, features the creature being tricked into its demise at the jaws of a lion by a sneaky fox. Here the animal represents idiocy, based on the fact it’s so easily manipulated.

Great works of art often feature the forms of deer inspired by aspects of Greek myth. One such work, Heracles, Telephus, and The Doe, represents Heracles’ son Telephus brought to safety and being raised by a female deer. The animal also bears strong associations with the story of the virginal huntress Artemis and her seduction of Actaeon.

The Deer Woman is a spirit animal in Native American folklore related to fertility and love. Usually appearing as an alluring young woman or deer, the figure was taken by many tribes to be a symbol of personal transformation or a warning. In certain cultures, particularly that of the Ojibwe, it was believed the figure could be sent away by tobacco smoke or ritual chanting.

Rudolph the Red-Nosed Reindeer is another popular image of a deer that has ties with a festive legend. A fictional invention of author Robert Lewis May, Rudolph has since transcended into Christmas lore as the lead on Santa’s sleigh. Rudolph has also appeared in numerous films and TV shows, including The Grinch (2000), Fred Claus (2007), and Doctor Who (2012).

In stark contrast to the wholesome image of Rudolph, a deer is also the main image of Furfur, a winged demon. Charged with the power to create storms, thunder, and lightning, Furfur are staples of paranormal storytelling and horror narratives.

Deers feature prominently in Abrahamic faiths like Islam and Christianity as well as in Eastern faiths like Buddhism, Hinduism, and Shinto. Here we take a look at some of their more unusual representations.

In the ancient Japanese religion of Shinto white deer are thought to be messengers from gods and feature on many of the nations’ shrines and tombs. Also serving as a symbol for the city of Nara, there is even a “deer dance” that’s performed as part of an annual ritual in parts of northern Japan.

The Jewish faith features a giant stag in its mythology according to parts of the Talmud. Called by the name “Keresh”, the creature is said to live in the mythical forest of “Bei Ilai”. A deer also features as a character on the banners of many Jewish tribes.

Curiously, the Torah, Judaism’s religious text, also cites the deer as one of ten edible animals it considers kosher.

Due to the influences of the Ottoman Empire, Turkic people introduced several traditions and rituals involving deer antlers, hoofs, coats, and horns into the Islamic faith. A 13th-century holy man in the faith, referred to as ‘Father Deer’ was said to live with a deer in the hills of northwestern Turkey.

One of the Upanishads in Hinduism talks of a goddess Suraswati taking the form of Rohit, a red deer. Known as a symbol of learning, the stories of Suraswati influenced wise Hindu men to decorate their homes with deer hides.

A golden deer also features as a disguise for one of the minions of the evil Ravana in the Ramayana, one of the major Sanskrit epics of the faith. In the text, Rama is dispatched by his wife Sita to find it. The purpose is to separate Sita so that she can be kidnapped.

A deer with antlers lit by candles appears as a figure in 14th-century Christian legend. Appearing to the king of Hungary while hunting in a forest, the deer was taken to be an angel sent by God, his candle-lit antlers mistaken for golden wings. According to the myth, the location of the deer was to mark the construction site of a new cathedral built in honor of the Holy Virgin.

This story is also recognized as the legend of Saint Eustace where the deer serves as a marker for piety and dedication to the faith.

Evoking longevity, happiness, and peace, the Buddhist faith treats deer in an even more positive light. Recognized in the religion as timid and shy animals, their depiction in cultural sites paints them as locations of purity without fear. Buddha was also said to be a golden deer in one of his previous lives too.

Aside from having their place in ancient and older faiths, the image of the deer still permeates into lots of areas of modern culture too. Unlike the modern idiom of “being trapped like a deer in the headlights”, the animal is far from helpless or paralyzed in either of these appropriations.

Fans of the book and movie series Harry Potter will immediately recognize the image of a deer as the Potter family’s Patronus, a defensive spell to ward off evil. Severus Snape, one of the series ultimate villains turned good guys, also features a doe as his Patronus. There it serves as a symbol of his undying love for Harry’s mother and helps guide him to the Sword of Gryffindor.

The classic Disney film Bambi, a tear-jerker first released in 1942, features an orphaned deer as its main character struggling through life only to grow into a great stag. Symbolizing the cyclical nature of life and how resilience is built through loss, Bambi is still a cultural icon thanks to frequent re-releases.

The symbolism of deer has varied widely across countries and cultures throughout history. In certain areas of mythology, they carry a sinister vibe. In others, they stand for love and devotion. 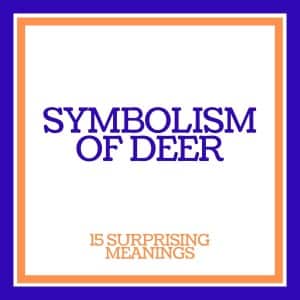 Another interesting thing about the deer is how it’s crept onto commercial licensing and branding too. From the farm machines of John Deere and the speeding image of a stag, to clothing emporium Antlers and their instantly recognizable logo, the animal, and it’s key features, is everywhere.

Sadly, it remains to be seen whether game hunters consider any of this when stalking these magnificent creatures in the forest. Could they be more than just trophies?