If you’ve ever witnessed a moose live with your eyes, you were most probably impressed by its appearance. It’s such an elegant and unique animal that signifies pride, strength, and self-esteem. It offers such an imposing figure that might make you shake in your boots – scared, even. 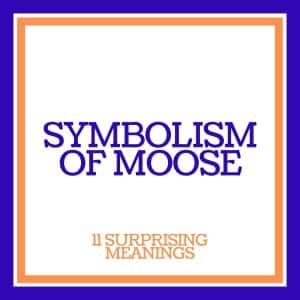 Because of that, a moose is also a symbol of dominance. And while the antlers might seem like intimidating too, they play an essential role. For males, they are used to attract females, so moose are also symbols of attraction.

There’s also an element of individuality and self-sufficiency when we think about moose. This is especially true when we talk about male moose, who prefer to keep alone most of the time. Let’s take a look at the symbolism of moose.

The Meanings of Moose

These are some of the most common meanings of moose.

Moose are proud animals that aren’t afraid of anything that might come their way. Especially male moose tend to be symbols of dominance. With their imposing figures and antlers, they are undoubtedly proud animals.

In general, moose are animals that you don’t want to upset. They’re also a dominating figure in their environment, which is something these animals are proud of. Because of that, moose are seen as symbols of pride.

A moose is a big animal, especially male moose. They can reach about 6.5 feet in size, which is more than the average size of a human being. Because of that, we see them as imposing and strong figures, especially if we see them live.

If you’ve ever seen a moose in nature in the wild, then you must have been impressed by its size. Also, the larger the antlers it has, the more intimidating it seems. The sheer size but also the bulky build of the moose makes them a symbol of power.

The male moose possess quite a lot of fighting power. But females will also fiercely protect their offspring if they become endangered.

Despite their bulky build, moose are actually quite elegant animals. With their long, tall legs and their swift movement, it seems as if they are gliding when they are running. They can move very quickly in the wild, as they are capable runners, thanks to their long legs and their elegant body.

When they run at full speed, they reach a speed of about 35MPH. But when they trot, they can also move around quickly – at around 20MPH. Interestingly, moose can also swim and they will even submerge when the ice melts and there’s a lot of water. They tend to feed on plants that are found below the water surface.

Moose is also symbolic of our self-esteem. They’re confident animals, able to take on almost any other creature they come across in the wild. They aren’t intimidated by any animal they fight in the wild.

Even if the other animal is larger in size, the moose will fight if it’s to protect their offspring. And their big figure alone shows us they’re confident in how they go about their lives. This makes the moose symbolic of confidence.

Moose like to be alone, especially male moose. They’re highly individualistic, although they also provide for their family when needed. They represent this strong, independent creature that is not afraid to create their own path.

A male moose always tries to assert dominance in his habitat. This means he tries hard to push competitors away and make sure he has enough for himself. This authoritative behavior is made easy because of their strong and big frame. They’re symbols of authority because of this.

The Symbolism of Moose as a Spirit Animal

The moose as a spirit animal represents pride, strength, and confidence. That’s why the moose is a highly popular spirit animal.

As a spirit animal, the moose guides you through your life to allow you to get through difficult moments with ease. You’re strong and confident no matter what happens to you, and no matter how threatening your opponents might seem.

It also symbolizes that you should take some time to develop your self-esteem, which will get you through these times. Just like the male moose, the moose as the spirit animal guides you to develop self-confidence.

If you have the moose as your spirit animal, it also means you should be bold and confident in all areas of your life. The moose is a good spirit animal for both men and women. For men, the male moose encourages them to be confident and strong as a man.

The moose as a spirit animal for men is also beneficial for showing their masculine strength. The moose shows this with his antlers and his impressive body, while a man should also show it with his behavior and his physique.

For women, the moose as a spirit animal encourages elegance and attraction.

The Symbolism of Moose in Native American Culture

The moose plays a prominent role in Native American mythology. The name of the moose itself stems from the Native American culture, although the true meaning of the word is still somewhat unknown. Originally, they were called moz or mus.

Moose were often seen in the Native American cultures – especially the cultures from northern parts of North America – as symbols of clans. This can be said of the Chippewa clan, as well as the Menominee clan.

For most Native American clans, moose were meant as one of the primary sources of food. They were also symbols of strength and life. In other parts of North America, the moose was treated as a respected animal that wasn’t to be touched.

Interestingly, the Native Americans also had a creation story that involved the moose. In one of the creation stories of the Potawatomi tribe, there were no people on Earth except for one Potawatomi woman looking for a companion.

There were plenty of animals that she could take as her companion, though. But none of them were strong enough for her to become her life mate. She sent out invitations to all of the animals but none of them seemed right.

One day, this Potawatomi woman found herself facing the great Moose. This is when she was convinced the Moose had all the qualities to become the life companion. This is an interesting story that tells us about the importance of moose in the Native American culture.

The 4 Meanings of Moose in Dreams

What does it mean if you dream about moose? It’s possible, although it’s quite a rare dream. But for this reason, it’s even more symbolic and it’s telling you something about you and your life.

Moose are strong and elegant animals and the largest deer species in the world. They symbolize strength, confidence, elegance, individualism, and attraction. The symbolism of moose was also present in the Native American culture, where they were mostly used for food, but also played an important symbolic role.

For more information on symbolic meanings of similar four legged creatures, check out our articles on deer symbolism and the youthful symbolism of lambs!