A lamb is a young sheep that is still weak and defenseless when unprotected and alone. Because of this, lambs are targeted by predators because they present easy prey to them. When lambs are left on their own, they either get hunted down or stuck and lost, so they need guidance. 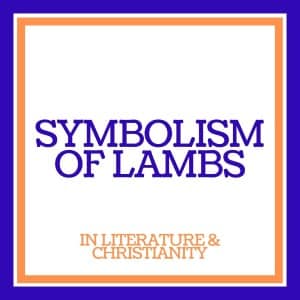 These are the qualities that make lambs so symbolic. They are a sign of innocence, purity, vulnerability, and sacrifice. Many of these symbols overlap with the symbolism of youth.

In this article, we’ll discuss the symbolism of lambs in Christianity, literature, and life. You’ll find some interesting meanings that you perhaps didn’t know about before.

The 8 Symbolisms of Lamb in Life

As such, lambs are innocent animals that are still naive and new to life. They don’t have the experience nor the ability to protect themselves, so they stick to groups instead of wandering away on their own. They’re also oblivious to the dangers around them.

Because of that, lambs represent innocence – sometimes, even human innocence. They are not aware of what is out there and how the world looks like – they need to be guided and protected by the group.

Lambs are small and weak, and they do not become sheep until the age of 1. They can’t protect themselves alone, so they need to stay in groups or be protected by their parents. If they stray away from the group, the likelihood of their survival is close to zero.

It is this vulnerability of lambs that made them so symbolic, even in Christianity. They’ve become the symbol of God because they represent the weakest, vulnerable part of God, the part which is always willing to give to the humans.

Not only lambs, but sheep can be a representative of an individual’s vulnerability. As spirit animals, sheep (and lamb) denote that someone is vulnerable in their character. It’s symbolic of someone who needs support from others in times of need when things get tough, just like lambs do when they are in danger.

As lambs are fresh and new to the world, they are free from sin. This is one of the most revered qualities of Christianity and a huge reason why lambs are so symbolic in Christianity, too.

The wolf is impure, while the lamb is pure and weak. The wolf is the hunter, greedy, and looking for food, which can represent our dark side of our character. On the other hand, we have lambs that are pure and vulnerable, and sometimes even weak. In a way, it’s a collision of two different parts of our character.

Lambs have always been sacrificial animals. From the Ancient Greeks and Romans to Christians and even later civilizations, lambs were used for sacrifice to a higher purpose. In most cases, it was the sacrifice to Gods.

According to Merriam-Webster, the term sacrificial lamb represents something or someone that’s sacrificed for the greater good.

Even today, lambs are used for sacrifice in Passover sacrifice, which was an important part of the Israelite faith. Today, it’s only practiced by Samaritans at Mount Gerizim. In most cases, the sacrifice of lambs represents something that’s beneficial for the greater good of the community.

In the Abrahamic religion, a lamb was and is a very highly valued possession. This term of the sacrifice of the lambs is widely present in everyday life, too. A good example of this is in politics, where a sacrificial lamb is a candidate in elections who has little or no chance of winning an election but is still representing the party for the greater good.

We’ll touch on the meaning of the sacrifice of lambs in Christianity later on, because there are many references to it in the Bible, too.

Lambs are also highly symbolic of family. They are often depicted in Ancient paintings and works of art together with a sheep and a ram, which is obviously a symbol for the family. The lamb is the child, the sheep is the mother, and the ram as the father.

When we think about it, lambs can also represent children in a way. They are both young, naive, and new to the world, and also not aware of the real world around them. They are oblivious of the bad things happening in the world, and also somewhat unable to survive with the help of their parents. They represent the same qualities, such as innocence and purity.

Herd behavior is obviously typical for animals – they form herds without a centralized leader for the purpose of staying safe and without directions. Lambs can represent that to an extent. It also represents a degree of naivety and a lack of introspection where individuals follow vague beliefs and directions by someone else. Without a “shepherd”, they are lost.

Sometimes, this term is coined in financial settings where investors follow other investors blindly based on prior results or false beliefs.

This symbolism is similar to the symbolism of childhood. Lambs don’t know how to decide for themselves, so they follow others. And when they do that, they might not follow the best examples – they only follow the ones they find the strongest and most convincing.

This naivety can lead them astray in their later years. Just like teenagers get lost, lambs and sheep can get lost themselves and might find themselves in danger. They can either get stuck somewhere or hunted by predators.

The Symbolism of Lambs in Christianity

Lambs are one of the central symbols of Christianity. They represent sacrifice and purity, two of the most important pillars of the Christian faith. As such, they are highly symbolic of God himself, who is pure and sacrifices himself for his followers.

Lamb also signifies innocence in Christianity. It’s symbolic of everything that’s innocent, including Jesus Christ himself. This is visible in several passages of the Bible, including this passage from Isaiah:

“The wolf shall dwell within the lamb, and the leopard shall lie down with the kid; and the calf and the young lion and the fatling together, and a little child shall lead them.”

In Christianity, lambs are also sacrificial animals, which is often denoted in the Bible itself, too. They also represent Jesus Christ’s sacrifice for his followers and the sacrifices we make for the greater good.

This is visible in the Book of Genesis where Abraham sacrifices the lamb which is provided by God, which is the perfect sacrificial offering.

However, perhaps the most notable symbolism of lamb in Christianity is that of the true Lamb of God. The lamb of God is also synonymous with Jesus himself, who is seen as the sacrifice for the rest of his followers and for the rest of humanity. This is portrayed by John the Baptist in his passage (1:29):

“Behold, the Lamb of God, who takes away the sin from the world!”

The Symbolism of Lambs in Literature

Because lambs are so symbolic, they are often present in literature, too.

One of the most notable examples is the poem by William Blake called The Lamb. In this poem, the lamb is the subject and the main “protagonist”. It represents the perfect creation by God, and it gives wool to humans, which is a gift from God himself. Also, Blake describes the voice of the lamb “tender”.

The entire setting of the poem seems somewhat idyllic and pastoral. Perhaps the lamb is symbolic also of beauty and perfection, and also of the nature that is so beautiful (which is described in the poem).

By the end of the poem, the term lamb is synonymous with God who created the lamb. God is represented by a small child and the lamb is his creation.

Lambs are historically and symbolically very notable animals. They’ve been used as sacrificial animals centuries ago, even by Ancient Greeks and Romans. They represent innocence, purity, and sacrifice. They are also symbolic of naivety, childhood, and family, and also belonging.

Because of their traits and features, lambs are highly symbolic also in Christianity and literature, as well as in other faiths (Israelites and Abrahamism). It’s interesting to explore the symbolism of lamb and the different meanings of lamb – some are even unexpected!