Jade has long been regarded as one of the noblest types of stone in the world. Because jade is relatively rare and mighty, it’s been used all around the world by the nobility, particularly in the East. Rulers in China bought jade stones as they were meant to be omens of good fortune. 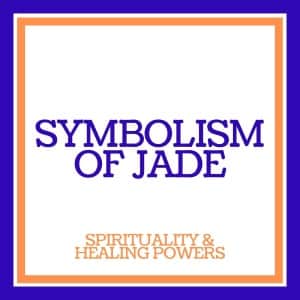 The symbolism of jade nowadays is mainly connected to its healing powers. It’s been serving mankind as the healing stone for centuries. It is said that everything jade touches gets healed. Because of this power, jade is often present in alternative healing methods.

Jade also plays an important role in spirituality. In terms of spirituality, jade is regarded as the Dream Stone that gives access to our spiritual world, and encourages us to understand our dreams better and dive deeper into them.

Let’s explore the symbolism of jade and how it is present in our lives, what it means in spirituality, and why it’s so important for alternative healers.

The Symbolism of Jade

Jade has been around for several thousand years now. There’s evidence that it was present all the way back from 5000 BCE. Back then, it was mainly present in Asia – Burma was one of the earliest cradles of jade.

However, it was quite a rare stone, too. That meant that only the upper classes could afford to buy these sorts of stones, and they were meant to bring luck to whoever found it. But as the mining methods improved and as international trade was established, jade became present in all parts of the world.

The demand for jade exploded in the 18th and 19th centuries. Mighty rulers wanted to have this rare stone from China that was supposed to bring luck. One of the first rulers that started collecting jade stones was Emperor Qianlong of the Qing dynasty. He was the Chinese emperor from the 18th century.

In fact, he was so obsessed with jade that he started a mass trade route from Burma to China, only to get this stone for himself. But as more and more jade started collecting, he started trading it for higher prices to the Western world.

Because jade can bring luck to its owners, it became such a highly sought after resource that many people from the upper classes of society – especially in China – started looking for this stone obsessively.

In the East, jade was the alternative for gold from the West. But the interesting part is that jade was present at very early civilizations – they even made tools and weapons from jade, especially in modern-day China.

However, the stones that the emperors were after were different. These stones were polished and thus, had a special appearance to them. They looked smoother and far more sophisticated than the jade used for weapons and tools by the early folk.

Jade gems and necklaces started being produced as omens of good luck – emperors and noblemen gifted them to their lovers and concubines, and even to their families. They also collected stones both because it was noble to do so and because they brought luck (or so they thought).

Jade is also known for its healing properties, and it carries a mood of positive energy about it. It exudes positivity and eliminates negativity, which is why it’s so popular with healers – and was popular for centuries, too.

As such, jade was used in Feng Shui and is nowadays used in alternative healing methods (which we’ll discuss later on in this article).

The Chinese not only considered jade to be a stone of luck, but also a bringer of prosperity. The famous Chinese saying goes like this: “Gold is valuable, but jade is priceless.” It’s obvious to see just how valued jade was.

That was because it was an expensive stone back then, but also it brought luck and it had many healing properties, which is why the Chinese valued jade more than they did gold.

It’s also partly down to the rarity of this stone. While it was present for centuries, it was only in the 15th and 16th centuries when people started to realize just how valuable jade is. Soon, it was being traded from East to West, and countries that possessed jade started to become prosperous.

Jade is a symbol of beauty. Because it’s so easy to craft and change this stone, many craftsmen consider jade to be the ultimate stone to work with. Compared to other types of stone, jade becomes even more beautiful when it’s changed.

Many Chinese proverbs use the word jade to describe beauty, elegance, grace, and even importance. And that’s why jade even became a favorable attribute that one would use to describe a beautiful person. In China, it was the ultimate compliment if you would call a woman a “jade woman”.

Because jade occurs in so many different colors, it can also be described as the stone of versatility. And each color represents something different on its own.

For example, the green jade color represents friendship, harmony, and renewal (which is also the most common type of jade). Red jade, on the other hand, is the symbol of love, life, and energy. Yellow represents optimism, while orange is ambition.

These are the most common colors, although there are many other types, too. There’s the blue color (freedom), purple (ambition), black (elegance), and white (purity).

One of the more important properties of jade in alternative healing is positive energy. It eliminates the negativity inside the recipient’s body, and it replaces it with positivity. The recipient would, with the help of jade, become accepting of themselves and of others.

Another important property of jade in alternative healing is purification. It’s a stone of purity, and it will cleanse one’s soul and one’s body of the impurity inside. Whether that’s mental impurity or physical impurity, jade is meant to bring a level of balance into the body of the recipient.

Jade can also soothe anxious situations, so it is known for its calming effects. Orange jade especially is useful for this. It is used to spread tranquility and inner peace to the recipient. The green jade is also known for its calming capabilities, so these two types of stones can work in combination with each other.

Another important meaning of jade in alternative healing is harmony and balance. As such, jade is not an aggressive type of stone; instead, it brings steady and smaller changes that are beneficial to the recipient in the long-term. It stabilizes the internal system and balances out imperfections steadily.

Because jade is widely present in the East, it was very common in Feng Shui. The practitioners of Feng Shui use jade to bring a level of harmony and balance, as well as stability to the person undergoing the treatment.

The Meaning of Jade in Spirituality

Jade is also known for its metaphysical meanings and spiritual concepts it brings to the table.

It is meant to be the ultimate “Dream Stone”, and it has been described as such in many different civilizations from history. It was thought to bring the connection to the spiritual world so that the people were able to gain access to the ritualistic knowledge.

Additionally, jade was also a symbol of protection. It was the protective talisman that people would carry with them and protect them. It would ensure the wearer a long life, and peaceful death.

Often, jade was a popular gift because it would make sure that the recipient would get luck in their life. It was also an amulet of good friendship and good wishes for the future. And because it was a protective stone, anyone that could afford it was to buy one.

Jade is such a powerful type of stone that has dominated Chinese history. It was present as a stone of nobility and rich people, and it was also thought to bring luck to the owner.

And because the stone was quite rare, it was also expensive. Soon, it became an important trading resource that would bring important resources upon which China was built.

Jade also has healing abilities and spiritual properties, which is why it’s widely present both in spirituality and alternative healing methods.