Innocence can take on multiple meanings. In legal terms, innocence is a positive thing. It denotes that someone is not guilty of a crime they’ve been convicted for. In some other contexts, innocence might represent inexperience or a lack of knowledge. 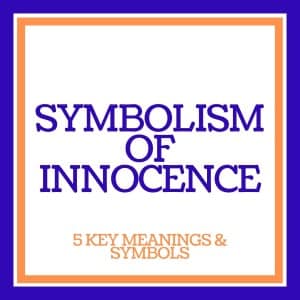 The symbolism of innocence is thus a highly variable thing. Depending on the context, it can represent different things.

In Christianity, for example, innocence is a highly sought-after virtue that is symbolized by lambs. Let’s dive deeper into the symbolism of innocence in life, literature, Christianity, and take a look at what symbols represent innocence.

Children are some of the most innocent creatures on Earth. They are still naive and not aware of the dangers around them. They’re also yet to see the evil in the world and what a man is capable of.

They’re also not fully aware of the world around them, and what they are capable of. It’s often in the teen years when children start to get exposed to the real world and they start to lose their innocence.

They get introduced to the adult world, and they find many things fun and even rebellious – things like drugs, alcohol, crime. That’s when a child starts to lose innocence.

This is heavily connected to Christianity, but white has long been used as a symbol of innocence and purity. In many paintings and even Hollywood movies, Jesus Christ is depicted wearing a white tunic, which is the ultimate symbol of purity and innocence.

White is a highly respected color in Christianity. But even in our everyday life, white is seen as the color of purity. The wedding bride often wears a white dress, depicting her innocence before the marriage.

This symbol is quite similar to children. Newborn animals are powerless and often weak. They are not aware of the dangers around them and are too naive to survive on their own. Because of this, they are often seen as innocent.

Besides, newborn animals look very innocent. They’re not fully aware of their surroundings and can get preyed on if they are not protected by their parents.

The lamb is a very common symbol of innocence. Again, it’s a creature that is often depicted on Christian paintings as the symbol of purity.

Gardens are also sometimes the symbols of innocence. They are pure and offer people a place of rest. There is certainly something very pure and innocent in being in a garden.

As such, this concept has been around ever since the Middle Ages. In literature, gardens were also known as Locus amoenus (pleasant place). This was either an open field with clear skies and a beautiful landscape, or a garden filled with flowers.

It was this idyllic place where people would find comfort and rest. In many ways, they were also connected to the Garden of Eden, which is yet another reference to Christianity.

Untouched land is also innocent. It hasn’t been touched by humans. As such, it is pure and very primal.

There’s something very elementary, yet very pleasing when we find ourselves in untouched nature. Because humans have resculpted the vast majority of the Earth’s surface, it’s refreshing to find places in nature where the human hand hasn’t reached.

The Symbolism of Innocence

Here’s what innocence represents in our lives.

Speaking in purely legal terms, innocence is a positive virtue to have. It denotes that the person that’s been convicted of a crime is not guilty of committing it.

It’s perhaps the most basic and the most elementary type of symbolism of innocence. It’s also the type of innocence we meet most commonly in our lives. It’s present in our everyday lives, not just in legal settings. For example, someone may be innocent if they’ve been convicted for doing something they haven’t done.

When we say someone’s innocent, we might also mean they lack experience in a certain area of life. For example, it’s commonly used in relation to one’s sexual experiences. Or, when someone has little to no experience with dealing with a certain aspect of life.

“Young and naive” is a combination of words we hear often about someone who’s reckless and inexperienced. We could also say they are “innocent” when it comes to having life experience.

We often attribute this feature to younger people just coming out of childhood. It’s a time when we are learning new things and getting experience in various aspects of our lives.

You can read more about the symbolic meanings of young people in our article on the symbolism of youth.

There’s an element of purity about innocence. When someone’s innocent, they are pure of sin. This is especially applicable in situations where someone has not committed a criminal offense.

There’s also an element of purity in religion – for example, the Christian faith preaches that a person should stay “pure” before they wed, referring to staying innocent sexually prior to marrying. We’ll touch more on innocence in Christianity later on.

The Symbolism of Innocence in Literature

Innocence is a highly popular symbol in literature. In many ways, we can connect it to the very start of Christianity and literature as we know it today. It’s omnipresent in the Bible, but we’ll take a closer look at that later on.

As already mentioned, the Garden of Eden is a symbol of innocence in itself. It represents paradise where everything and everyone is innocent, and where everyone is enjoying themselves.

One of the more notable novels where innocence is present is Harper Lee’s novel To Kill a Mockingbird. The mockingbird itself is the symbol of innocence in this novel. It’s described as this harmless creature that simply sings songs to human beings. The main protagonist of the novel is a child, and the question of innocence is present in multiple layers of the novel. Ultimately, the character grows up and has to get awareness of the world around them.

You could argue that the symbolism of innocence is also present in some other similar works of literature, such as The Catcher in the Rye, A Farewell to Arms, and Lord of the Flies.

Another novel where innocence is a constant symbol is The Age of Innocence by Edith Wharton. It describes the troubled marriage of Newland Archer and May Welland – the couple is finding it hard to play by the 1800s society rules, which were strict. Flowers were used instead of words to convey ideas that might have been socially unacceptable back then. The lily of the valley is a flower that plays the role of purity and innocence in the novel.

Similarly, lilies are often present in Shakespeare’s work as a symbol of purity and innocence; for example, in Love’s Labour’s Loss or in Henry VII.

The Symbolism of Innocence in Christianity

Innocence and purity are two of the pillars of Christianity.

Jesus Christ himself is a symbol of innocence and purity. He’s free of sin, and he stands for everything that’s against sinning. He’s also conceived through the Holy Spirit and without sin, as his mother, Mary, conceived him while a virgin.

The Virgin Mary is also innocent, as she is said to have conceived Jesus through the Holy Spirit while still a virgin. She is yet another symbol of innocence.

There are various symbols inside the Christian faith that depict innocence:

In the Bible, innocence is mentioned often. It’s one of the leading themes of the Bible, as it’s the main symbol representing Jesus Christ and his innocent nature.

Innocence is a powerful symbol. The symbolism of innocence can be seen in many areas of our lives. Children are the perfect symbol of innocence: they are naive and unaware of the dangers of the real world.

There are many symbols that represent innocence, too. A lot of them are tied to Christianity, and they are also widely used in literature, too.