Vampires are folklore creatures that survive from feeding on vital human essence – most commonly blood. They are fascinating creatures that existed in European folklore of the 17th and 18th centuries. 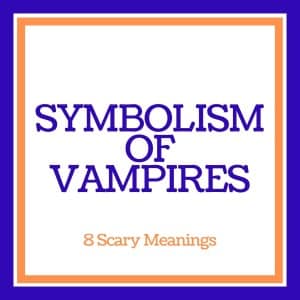 Since then, vampires have become so popularized and familiar that they are widely present in our culture. We see them in movies, books, and even works of art.

And because they try to hide when the sun comes out, they are somewhat mysterious and secret, too. They are such a polarizing figure that people either love or hate. Some people even dream about them!

In this article, we’ll discuss the symbolism of vampires – what they represent in our lives and what they can mean in dreams.

Contents show
The Symbolism of Vampires
1. Death
2. Dread
3. Our Darker Self
4. Secrecy and Mysteriousness
5. Fear
6. Rebellion
7. Darkness
8. Negativity
The Meaning of Vampires in Dreams
Final Thoughts

The Symbolism of Vampires

Here is what vampires could represent in our lives.

There’s an element of worry when we think about vampires. They are these vile creatures that try to suck the life out of humans by sucking the blood out of them. That’s why they’re often connected to death.

In Bram Stoker’s novel, Dracula, the main character (Dracula) was an undead creature that fed on the blood of others to survive. Dracula would try to spread this undead curse to other people by sucking the life out of them.

That’s why vampires are often deemed as symbols of death. They’re somewhat scary, and there have been many interpretations of Dracula through movies and TV series.

Stoker’s Dracula was actually based on a real character. It was Vlad the Impaler – perhaps you’ve already heard of him. He’s known as one of the most dreaded characters in human history – most probably, because of his dread-inducing treatment of his vassals.

He was a ruler of Wallachia (present-day Romania) in the 15th century. He was particularly cruel towards his enemies – he used methods of torture, unlike all other rulers. Some of them included boiling enemies to death and impaling them so that they would suffer.

Obviously, Stoker’s novel was a bit exaggerated while trying to copy the real-world ruler. But the image still persists – Vlad the Impaler, also sometimes known as Dracula. He was known for impaling his foes, although Dracula’s way of doing things was slightly different.

Anyone can become a monster if they want to – which is why a lot of us connect with vampires on a deeper level. Jung calls this “the Shadow” – our alternative character, which is fuelled by our real desires (which we try to hide so desperately, at times).

Vampires are free of guilt; they do what they have to do in order to survive, and they feel no remorse or shame for what they do. They represent our darkest wants and desires, which are sometimes deeply hidden underneath our “facade.”

And because vampires are so desperate to remain hidden and anonymous, we often connect it to our darker self. We also like to keep this part of ourselves hidden from the world.

Vampires are an enigma – in many movies and TV interpretations, vampires are depicted as dark and mysterious creatures, waiting for their prey to become vulnerable so that they strike – in secrecy, of course.

Nobody is really able to track the vampires down until they strike and kill the protagonists one by one. Everything is done discreetly and secretly, though.

Even if they are horrible creatures, we are still somewhat fascinated by vampires. Because they are so enigmatic and secret, we still want to know what they are, and how they work. This mystery around vampires is fascinating to many.

There’s something so scary and even horror-inducing about vampires. Nobody wants to see them or face them.

In almost every movie interpretation of vampires, they are seen as these horror-inducing creatures. They play an important role in horror movies. In fact, some of the oldest movies in the movie industry were about vampires.

A good example is Nosferatu, one of the earliest movies from 1924. Or the Russian movie Dracula, which dates all the way back to 1920. And even if those movies were silent, they were still pretty good at depicting vampires as these scary characters.

Perhaps you’ve already seen a teenager with a vampire tattoo… Well, vampires are actually a symbol of rebellion.

Because they are so secret, vampires often face the world. It feels like it is them against the world in almost all cases. In some ways, that’s a sign of rebelliousness. It has made it easy for teenagers to identify with vampires more, even if they are somewhat scary creatures.

Count Dracula lived in a dark, mysterious, and remote castle somewhere in Transilvania – or at least, that’s how the story goes. Vampires thrive in darkness under the moon, and they are vulnerable to light. In this sense, they’re similar to bats.

As such, they try all they can not be exposed by the sunlight. They do their best work when it’s dark and when everyone’s sleeping. Just like a nightmare, they creep up to their victim and then they strike – swiftly and effortlessly.

Vampires symbolize darkness – whether it is physical darkness or emotional darkness. They are also the dark side of our characters. As such, they represent the negative and “dark” emotions of our mind and our character.

Vlad the Impaler, which is the original Dracula, was one of the most negative personalities in history. He treated his vassals badly and tortured his enemies with cruel methods. Everyone feared him, which is why he became a dreaded character, but also someone who nobody wanted to be allied to.

He is often seen as a negative character – just like vampires are. They have become synonyms for unhappiness, struggle, and negativity, as well as disappointment. And because they spread their curse, they are also synonymous with spreading the negativity between people.

The Meaning of Vampires in Dreams

So you might have recently dreamt about vampires, but you’re not sure what that means. Don’t worry; it’s not all doom and gloom. In some dreams and scenarios, dreaming of vampires can actually be good for you.

When we think about vampires, we usually connect them to negative symbolisms. They are these scary and dreadful characters that can cause us to convert to vampires ourselves. In some cases, they even represent death. The symbolism of vampires usually covers symbols of negativity, and they even have some historical context, too (think Vlad the Impaler).

Dreaming about vampires can be a scary proposition, although it’s not every dream that’s negative. In some cases, it might even bring good things to your life!