Purple is a symbol of:

Purple is a relatively rare and powerful color. Ever since the Middle Ages, it has been the color of the aristocracy. It combines the fiery of the red color and the royalty of the blue color, which is the perfect combination for displaying a level of luxury that the upper classes wanted. It’s even a color that denotes power. 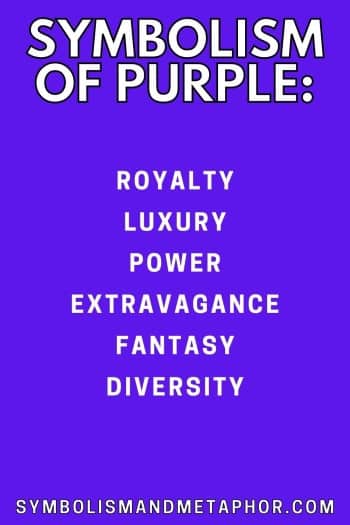 It’s also a color of creativity and fantasy and thinking outside the box. No wonder it’s the favorite color for so many artists and musicians. In this sense, there’s even a psychic and spiritual element to the purple color.

On the other hand, purple also has some negative connotations. It represents extravagance, arrogance, immaturity, and even corruption.

It’s such a fascinating color that it’s interesting to explore the different meanings of purple. In this article, we’ll discuss the symbolism of purple – both its positive and negative meanings.

Contents hide
The Positive Symbolism of Purple
1. Royalty
2. Luxury
3. Power
4. Fantasy
5. Spirituality
6. Playfulness and Youth
7. Diversity and Love
The Negative Meanings of Purple
8. Extravagance and Arrogance
9. Mourning
10. Immaturity
11. Impracticality
The Spirituality of Purple
The Meaning of Purple in Dreams
Conclusion

The Positive Symbolism of Purple

For many centuries, the purple color has been one of the more notable colors for royal families. It’s partly connected to the meaning of the purple color – because it combines red (passion) and blue (royalty – see also: blue orchids), it creates the perfect combination that represents royalty.

For quite some time, purple was also rare and inaccessible to the common folk. It was outrageously expensive, which only made it possible for rulers to have it. Even during Rome and Ancient Egypt, only rulers were able to afford purple clothing.

During Elizabeth I’s reign, the purple color was reserved for the royal family alone by law. The so-called Sumptuary Laws forbid anyone that’s not a part of the royal family to wear purple clothing.

Purple has long been a luxurious color. It was rare to see a “commoner” wearing purple clothes during the Middle Ages and in Ancient times. Since the end of the 19th century with Industrialization, purple has come to play a bigger part in everyday lives. But before that, it was only accessible for the higher echelons of society who could afford to buy purple dyes.

The purple dyes were present long ago. Some historical sources argue it was present ever since Ancient Egypt, although it’s not clear how the dye was produced. Only emperors wore purple clothing, though.

The purple color is closely connected with power. Because it combines the strong character of the red color and the wisdom and the nobility of the blue color, it’s a powerful combination. It also stands out from other colors.

And because it combines blue and red, it manages to convey a feeling of independence and strength.

Because purple is such an unusual color, it carries a degree of mystery and fantasy. It’s a color of dreams and cartoons, and it’s also a favorite with kids. There’s a playful and mysterious nature about purple which makes it a fantastical color.

Artists, poets, musicians, and creative minds have always been inspired by the purple color, and it’s partly because of this very reason. 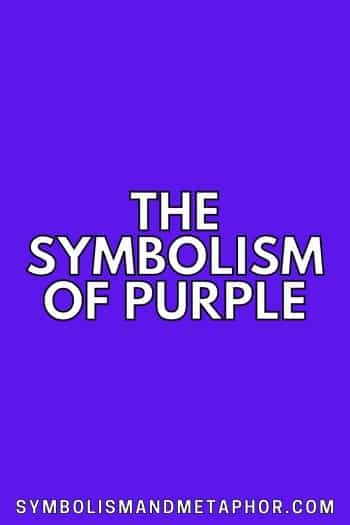 Purple is a highly spiritual color. It represents the harmony of our body and mind, which is partly connected to the fact that this color combines red and blue. It’s also a color of meditation and spiritual peace.

Because of this spiritual nature of purple, it is very often present in Churches. It’s a slightly abstract color that represents a route away from reality.

It’s also a cheerful and playful color. Because of this, purple is commonly seen in cartoons and it’s often the favorite color of children, especially girls, as well as teenagers. Its idealistic nature inspires young people who use it as their favorite color.

Several same-sex rights movements use the purple color to display their fight against oppression and judgment. In other cases, purple is a part of the spectrum of colors used to portray the pride flag. It’s a warm color that denotes passion in love.

The Negative Meanings of Purple

Purple does have some negative connotations, especially where there is too much of this color present. Here are the negative meanings of purple.

Because purple is the color of luxury, some people have abused it to express their status within society. Alongside other royal ornaments like mirrors, only rich people were able to afford purple colors centuries ago. Some overdid it, which led other people to hate them for their arrogance.

Royal families use purple to display their splendor and tell the world they are rich. They would use the colors in their carpets and even use purple gems in their crowns. In some cases, purple was even forbidden to be worn by non-royal members, which only goes to show why it was long dubbed to be the color of arrogance.

Certain shades of purple, especially the darker variations, have a very mellow nature. As such, it has established itself as the color of mourning. If there’s a lot of blue present in the purple, it has a very depressive effect on one’s mind.

For people in depressed states, purple can worsen their depression and make their condition even worse. That has been psychologically shown many times.

Because of the youthful and playful nature of purple, it’s often been deemed as the color of immaturity, too. The term purple speech represents this completely. It’s a term that’s used to describe profanity and bad language, which is often a sign of immaturity.

When purple is used professionally, it’s slightly confusing and it feels out of place. It’s also a rebellious color, which is used by young people to display their disdain towards the world and their inability to fit inside it.

The Spirituality of Purple

In spirituality, purple represents the highest vibrating color. This makes it connected with the crown chakra. This crown chakra is one of the main chakras closely tied with the thousand-petaled lotus.

Because these petals of the lotus are reaching towards the sky, the crown chakra, or the seventh chakra, is thought to be the connection between the human and divinity. It’s the chakra that opens outwards, towards infinity and back. It opens up possibilities in terms of visions, creation, and eventual manifestation.

The Meaning of Purple in Dreams

Perhaps you’ve dreamt about the purple color in your dreams, so now you’re wondering what exactly it means.

Purple is a highly symbolic color. It can have so many different meanings, too. It has several positive meanings – it can be the color of luxury and royalty, as well as of power, playfulness, and youth. 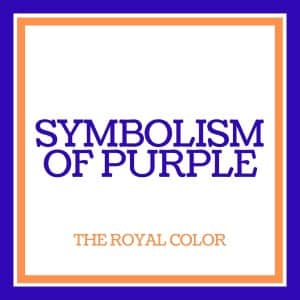 It does have negative meanings, too. If used in abundance, purple can denote that someone is arrogant, while it is also a color of mourning and immaturity. The symbolism of purple is present in our daily life, so observe it and think about how it represents the things we’ve talked about in this article.