Orchids are one of the oldest types of flowers in the world. They got their name in times of Ancient Greece when the Greek botanist, Theophrastos, named these flowers “Orkhis”. He named them that way because they reminded him of the male anatomy. 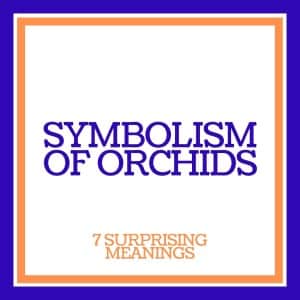 This fact alone brought some powerful symbolistic meanings with it. Orchids were the ultimate display of fertility and virility and even sexuality. Today, those symbolisms remain but there are also other meanings for orchids. They represent elegance, power, strength, and luxury.

It’s also interesting to observe the symbolism of orchids through its color variations. White orchids represent innocence, while blue orchids are a symbol of luxury and royalty.

The Symbolism of Orchids

Here are some of the main meanings of orchids as we know them today and from the past.

Orchids are elegant flowers. We buy them for large celebrations – sometimes even weddings. When we place them in our homes, they exude elegance.

When you add orchids to your dinner table, it transforms it from being a boring dinner table to an exciting and elegant one. They’re subtle and slightly exotic, although they can add some vibrance to the overall design, especially when we use different color variations of orchids.

For centuries, they’ve been the go-to flowers for creating elegant and vibrant arrangements. Sometimes, they were only accessible by royalty but today, they remain one of the most popular types of flowers for arrangements.

These flowers are also symbols of fertility – especially male fertility. One of the most famous botanists from Ancient Greece, Theophrastos, called these flowers “orchis”.

This is an interesting piece of history because the word “orchis” represents the male anatomy – more specifically, referring to the male breeding organs. The ancient botanist was apparently alerted to the shape of the root of orchids, which reminded the male anatomy.

Ever since, orchids have been a symbol of fertility – male fertility, to be more precise. Ancient Greek women gave their men the plant’s bulbs to eat, which was supposed to improve the fertility for men.

These flowers were established as the flowers of love in the Victorian era, although there is evidence they were that well before that. However, it became especially prominent in the Victorian era. In that time, men preferred to show their feelings with items rather than words, so they gifted their chosen women flowers. And orchids were one of them.

You’ll notice that love is also a symbol in jasmine symbolism and the symbolism of lilies.

In the Medieval era, it was incredibly hard to come by orchids, especially for the common folk. That’s why royal families had their own gardens of flowers. They were usually full of orchids because they were inaccessible for the rest of the population.

Other items exclusive to royalty included mirrors, crowns, and even the color purple.

Orchids were, to some extent, a display of one’s status. This trend continued in the Victorian era, although the symbolism was shifting towards love. Today, there still remains an element of luxury to orchids even though they are already widely accessible.

In Japan and even for the Aztecs, orchids were symbols of bravery and strength. If a Japanese warrior came across an orchid, they were rewarded for their bravery. Aztecs, on the other hand, drank concoctions from orchids that were believed to make them stronger.

Orchids are undoubtedly charming, especially if they’re meant as a gift to someone special in your life. There’s no doubt they would charm anyone who receives these flowers – maybe because of the combination of colors they have sometimes.

Or perhaps it’s the look itself that’s charming. When they’re placed on display in one of your rooms, they’ll light up the place and instantly liven it up.

Orchids have long been deemed as slightly unusual and different, wherever they might have been. They also have a reputation for being hard to grow and raise, which only made them harder for the common folk to have them.

Nowadays, they can be found in almost any area in the world, except for Antarctica. But a few centuries ago, they were perceived as these exotic plants that weren’t suitable just for any type of climate.

For example, in Victorian times, orchids were very rare so they had a higher perceived value. So if they were presented as a gift to another person, it was meant to be a very special gift for a very special person.

The Meaning of Orchids and their Colors

The symbolism of orchids can vary based on the colors they come in. White orchids are symbolic of peace, while blue orchids represent royalty.

These qualities are partly connected to the colors themselves, but some of them are also due to orchids themselves. So let’s take a look at the different colors of orchids and their meanings.

The color white itself is symbolic of peace, innocence, and purity. And when we combine them with orchids, they become symbols of the above-mentioned qualities. At the same time, white orchids are perhaps the most elegant types of orchids, so they represent elegance to an extent, as well.

Compared to white orchids, yellow orchids take on completely different meanings. They symbolize friendships, but also joy and happiness. As such, they are perhaps the best gift that we can give to friends to celebrate our friendship.

Purple orchids are perhaps the most common type of orchids. As such, they represent royalty and admiration. They also represent fertility, which was visible all the way from Ancient Greece. They can also be a symbol of respect.

Orange orchids command respect and pride. They are also bold flowers that even though they are slightly uncommon, they still make a great gift for someone we hold in great esteem.

The Symbolism of Orchids in Different Cultures

Orchids can represent very different things, depending on the culture they find themselves in. In China and Ancient Greece, they represent fertility and virility – although different types of fertility. But in Victorian culture, the meaning of orchids changed completely.

The Greeks were one of the first cultures to successfully start to breed and grow these plants. Before, they were wild plants that were occasionally found in the wild. Since then, these plants have been exported to most parts of the world.

Orchids soon became the intrigue for local florists who wanted to examine this new and exotic plant that came to their lands. One of them was Theophrastus, who named them orchis because of their resemblance to male testicles (or rather, the roots’ appearance resembled them).

Because of that, orchids became one of the biggest symbols of fertility and virility in Ancient Greece – especially male fertility. Women started making concoctions for their lovers so that they would become more fertile and in the hope that they would be able to have babies.

While this quality of orchids to improve fertility is questionable, there’s no denying that orchids still, to this day, represent fertility and virility.

Similarly, orchids carried a meaning of fertility in the Chinese culture, and it was for similar reasons.

However, the Chinese used the orchids to make all sorts of concoctions. They believed they had special healing abilities that made them the go-to flowers when they needed to create a healing elixir or potion.

Specifically, orchids were used for cough and lung diseases. They were believed to have certain ingredients that would cure one’s lung problems. Maybe there is something to this presumption, too.

During the Victorian Era

During the Victorian era, orchids moved from being symbols of fertility to being symbols of exoticism and luxury. In fact, many Victorians even tried to find orchids in the wild, and so started the “orchid madness” during these years.

They were valuable assets for the Victorians, so only the upper classes afforded to buy them. The nourishment methods for flowers were still somewhat undeveloped, although they massively improved during this era.

Because of their value, orchids became a gift of great importance for Victorians. Men that could afford to buy them gave them to their lovers as a show of affection, but also of status.

Orchids are beautiful flowers, but they have a rich and interesting history full of symbolism. The symbolism of these flowers was visible ever since Ancient Greece when it established itself as the flower of fertility.

In the Victorian era, the symbolism of orchids shifted – they became the flowers of luxury and of the upper classes. They were very expensive, so many people started looking for them in the wild and even illegally selling them.

Today, orchids are a part of our everyday life – we see them in almost every florist shop, and they are widely accessible to use. However, the symbols are bound to stay forever.