The lily flower is one of the most symbolic flowers in the world. Their remarkable shape and colors have transformed them into a powerful symbol. It’s also a symbol that has been present in various historical settings, including Greek mythology, Chinese history, and the history of Egypt and Rome. 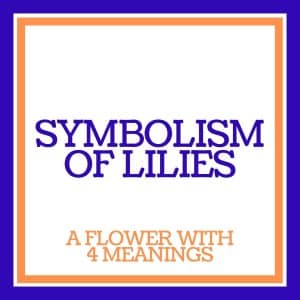 Remarkably, lilies also sometimes symbolize death and they represent the event of one’s soul passing away from the body. That’s why lilies are sometimes present in funerals.

This budding flower is a highly symbolic one, so we simply just need to take a look at some remarkable symbolisms it carries and how its colors represent different things.

Let’s first take a look at what lilies represent as symbols alone, and then we’ll dive deeper at what some different lily colors represent.

Lilies are a very feminine figure. In Ancient Greece, they were connected to the feminine qualities of a human being.

In Greek mythology, lilies were believed to have sprouted from the milk of Hera, who was the queen of gods. It’s easy to see why it took on this feminine role, too. As they were closely connected to Hera, they were believed to be the feminine goddess among flowers.

Additionally, their appearance is very feminine, too. The pink flower is especially considered as a highly feminine one, while the white one is also sometimes connected to this symbolism.

In Christianity, lilies are often present as a symbol of purity. This goes especially for white lilies, which are also sometimes known as the Madonna lily, depicting the Virgin Mary herself.

As such, they are often portrayed as a symbol of purity, and as a symbol of virginity. The lilies are also closely tied to the Virgin Mary’s role as the Queen of the Angles, proving her purity and majesty above everything pure.

Because of that, lilies are often present at weddings. Christian wedding churches are garmented with beautiful and sprouting white lilies, protecting the married couple from sin and engaging their loyalty to Virgin Mary.

When we think of pink lilies, we often connect them with love and romantic settings. Courtiers in the Middle Ages presented pink lilies to their chosen ladies. It was the ultimate display of love and affection, and it still is to some degree today, too.

This symbolism came through especially during the Victorian era when the Victorians tried to give meaning to every single flower in existence. Lilies, especially pink ones, were a sign of affection and love towards the receiver.

Even the Romans connected lilies to love. However, they mainly focused on the scent of the flower instead of its appearance, which was often hailed to be highly pleasurable and romantic. All these historical references indicate that lilies were, and still are, a symbol of love and romance.

On the other end of the scale, we also have lilies as a symbol of grief and death. Sometimes, it’s enough to portray our feelings with flowers alone, and Victorians knew how to do that perfectly. That was the first era where lilies started being the symbol of death.

They were often used at funerals. But it’s not just a random symbolism. Lilies have this strong and pleasant smell, which is believed to be the soul of a passed one going away from the body and entering the realm of the immortal.

The Symbolism of Lilies and Their Colors

As we’ve already mentioned, lilies are seen in different kinds of colors, and each color has a different meaning.

White lilies are commonly seen in funerals, but also at weddings, which is a bit of a contradiction, but it just goes to show their highly symbolic status.

That’s because there’s an element of purity about them, and they have sometimes been connected to heaven. Both symbols are very well suited for both types of ceremonies, too.

For funerals, lilies depict a level of grief but also a hope that the person’s soul is traveling to heaven. They are ought to be this “guiding” symbol that would transfer the loved one’s soul to heaven.

On the other hand, lilies are also used for weddings, and they are closely tied to purity and modesty. They depict a strong connection between the loved ones and a strong but pure bond that is to last forever.

While white lilies carry strong and burdensome symbols with them, yellow lilies are much more lighthearted in nature.

They are supposed to evoke feelings of joy and happiness, which is due to the flower’s vibrant and youthful color. They ought to bring a smile to one’s face because they are the true depiction of the sun.

Yellow lilies are sometimes used to show a level of affection towards a person we care deeply about, but not in a romantic way.

Orange lilies are similar to yellow lilies, although there’s a slightly different connotation to them. They are also positive symbols, although they depict warmth and energy instead of pure joy.

If we grant someone a bouquet of orange lilies, it means we’re very grateful to them for something they’ve done for us. Sometimes though, orange lilies are seen in funerals, especially if it’s for a person who had very warm energy about them, and a sense of positivity.

If you’re looking to display your love for someone, then you’ll do well to give them pink lilies. They are the symbol of love and affection towards someone and in a romantic way.

It has been so for centuries, too. Especially during the Middle Ages when some of the famous seducers used to grant their chosen ladies pink lilies, which was a display of their affection.

Purple lilies have always been associated with royalty. That’s because they are quite rare, so they have always been a symbol of the royal families around the world – most notably, the Royal Family of England.

Purple lilies are luxury flowers, as they cost slightly more because they are rare. If your recipient loves rare flowers, or if it’s a very special occasion, then purple lilies are your best bet.

Red is a passionate color, and if you’re really passionate about another person, you can show that with red lilies.

Red roses are normally used for displaying your love for your loved one, but sometimes, you can also change it with red lilies.

The Symbolism of Lilies in Literature

As they are highly symbolic flowers, lilies are quite common in literature, too. Various writers, especially poets, included lilies in their work, and they displayed different types of symbols.

In Boehme’s poems, lilies were depicted as the symbol of the new world to come, which was to be a perfect world, just like the flower itself is in many ways. As such, lilies were used as a reference for perfection in literature by Boehme.

Another notable poet to use lilies in their poems as a symbol was William Blake. He was a Romantic poet who was largely influenced by Boehme himself, although he used the lily flower slightly differently in his poem.

In his poem “The Lily”, it is the main symbol and the main recurring character. It’s portrayed as a symbol of beauty and innocence, while also comparing it to the rose, which is a thorny flower. But the lily is different – it hasn’t any thorns or imperfections, just the pure beauty, and an innocent character:

“The modest Rose puts forth a thorn,

The humble sheet a threat’ning horn:

While the Lily white shall in love delight,

Nor a thorn nor a thread stain her beauty bright.”

The lily flower is a constant presence in literature, especially during the Romantic period, where poets constantly used flowers and objects as references and symbols. Just like roses, lilies were a popular figure during this era, especially when it was used as a symbol of beauty and love.

The lily flower is a highly symbolic flower. Due to its many different colors and a seemingly perfect appearance, it has inspired many cultures and poets in the centuries past.

It’s definitely an interesting flower with several different meanings, which is why they are present in many ceremonies as well.