Grapes get their symbolism from their association with the wealthy and, of course, drunkenness. So, they will often represent decadance, debauchery, celebration, and abundance.

But when grapes go sour, we associate them with jealousy and envy. We can call people “sour grapes” if they’re envious, which is associated with the sour taste of grapes that are no longer ripe. 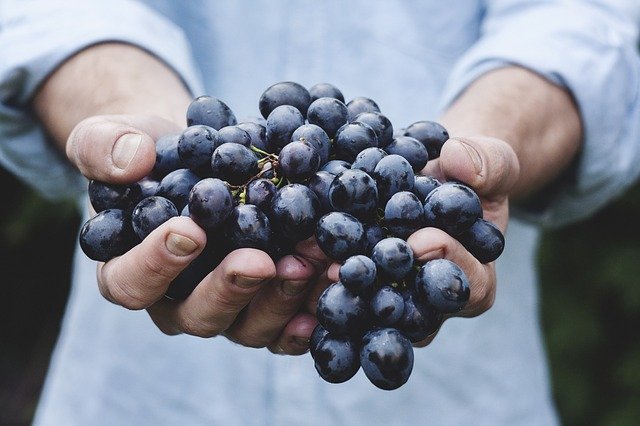 Image by Free-Photos from Pixabay

Furthermore, grapevines also symbolize gossip. And for religious people, they will often be used to represent God and the sacrifice of Jesus.

The Symbolism of Grapes

Perhaps the best place to start an exploration is with religion. Grapes carry a lot of significance in Christianity, Judaism and Catholicism. As well as other ancient religions too.

Dionysus, or Bacchus in Roman history, is a popular figure in Western culture recognised as a God of fertility. Depicted in many paintings and sculptures as the bearer of grapes and grapevines, artistic representations of him often feature busy banquets or festivals.

The grapes he carries help solidify one side of his dual nature; joy and ecstasy (the other being rage).

The role of wine (and indirectly grapes) played a big role in Ancient Greece – often seen as a gift from the Gods themselves. It’s association with abundance and artistic development is a symbol that’s still visible in modern culture, especially the canonical classics of literature.

2. The Blood of Jesus

Grapes and wine serve as a central figure of Christian religious services to help worshipers remember the sacrifice of Jesus Christ, standing as a symbol for his blood. Part of the Eucharist (also known as Holy Communion or the Lord’s Supper), wine plays a role alongside bread to pay commemoration to the Last Supper. It was in this final meal that Jesus had with his disciples, that it’s said he commanded wine be used to celebrate and remember his passing.

Interestingly, some Christians opt to use grape juice instead of alcoholic wine in the performance of this rite. 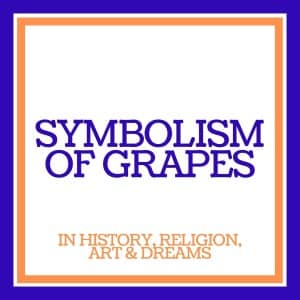 3. The Kingdom of God

Another source of iconography grapes play in the Christian faith is due to their morphology. Blooming from vines and branching out in many directions, the form of grapevines serves as an image of the Kingdom of God and the many subjects that fall under it. This also surfaces as a Biblical parable where Jesus likens farming grapes to the labors of God.

This is also another reason why grapes feature as a graphical symbol on many epitaphs and graves of Christian followers too.

The Jewish faith also centers heavily on grapes in particular forms of celebration. The Kiddush, a blessing performed during the Shabbat, is typically done over grape juice or wine before a meal. Here the drink is ritually held in an engraved silver goblet, where the person reciting takes a sip before passing it around the table.

Here wine is again used to signify joy and celebration, much like its role in ancient Greco-Roman culture.

Unlike grapes significance in other Abrahamic faiths as a product to be consumed in remembrance or celebration of religion, Islam interprets it differently in a number of dreams. Here we take a look at some of these diverse meanings.

Dreams featuring black grapes are said to represent receiving a sum of money that will soon run out. White grapes, on the other hand, symbolize returning to health from an illness. The latter is inspired by the Islamic prophet, Noah, recovering from tuberculosis through consumption of the fruit.

One way in which grapes can evoke fear, according to Muslims, is when they appear in dreams hanging from grapevines. Similarly, taking out grape seeds or crushing the pulp is said to preclude an argument with a spouse that will bring up feelings of regret. While seeing ripe grapes in dreams has a more complex meaning; veering between underlying distress and potential success.

Experiencing sweet tasting grapes, in a dream, is said to preclude receiving benefits from close friends or family members. Sour grapes, in contrast, can again point to upcoming regret. Picking up a handful or bunch of grapes is interpreted as receiving money from a woman in the near future.

Grapes are just one of the common depictions of fruit in art that date back thousands of years. Stemming from Ancient Egyptian beliefs that being entombed with artistic representations of ripe fruit would grant rewards in the afterlife, brightly colored grapes have been a staple of still-life’s ever since. Depending on their state of ripeness however, their meaning can alter.

Mature grapes in paintings, like their religious symbolism, represent youthfulness, vitality, abundance and fertility. Rotting grapes however, denote decay and disease. While also serving as a reminder for human transience in a world where we’re destined to die.

The use of wine in numerous paintings depicting celebratory scenes can also be imbued as representing drunkenness and debauchery. Mostly these works surround Bacchanalian themes, such as those seen in the works of Caravaggio, Rubens and Velazquez. There are occurrences of this symbol in more modern works too however, such as the wine bottles appearing in Edouard Manet’s “A Bar at the Folies-Bergere”.

Grapes also paint evocative pictures or serve as metaphor in literature and everyday sayings. Here we take a look at two ways the word has come into common parlance.

Playing on the bitterness that the taste of grapes is sometimes said to have, “sour grapes” is an expression that has been used in the title of both films and literature over the last century. The origins of its use stem from Aesop’s fable “The Fox and the Grapes”. In the story a fox tries to eat out of reach grapes but can’t, instead claiming their taste to be unsatisfactory rather than admit defeat.

The idiom is now used to describe being envious or jealous of other people.

2. Heard on the Grapevine

The expression “to hear on the grapevine” is a common idiom used to describe the act of learning or gossiping. The etiology of the term comes from the autobiographical writing of Booker T. Washington, where slaves used the expression to describe news being passed down from one person to another. Similar to the bush telegraph.

Marvin Gaye increased the popularity of the expression through his 1966 Motown record “I Heard It Through The Grapevine”.

The symbolism of grapes, as the aforementioned examples prove, have taken on several different meanings between varying religions and cultures across centuries. Sometimes positive, other times not, the fruit, and the plant it derives from, still has a firm root in the modern world.

Whether its symbolism will go on and evolve in tomorrow’s films, paintings, music and media, remains to be seen.