The symbolism of snakes has a long history in indigenous, spiritual and cultural practices. Throughout history, humans have had to learn how to coexist with snakes, because they are present almost anywhere in the world. But this also means that snakes can mean something entirely different in one part of the world than it would in another part of the world. 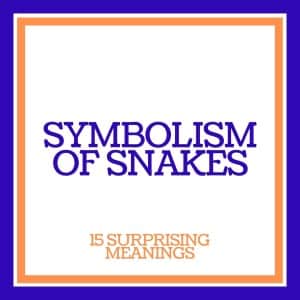 Snakes are also a very polarizing character. For example, in the Bible, snakes are the symbol of evil and deceit. In Greek Mythology, snakes are the bringers of good luck. There are many different interpretations of snakes, which also makes them interesting to look at as a symbol.

The Symbolism of Snakes

What do snakes represent to us today?

Most people are scared of snakes. It’s just something we’ve learned to have as human beings. It’s ingrained deep in our brains, which stems from our common history with snakes.

From centuries of dealing with snakes, we have learned to be cautious of snakes that are venomous to us. If they bite us, it can paralyze us and make us unable to move, and maybe even kill us if we don’t get the antidote quickly enough.

Although not every snake is venomous – in fact, most snakes aren’t – we sometimes (unfairly) see them as a symbol of danger and even death.

Because of their venomous nature, we’re scared of snakes. A lot of people are so scared of snakes that they freeze even when they see one. However, most snakes will actually run away from you unless they have no other choice.

So they’re afraid of us, too. They actually try to avoid us as much as possible, as they see us as a threat to their being. This creates a mutual feeling of fear and respect in some ways. Unfortunately, human beings have sometimes gone too far because of this fear, which caused some snake species to almost go extinct.

Snakes shed their skin through a process called sloughing. This process represents a transformational ability of snakes. It’s also highly symbolic of something that’s renewable, and it could also represent a new life cycle.

As they shed away the dead cells, they regenerate their skin and become healthier for it. Sometimes, we use this symbolism to describe a process of shedding away negative things and bringing positive things into the light.

This is perhaps an unfortunate symbolism that snakes warrant with their ability to kill someone with their venom. Sometimes, it’s undeserved and we prescribe this symbolism to every snake out there, even if they are not venomous.

Snakes are also predators, as they will prey on smaller animals, especially birds and rodents that they can catch in their territory. Perhaps it’s also this quality that makes us think about snakes as destructive animals.

But it’s also true that snakes are one of the deadliest species in the world for human beings. According to this list, they are in third place, just behind humans and mosquitos. They are estimated to kill around 60.000 in the world every year.

Because people are so scared of snakes, these animals have become so feared that many cultures and people view them as powerful animals. In some cultures, this has gone so far that snakes have even become worshipped.

Perhaps this feeling of power has come from the ability of snakes to kill a human being with their venom. They are highly revered animals that in some cases, have become one of the biggest sources of fear for locals.

Snakes are believed to be one of the oldest creatures in the world. Some estimations tell us that snakes have even been around for 100 million years, which is astonishing. This shows the ability that snakes have to survive, too.

Sometimes, when we think of something very old, we tend to say that it’s “as old as snakes”.

Snakes are highly skilled in being sneaky, so they are able to catch their prey. They have this ability to merge with their surroundings and go unnoticed. So if you have ever noticed or come across a snake, it might have caught you completely off-guard.

Because of this quality, there is a term for deceitful marketing that we call “snake oil”. Initially, it was used in medicine for medications that have no real benefits when you take them. Later, this has spread widely and is today used in marketing and in life, too.

The Symbolism of Snakes in Different Cultures

Because snakes are present in many areas in the world, different cultures have learned how to co-exist with snakes. This has also led to different interpretations of snakes throughout history. Let’s take a look at some of the more interesting ones.

Serpents are ancient creatures and have been around during the times of Ancient Greece. Snakes are a common feature of Greek Mythology, and they take on two main meanings in Greek Mythology: good luck and evil.

Snakes were thought to be the bringers of good luck for the Greeks. This was especially common when they encountered snakes in the wild, which was thought to have brought them good luck.

On the other hand, snakes were also a symbol of evil. One of the main symbols of evil in Greek Mythology was medusa, which was this evil creature with snakes sticking out of her head.

Many Native American tribes had a ritual called the “Ritual of Snakes”. They performed this ritual in order to protect their lands and hills, but also to protect themselves when they went away.

So there was an element of guardianship when it comes to snakes and Native Americans. Some tribes even had snakes as their emblem. In other cases, they connected serpents as symbols of life and rebirth because of their shedding ability.

Interestingly, Native Americans also had an interpretation for when they dreamt about killing a snake in their dreams. To them, it simply meant they had an enemy and they killed their enemy in their dreams, which was to happen in their lives, too.

It’s interesting to observe the different cultural meanings of snakes all around the world. For example, in India, snakes are worshipped by the locals during the month of Shravan. When this happens, they feed milk to snakes and worship them.

In Japan, they connect the snake to their life-giving ability and fertility. Also, they connected them to rice fields, where they usually found them in nature.

For the Chinese, the snake represents an evil quality. Because of their cunning nature, they are often a feared animal that the Chinese don’t like to have around their home.

In Christianity, too, the snake is a symbol of evil. In the Bible, snakes are meant to be creatures created by demons, and their purpose is to lead the world astray. They are also depicted as cunning animals that tempt people and are also symbols of temptation in some ways.

Interestingly, snakes are also symbols of healing in the Bible. Moses saves the children of Israel by killing a snake and mounting it to a pole. And when someone who has been bitten by a snake looks at the snake, they were instantly healed, thus creating the famous Caduceus symbolism.

In the Celtic culture, snakes have two different meanings: pests and treasures.

Although there were no snakes in Ireland, they were usually present in Celtic literature when they spoke about treasures. Also, they were sometimes present as pests in literature.

The Symbolism of Snakes in Medicine

You’ve probably already seen the famous Caduceus sign, which is the symbol of medicine today. It’s a snake that’s wrapped around a pole with wings on the top of the pole, which is an occasional symbol.

It’s a symbol of health and medicine today, and it’s widely present in different medicinal establishments and companies.

Even back in Greek Mythology, serpents were a symbol of health and medicine, which has kept up until today.

The Meaning of Snakes in Dreams

Have you recently dreamt about snakes? Here’s what your dreams could mean.

For other symbolism of creepy crawlies, check out our articles on centipedes and spider symbolism.