Moths are interesting animals. They are most active at night when it’s dark, but they still tend to gravitate to where the light is. This is a slightly contradictory behavior, but it has meaning behind it. 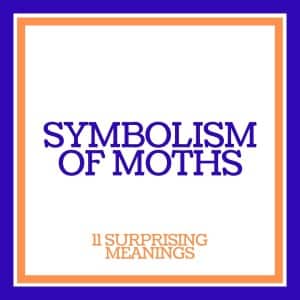 As moths are always drawn to light, they represent a positive approach to life, and they always look on the bright side of it. Moths are also very determined creatures. They’ll do whatever they can to get to this light, no matter what’s in their way. But sometimes, they follow this light blindly which might lead to their untimely demise.

Have you recently seen a lot of moths around you in your life? Or perhaps you’ve dreamt about them and now you want to know what they represent. In any case, we’ll give you all the answers when it comes to the symbolism of moths here (If you’re looking for luna moths specifically, see our article on luna moth symbolism).

> This article is from our series on insect symbolism

Moths as Symbols – What Do They Represent?

Even if the path to the source of light might be a dangerous one, moths are still determined to get there in the end, despite the adversities they are likely to face along the way.

Because moths like to gravitate towards light, they are often seen as positive animals. It indicates that we should always try to focus on positive things in our lives, which is represented by the light the moth follows.

Moths teach us to remain positive and to always seek light, even if there seems to be none. It’s also important to stay determined on your way.

This attraction to light can also be a source of vulnerability for moths. They seem to be overly fixated on the lights around them. Some say they are automatically drawn to lights as they are genetically conditioned to do so. They use “transverse orientation” to find lights.

But this is not always good for them. When they find a light source, they might try to find it at all costs. This leaves them vulnerable to potential predators; sometimes, they face an untimely end when humans decide to kill them.

Moths will find themselves in all kinds of environments, especially when they search for light. But at the same time, they will need to adapt to these new areas. They try to hide and blend with the environment as they rest when the sun comes up.

Sometimes, they manage to do that. Other times, they fail to do so miserably, but it’s not because of their lack of trying.

Moths are subtle animals, especially when it comes to breeding. This trait is especially connected with the female moth. They will attract male moths with feromones, so they don’t need to be overly aggressive to achieve their goal.

This tendency to play it subtle rubs off on their mating behavior. They have a very peaceful nature about them, too. We won’t hear them that often, although we might sometimes notice the fluttering of their wings as they fly by.

6. Darkness and Other Worldliness

There’s an element of darkness to moths, too. Even if they look beautiful and they have a unique appearance, they are sometimes considered as the symbol of death.

For example, in Irish folklore, it means that an animal is doomed to die when a moth lands on it. Or, in some books where moths are constantly displayed as the symbol of death.

In some other cases, moths are the example of divinity and the afterlife. Because they go through metamorphosis, they are sometimes associated with something divine. They have an other-worldly feeling about them.

Moths move in a very special way. Their movement patterns are not defines; rather, their flight path is all over the place. It’s almost celestial.

This is why moths are sometimes portrayed as symbols of attraction. And because they are “seduced” by light, they were sometimes associated with attraction in some Aztec communities, too.

The Symbolism of Moths as Spirit Animals

Moths have something very spiritual about them. Here’s what you need to know if you have moths as your spirit animals.

The Symbolism of Moths in Dreams

So, what does it mean if you dream about moths? Here are some potential explanations of different scenarios.

If you see a moth in your dreams…

Normally, moths symbolize that you have a fragile state of mind if they appear in your dreams. It’s either you’re not paying enough attention to things, or you are at a danger of becoming too vulnerable, or you’re annoyed by something – or rather, someone. It’s better to tread with caution if you do notice this in your dreams.

The Symbolism of Moths in Literature

Moths often appear in literature, too. In almost every case, they symbolize death.

As we’ve already said, moths have something other-worldly about them. In many cultures, past and present, moths represented darkness and death. In Irish folklore, when a moth lands on an animal, this animal is doomed to die.

A good example of this is the Killer Moth character from the DC Universe. It’s a dangerous supervillain in DC Comics fighting Batman, and it’s known for its moth-like mask. This just goes to show how moths are sometimes represented as a symbol of death in popular culture, too.

Moths are highly spiritual and emblematic animals. They represent determination and positivity, but can also be interpreted as symbols of darkness and death. In dreams, they symbolize that you might have a fragile state of mind.

If you have a moth as your spirit animal, then you’re a determined and vigilant person with a positive personality and great attention to detail.