Rainbows are natural occurrences that display a spectrum of light in a multicolored form. These spectrums of light often appear after heavy rainfall or mist and are the result of sunlight being reflected from these water droplets.

Many will associate rainbows with art as it’s something often used early in life when learning to draw, paint, or color and rainbows are also an excellent example that is used to teach children about different colors. 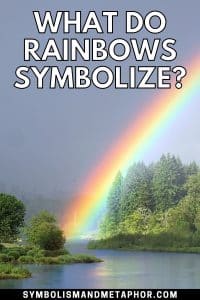 Rainbows do, however, have more spiritual and religious meanings and appear as symbols in a number of mythologies (Celtic, Greek, and Norse), religions (Christianity, Buddhism), and also cultures (Native American, Japanese, and Chinese).

Many people relate to rainbows differently and see a different meaning or symbolization based on their own beliefs and experiences. In this article, we cover the symbolism of rainbows and the unique and surprising meanings that are attached to them.

> This article is form our series on weather symbolism

What Do Rainbows Symbolize?

The rainbow is most commonly known as a symbol of hope. Rainbows often appear after a thunderstorm or when everything is seemingly at its darkest to then spread light and ultimately, hope.

We will cover a few different symbols of the rainbow, however, most have some semblance of hope tied into them. Whether it be for luck, a better future, or even a better afterlife, hope is a prevalent theme throughout.

A rainbow can also symbolize promise which stems from the Bible when God flooded the earth to rid it of sin and evil.

After the flood, Noah left the arc to be greeted by a rainbow shining over the ocean. The rainbow was said to be a symbol from God to say there would be no more floods, that this was a sign of a new day, and a promise of a better future. The rainbow, therefore, acts as a symbol of God’s promise to humankind.

The rainbow is also a symbol used in film or literature to signify the promise of better times ahead and is used for dramatic effect towards the end of these fictional plots.

The emergence of a rainbow is considered by many to be a sign of good luck. This often leads back to Celtic/Irish mythology whereby the appearance of a rainbow would be an indicator of treasure at the other in the form of a pot of gold.

Leprechauns were said to hide their gold at the end of a rainbow for safe keeping. Should anyone stumble upon this gold, they would be free to take a handful and this is often why people associate rainbows with good luck or good fortune for those that see them.

Some people see a rainbow as a sign of a new beginning. This can often be associated with the biblical story of Noah’s arc mentioned earlier, however, it also has a more literal observation as rainbows are often seen after a tragedy (typically severe and destructive weather storms).

The appearance of a rainbow after a dark time in someone’s life is often said to act as a sign of a new beginning and offers hope and promise of a brighter future ahead.

In Norse mythology, a rainbow was the sign of a fallen soldier and would act as a bridge between the mortal and immortal world for which you would cross upon death in battle.

This is most common in Buddhist teaching whereby on death, your body transcends to a form known as the rainbow body or “body of light” which is a sign of your ascension towards God.

The unification of colors on a rainbow is often thought to symbolize equality. This is because the rainbow takes all of the visible colors of light and combines them into one unified symbol to demonstrate community and equality.

This symbolism has been used in recent years to represent many different movements for change. It has been a symbol of peace protests, social movements, and also pride in many political and global movements.

This has been used in modern society as a symbol of LGBTQ+ societies. They use this symbolism to demonstrate equality and community which is represented by the unification of colors on the rainbow.

Other groups use the rainbow as a symbol because it demonstrates that all the colors of the rainbow are different, yet unique in their own way and combine to create one magnificent whole. It is therefore a powerful symbol to demonstrate diversity and equality.

Rainbows in many cultures and religions are considered to be gateways, paths, or portals that connect two realms or earths. In Greek and Norse mythology, a rainbow connected two worlds and was a path that connected to the Gods.

These paths are often seen as ways to communicate or send messages and would often be associated with a specific messenger. In Greek mythology, Iris was the goddess of the rainbow and traveled it to act as the messenger of the gods.

In Norse mythology, the rainbow bridge or Bifrost is the colored arc that connects the earth realm to the realm of the Nordic God’s. This has been depicted in the popular movie franchise Thor, where Thor uses the rainbow bridge to cross between Earth and Asgard.

In Native American culture, a rainbow is seen as a bridge between the human and spiritual worlds. The Navajo tribe sees the rainbow as an initiation that leads to the spirit world for guidance.

It is seen as an initiation that is brought about by the divine Gods as opposed to the elder tribesmen and is therefore an initiation held in the highest regard.

A rainbow symbolizes peace for a number of reasons. Firstly, it represents the feeling a calmness and tranquility when looking at a rainbow. Rainbows commonly appear after a storm and for a brief moment, give the feeling of peace after the turbulent atmosphere that usually came moments earlier.

Rainbows also appear when the clouds break and the sun shines through and many interpret this to be a message and sign from the Gods that everything is ok and peaceful times can resume.

Secondly, a rainbow can symbolize peace upon death. As mentioned earlier, certain religions see a rainbow as a way to ascend towards God’s in the afterlife and rainbows appearing at funerals are thought to be signs that the soul is now at peace.

Valleys can also be a symbol of peace – see our valley symbolism article.

A single arching rainbow is the most common sight however rainbows can come in a few different forms.

A double rainbow is symbolic of a transitional life, the first arc represents the material life on earth while the second arc is representative of the spiritual life. The double arc is said to be a gateway between earth and the heavens and is of significant importance to eastern cultures.

Many believe that the sign of a double rainbow should be observed as a time for reflection and observation. It is said to be a message from the Gods and its presence is an indication that you should take time to meditate, reflect, and take meaning from its appearance and timing (which is not meant to be coincidental).

A double rainbow is also said to be a sign of good luck. As they are a rarer occurrence than a normal rainbow, people have interpreted them to bring twice the luck.

A triple rainbow is extremely rare and has only been reported to be sighted a few times in recent history. As triple rainbows are so rare, they do not carry much cultural or spiritual meaning.

A triple rainbow is however said to bring good luck not only to those that view it but also to another person.

We often discover rainbows from an early age as they are used to help us learn the primary colors. We then learn about rainbows in science classes as teenagers to learn about the different spectrums of light.

Rainbows, however, symbolize much more than just a range of colors combined to make a whole. They are symbols of hope, promise, peace, equality, luck, new beginnings, and eternal life.