Bats are symbolic of adaptability. This is because they are well adapted to nocturnal conditions. They’ve learned how to find their surroundings using echolocation. And they’ll find themselves well versed to survive in many different habitats – they live in all areas of the world, except the Arctic.

Their exceptional navigational skills also make them symbolic of the skill of navigation. However, these animals are not everyone’s cup of tea. For some people, they provide an unprecedented source of fear.

For thousands of years though, mankind has adapted to live alongside bats. Even though some cultures had negative perceptions of them, such as the Mayans and Puritans, other cultures, such as the Chinese, perceived these animals to be a symbol of happiness.

Bat symbolism is, thus, multifaceted and reliant on where it finds itself. We’ll observe all of the nuances of this symbolism in this article.

What do bats represent to us today?

Whether you like them or not, you simply can’t deny their ability to adapt to their surroundings. Their exceptional navigational skills and their ability to find food for themselves in areas where there’s not that much food are impressive. They’ll mostly feed on insects, and the majority of bat species are carnivorous.

Another fact that speaks highly in favor of bats’ adaptability is their natural habitat range. Normally, they will live in caves where the humidity is high and where they have access to water, but also where they feel safe from various predators.

However, they are not limited to caves at all. You’ll also find them outside, and on almost every continent in the world – except the Arctic. And they have exceptional skills of avoiding predators – one of such behaviors is hanging upside down when asleep.

Bats use echolocation to find their surroundings, a feature that’s found only with bats, dolphins, and some other species. They will create a “map” of their surroundings using sound and establishing how the sound reflects from surfaces.

This ability allows them to move in the dark and hunt their prey without it even realizing it. What’s even more impressive is that bats will almost never run into each other, despite the fact that the area they find themselves in is pitch black!

Unfortunately, for many people, bats represent a sense of dread and fear. Perhaps it’s mostly because of their appearance, which some people find unpleasant. Another possible reason for this is a negative depiction of bats in many movies and TV adaptations (except for Batman, of course).

Perhaps it stems from Count Dracula, who was a vampire and is almost always shown as this negative and dread-inducing figure. Or perhaps it’s the famous visual effects where bats escape a cave in order to fill one with fear – which is especially seen in cartoons.

In truth, most bat species are not harmful to human beings. But many of us have this deep fear of bats that has been encouraged by the TV – although this fear is only shared in the Western world.

Their ability to find their way intuitively makes them a symbol of intuition, too. We closely connect this ability of theirs to our own intuition, and our ability to make sense of something not very clear.

It seems as though that bats are able to find their way almost intuitively. But there is a strong mechanism behind their way of movement, and it’s not just relying on intuition.

Bats mainly live in caves and hidden areas, which is why we don’t see them that often (unless we wander into a cave). And because it’s dark in caves, we perceive them as these invisible animals – even though they’re perfectly capable of finding their way in the dark.

This ability to cloak themselves serves them well against predators, though. It allows them to hide themselves and become one with the dark, which makes them potent predators, too.

Sometimes, we also want to hide and become invisible just like bats – even though it is not possible.

We’ll touch more on dreams a bit later on, but there’s no surprise that bats are so commonly present in dreams – and in many people’s nightmares, too. Perhaps it’s because people are inherently scared of these creatures; or perhaps it’s their appearance and their ability to surprise us when they’re discovered.

That’s also partly why bats are so common in various thrillers. And perhaps you’ve already seen a depiction in a movie where someone was dreaming or in the middle of a nightmare, and a crop of bats showed up as a symbol of fear.

Bats are also quite illusive in the way they move, and they’re so silent when they move around that it’s sometimes not possible to spot them at all.

Perhaps this is a very surprising bat symbolism – normally we connect bats to death and the underworld, but in essence, these animals are mammals after all. So they live inside their mother’s womb before they’re born, which gives them a meaning of renewal and even rebirth.

But these animals are some of the most misunderstood animals in the world. They’re often demonized, which is because of their portrayal as these animals coming from the Devil himself.

But in truth, they are quite loving and loyal to their family. They’re strong communicators and very capable of making sure their close ones are able to surive comfortably.

Bats are present all over the world, which means that each and every culture has developed its own means of getting together with these animals. In some cultures, bats are demonized; in others, they have positive meanings, too.

Bats have lived together with humans for thousands of years, but one of the first cultures to acknowledge them were the Mayans. They even had a god named Camazote, who was a bat god.

However, this god was meant to have bad consequences for those who did not go by the rules. The main meaning of this god was that he was meant to “test” human souls with a big sword. Make of that what you will, but it sure sounds somewhat negative, doesn’t it?

In Christianity, bats are also a very negative symbol. In the Bible, these animals are meant to be the messengers of Satan himself. It’s fair to say that Christians are and were not fond of bats, and for many reasons.

First, these animals are mostly found at night. And during the night is when strange things happen, according to the Bible. But some species of bats are even harmful to humans, which lead them to become even more demonized in the Bible.

The Chinese bat symbolism carries a very interesting meaning. In the Chinese culture, bats are considered to be a symbol of happines, and they even had a positive meaning for humans.

And that’s perhaps why the Chinese like to eat bats – because they have a very powerful symbolic meaning in their culture. Not only are they a symbol of happiness, but they are also thought to promote longevity.

For Native Americans, bats carry two important symbolic meanings: diligence and wisdom. These two meanings are perhaps a bit surprising, but perhaps not so much when we consider that Native American tribes liked nature and lived in synergy with their surroundings. 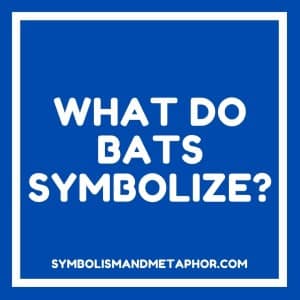 Bats are polarizing creatures. Many people are turned off by them, and are even scared by them. That’s why we often connect them to negative meanings, although that’s perhaps a bit harsh.

Bat symbolism has a lot to do with how they live. They will be able to adapt in almost any situation, and their ability to move in the dark so swiftly makes them a powerful symbol of adaptability.