The swan is a beautiful animal. It’s exciting to watch them glide gracefully across the lake, basking in the sunlight. Because of that, they’ve become a symbol of elegance and grace. And that’s also why we often link swans to the quality of beauty.

Swan symbolism stretches across our lives and also encompasses important lessons as a spirit animal. It’s meant to give you the confidence and to find beauty in yourself and others. If you’re uncomfortable with your appearance, then the swan might be the perfect spirit animal for you.

Native Americans also added some interesting meanings to swans. To them, swans were magical creatures often present in various magical and even mythical stories closely connected to faith. They also played the role of the messengers of faith

We’ll also observe the difference in meanings of the black swan and the white swan, and how they can represent polar opposite meanings.

Let’s start with swan symbolism and what they represent to us today.

One of the first things we think about when we see a swan is their elegance. It’s so beautiful to observe them when they glide across the lake with such grace. All the way through the times of the Ancient Greeks, swans played an important role in imagery.

Often, they were portrayed and present on works of art of Greek artists, especially when tied to something that represented beauty and elegance. These animals were also closely related to Apollo, the god of music, and the son of Zeus.

White swans, especially, represent the qualtiy of grace and elegance. Perhaps that’s closely tied to the meaning of the color white, but in combination, white swans create this extraordinary figure that’s symbolic of elegance.

Their elegant and graceful appearance earned the swans the right to also be connected to the quality of beauty. Aren’t these animals beautiful?

It’s also the reason why this animal often plays such a prominent role in art. Especially in European art, the swan is highly symbolic of beauty and is thus often connected to other people who are deemed beautiful.

In the UK, the swan is deemed as a royal animal. That has been the case for centuries now, and it’s why this animal is so sacred in this country. You’re not allowed to kill, hunt, or even touch the swan without permission in the UK.

Over centuries, there have been several interesting disputes around who is allowed to own swans – for a very long time, only the royal family and people with blue blood were allowed to do so.

Another interesting event connected to swans in the UK is also known as the Swan Upping. This act is done to preserve the swan population and to denote which swans are that of the Royal family, and which swans belong to other classes in the UK. It’s so interesting to see how such an unassuming animal can cause so many disputes.

Swans are loyal to their partners. They will only have one partner to breed with for their entire life, which is somewhat rare in the realm of animals. This makes the swans symbolic also of monogamy, a quality that’s somewhat dwindling in our world today, but it’s still a highly respected quality in the West.

Also, swans will very rarely leave their natural habitat – normally, they’ll spend the rest of their lives living in just one particular area. This just goes to show their loyal character and how they are perceived to be an important symbol of loyalty.

Another animal that symbolizes loyalty is the goose.

When we think about swans, we imagine them in this still and peaceful environment. It’s the sort of idyllic environment that’s often portrayed in paintings. From Michelangelo to Salvador Dali, many painters and artists throughout the centuries portrayed swans as symbols of tranquility, beauty, and even loyalty.

Especially the white swan is closely connected to the quality of peace. Their white plumage and their surroundings are what make them highly symbolic of tranquility.

Often, swans are even featured as a symbol of love, and also motherhood as an extension of that. You’ll see that the swan is a very caring animal, especially the mother – who will do anything she can to protect her children.

And as we’ve already mentioned, swans tend to stay true to their partners for the rest of their lives. They won’t switch their partners, which makes them a powerful symbol of loyalty and love. Swans are often present as symbols of love at weddings, where they are portrayed together with their partner to form eternal love.

For a very long time until the 19th century, people believed that only white swans existed. But it was only in that time that they discovered a rare breed – the black swan.

That’s why black swans have become symbols of rarity. And they’re hugely symbolic of anything rare in our culture and is also closely connected to someone who “goes against the grain” of our culture, going against the tide.

It’s quite similar to the notion of black sheep – so rare and different from the white sheep that it’s considered to be a unicum – a symbol of rarity and even rebellion, to some extent.

In this case, personal power means our courage and determination to overcome hard times. And the black swan is not afraid to go against the flow and ensure that it follows its path without conforming to the rules of society.

We sometimes connect black swans to surprising events we come across in our lives. Because these animals are so rare and we only encounter them ever so rarely, it’s a real surprise to see them in action.

So there’s certainly a level of surprise involved when we think about black swans. And this symbolism is closely tied to ancient times where people believed black swans didn’t exist. Imagine their surprise when they came across a black swan in the wild!

In European Mythology and during the 18th and 19th centuries, black swans were considered to be sent from the devil itself. That was highly typical of almost any black animal they saw, including black cats and black swans.

Back then, people were still very superstitious, which is why they chased black swans away from themselves, believing they’re the Devil’s way of luring them into his world.

The swan as a spirit animal can play an important role in your life. It teaches you to unlock your full potential and realize your internal dreams. It encourages you to awaken the powerful part of yourself, of your internal life.

Also, if you have the swan as your spirit animal, you’ll be able to accept change, and that you’ll undergo constant transformation throughout your entire life. It teaches you to not be scared of these changes and embrace them instead.

The Meaning of Swans in Dreams

Dreaming of swans might bring positive meaning to your life.

Firstly, dreaming about seeing a swan in dreams can be a positive omen for you. If you dream about one swan or of many swans, then you’re about to hit a very profitable era in your life.

If you notice a swan swimming towards you in your dreams, then you’re about to experience some happiness shortly in your life. It’s another positive meaning that you can take away from your dreams.

However, if you notice a black swan swimming towards you in your dreams, then it means that you might have a secret follower who is secretly keen on meeting you or getting to know you better. Observe how your life unfolds on a daily basis and remind yourself about this dream – who knows, it might just lead to something. 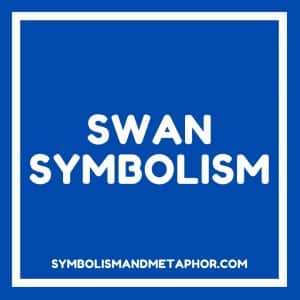 The swan is considered one of the most elegant animals in existence. For this reason, they’ve long been seen as important symbols for both the upper classes, but also to the lower classes of the society.

For the royal family in the UK, the swain is a protected animal. Only a limited selection of people can own a swan, and you’re not permitted to kill it.