As a spirit animal, the white polar bear signifies the importance of independence and the ability to trust your strength and skills to survive when the going gets tough.

Polar bears also symbolize survival and determination This is because they are considered as vulnerable as a species. However, they always like to defy odds and survive even the harshest of conditions. 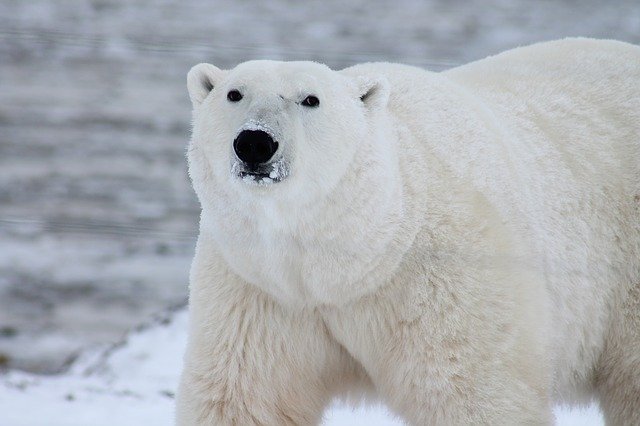 Thirdly, white polar bear symbolism teaches you to adapt to your surroundings and choose the best strategy possible to help you survive and strive. They are powerful animals that are highly successful when they strike, as they are one of the only bear species that will attack humans as their prey.

One of the first things we think of when it comes to white polar bears is their survival instinct. These animals inhabit the seas and the land of the Arctic, which they have adapted to over thousands of years of evolution.

They have two coats of fur that will keep the bear warm even when the temperatures get really low. Their body is completely adapted to move around in the ice and to swim in cold waters in order to catch their prey. Most of their diet will be carnivorous, which is understandable since there’s no other type of food in their habitat.

All of this can inspire you to use your survival instincts and adapt to your situations. The polar bear symbolism can carry an important lesson for you – that is to never give up. The unfortunate thing is climate change, which might cause them to go extinct by 2100 according to some calculations.

All of the body functions of the white polar bear have adapted and shaped in such a way that it allows the animal to survive. As already mentioned, they have thick skin but also, their hunting behaviors work in their favor.

That’s why the polar bear as a spirit animal can be so valuable when your resources are running low. That’s especially key when you’re going through a tough period in your life, just like polar bears have to constantly adapt to the weather conditions around them.

You can count on the polar bear spirit animal when you’re looking to find your inner resources, whether they are emotional or physical.

Polar bears have mastered their habitat like no other animal. They’re capable of swimming through very cold waters, which allows them to hunt down fish and other aquatic animals for food. This food is crucial for them because it provides them with fat which gives them the necessary nutrients to survive.

Polar bear symbolism allows you to harness these two elements when you need to call on them.

Polar bear symbolism can also be valuable to you if you’re looking to have a strong power of will. Without this trait, these animals would not last too long, especially considering the harshness of their surroundings.

If you choose the polar bear as your spirit animal, you can count on it to encourage you to become more determined in your life.

It can give you some valuable lessons in your everyday life, whether it’s your work life or even your personal life. We all encounter difficulties – however, it’s how we deal with them that matters, which is where this symbolism can aid you.

The white polar bear is something of a lone ranger. This is especially typical for males of this species – they’ll spend most of their time alone, except for when it comes to mating. They’re perfectly capable of surviving alone without relying on the group too much.

This captures the masculine independence to an extent, too. Their strong character and appearance as well as the instinct to roam the world alone make them a powerful image of both independence and autonomy.

As you might know, it’s best to stay away if you see a lonesome polar bear, because it’s quite likely it will attack you. And that’s even more likely when it’s alone because that’s when its survival instinct kicks in.

Another creature that symbolizes independence is the shark.

Because they have to survive on their own, polar bears have to devise their own tactics and strategies. These come useful for hunting but also to survive when it gets hard.

As such, this spirit animal is also telling you to rely on yourself and create your own strategies for when you find the world challenging you.

One of these strategies is their ability to hide their shadows when they hunt. For instance, when they hunt in the water, they’ll crawl up onto a piece of ice and conceal themselves by crouching and hiding their shadow.

They also have strategies to cope with the cold air and constant snow that’s present in their habitat. They’ll look for holes in slabs of ice to form their cave, although they’ll also dig deep holes into the snow when they are left stranded in a massive storm.

Not only do polar bears have a strength of mind, but also great physical strength. When it attacks another species, the survival of this species is highly unlikely. The same goes for humans when they’re attacked – hungry bears will actively hunt humans and use them as food.

Because of that, bears in general are a symbol of strength and power. But that’s especially typical for polar bears who need to have some extra strength to get through tough times.

As a spirit animal, the polar bear can carry some important lessons for us.

The polar bear comes to help you when you find it challenging to cope with the pressures of life. That’s the time when you’ll need the determination of the  bear to guide you through. Whether it’s your personal life or your professional life, this spirit animal can provide you some guidance in difficult moments.

You can also count on the polar bear spirit animal if you’re moving into new surroundings and are adapting to them. As a spirit animal, it teaches you to absorb the information effectively from your own life and use it in such a way that it ultimately benefits you.

Another meaning of the polar bear spirit animal is that it provides you with a much-needed feeling of respect. These animals command respect in their habitat with their strength, although you can use other mechanisms that will help you leverage the respect – which you have to earn it.

There’s another important lesson to learn from the polar bear – its unwavering strength of character. They have an aura about them, especially the male bears which are highly respected and even feared and that’s because they’re not intimidated by anything around them.

What do Polar Bears Symbolize in Dreams?

Seeing a polar bear in your dreams acts as a reminder of your physical and emotional strength when you’re feeling low. It helps you to remind you of tough times when you had to remain strong in your character in order to overcome an issue in your life.

Getting attacked by a polar bear in dreams might have different meanings. The first and the most common meaning is that you have an adversary or someone who opposes you in your life. Think of them as a rival that’s about to “attack” you soon, and you might have arguments with them.

The other possible interpretation of this dream is that you’re chased by a problem, and you’re looking for solutions for it. This is when you can use your determination to solve these problems.

If you’re running away from a polar bear, it means that you’re kicking your enemies and the bad people from your life. This is a positive dream that you can interpret as you getting one over the people causing you harm. And if you kill the bear in your dreams, it represents a recent success in your life, or it might signal that one is coming soon. 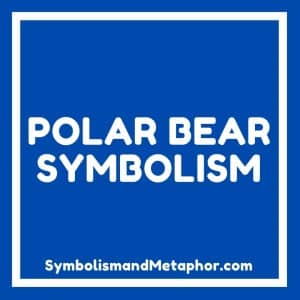 The white polar bear symbolism can play an important role if you need a sense of mental and physical strength. This will help you overcome challenges and adapt to difficult situations, which is what it represents. Other adaptable animals that might be your spirit animal include the penguin (check them out here) and otter (check them out here).