Penguin symbolism can be quite important if you’re looking to dive deep into your emotions and discover what’s beneath the surface. In fact, penguins even symbolize dreams and intuition.

Penguins have a long history but were only discovered in 1844[1]. They’re capable of surviving in the harshest conditions on Earth, including the coldest areas. So, they’ve come to symbolize adaptability, resourcefulness, and their instinct for survival.

This species is also interesting to observe from an evolutionary point of view. They’re unique in this sense and represent evolution. As spirit animals, penguins show you that there’s some order to this chaos we live in, and that you should tap deep into your emotions and your intuition more in your life.

Here’s what penguins represent to us in our society today.

In a way, penguins represent dreams as they’re capable of diving deep into the ocean, which can represent the act of sleeping deeply and discovering the “hidden” parts of our minds. Interestingly, penguins will mostly descend into water to find food. But they’re capable of holding their breaths for up to 20 minutes, which is a lot more than we can.

Another animal that symbolizes dreams is the seal.

Penguins are extremely adaptable. In order to survive, they must be able to withstand freezing temperatures. That’s why they’ve developed to be able to survive comfortably over they thousands of years of their evolutionary process.

They have very thick skins, along with high levels of fat which allow them to survive in freezing temperatures. But perhaps even more impressive is their ability to move around in icy areas. Their feet will not get stuck to the ground, even when it’s freezing cold and when they are left standing in one spot for longer.

Additionally, they’re capable of hunting for fish deep into the ocean, and find gaps in the thick ice that’s often covering the ocean. All of these traits allow them to survive comfortably in their habitat. As such, penguin symbolism encourages you to adapt to various situations in your life and just stay strong no matter what life throws at you.

Another key trait that allows them to survive is resourcefulness. For example, their black and white skins allow them to camouflage themselves while they’re swimming in the sea, while also staying hidden when they’re outside.

Penguins also don’t lose feathers, which would be bad for them, like other birds do. Instead, they go through an intense 3-week period of molting, called the “catastrophic molt”. During this period, they’re more vulnerable than usual, although this normally leaves them stronger and better equipped for harsh winters.

And they are also highly skilled hunters. They’ll use various methods to catch their prey – mostly, they’ll eat krill. One of those methods is to passively swim through larger families of krills, which makes them seem like they’re not a threat. But when they strike, they’re able to catch larger portions of krills, which is enough to sustain larger families of penguins.

According to some research, penguins appeared to have been a flying animal around 150 million years back. They were found all over the world, and they resembled other birds a bit more at that time – one of the closest comparisons is to albatrosses.

But when the continents started shifting and other species started taking up their places, penguins had to adapt to new areas to live in. They found their home in the water, so they had to learn how to swim. This creates a paradox where a penguin is considered a bird, and it’s a bird that can’t fly!

This reminds us that we should all be capable of evolving to better versions of ourselves – no matter what the conditions are in our lives. This penguin symolism can give you the courage to undergo change and not wait millions of years for it!

The penguin is an animal that’s full of contrasts. Firstly, they’re considered as a bird species but penguins can’t fly! They’re capable of swimming instead. Also, they don’t lose feathers as we’ve mentioned before, as they go through a molting period instead.

Another factor that shows this is their pelts. Penguins are normally “painted” with black and white pelts, which is highly constrasting in itself. Their colors play a particular purpose though, which is to blend in with the environment, especially as they swim deep into the ocean.

Again, this symbolism of penguins encourages you to embrace the contrasting parts of yourself and be at ease with them, because that’s just something you’re born with and you cannot eliminate. It’s better to adapt to them just as penguins do instead of fighting them, which will help you survive even the toughest of situations in life.

Penguins are extremely social animals. They’ll spend most of their time huddled together with other penguins, which plays a practical purpose of getting warmer together. But more importantly, it gives them a sense of security but also a sense of direction, as they always strive to do better for the community.

For sociable people with good social skills, penguins represent the perfect spirit animal. They encourage you to be more social and interact with others, but also to emphasize the importance of your group and teamwork instead of putting your own priorities first.

Other sea creatures that symbolize community include the orca (see here) and otter (here).

Just like penguins dive deep into the ocean, you should dive deep into your soul and contact your true, deep emotions. That’s what the penguin spirit animal encourages you to do.

Also, the penguin encourages you to look at your dreams and extract potential meanings from these dreams and transfer them to your life. Examine how the dreams you’re having can influence your life and what meaning they can give to you.

Another important lesson the penguin spirit animal can teach you is that you should be adaptable no matter your situation. Just like penguins are able to survive in harsh and wintery conditions, you should look to stay strong and adapt in your life, too.

This will give you a better chance of survival and also to strive. This is big lesson that the penguin spirit animal can give to you. These animals have adapted through millions of years of their evolution to their surroundings. But you don’t have to take a million years to do that – you can do it now, on a daily basis, and by taking small steps.

The evolution of penguins is an interesting ones. They went from flying birds to swimming birds in about 150 millions of years. Even though it’s a long course of evolution, it can teach you some lessons that you can take from the penguin spirit animal.

The most important one here is to not be afraid to change and evolve. Everyone does, after all. It’s all about how you handle that change and how you accept that you’re going to change in your life. The penguin encourages you to stop being afraid of change and embrace it instead. 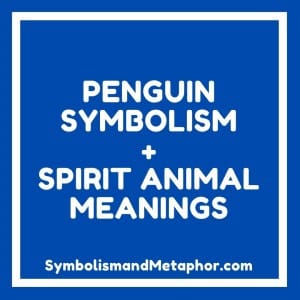 Penguins are hugely symbolic animals. They have gone through a lengthy process of evolution, which has lasted several millions of years. Although this process also allows them to survive and adapt to habitats that not many other animals would be able to survive in.

As such, the penguin symbolism includes intuition, dreams, resourcefulness, evolution, and contrast. They also bring some important lessons as spirit animals. They can show you the way in tough times, as they encourage you to be adaptable in your life. Penguins also show you to now be afraid of changes and embrace them instead.