Seals are highly imaginative and playful creatures. That’s why the seal symbolism is asking you to listen to your imagination and be creative in your life. These animals are also playful, as you’ll often find them playing with each other, which can inspire you to use your inner child in order to bring some joy to your life.

Since ancient times, seals were always considered to be powerful totem and spirit animals. They’re also symbolic of good luck, especially for some historic cultures from all over the world. Other seal meanings are closely tied to dreams, emotions, strength, protection, and movement.

What Does the Seal Symbolize?

It’s worth looking at the overall character and behavior of the seals to really understand what they can represent and what meanings you can take away from them.

Seal symbolism can help you to inspire your imagination. Seals are playful animals, and they will spend most of their time in the water, either exploring the water or spending some time with other seals in order to play with them.

This can inspire you to use your imagination and creativity when it comes to your life projects. These animals like to roam around and explore new areas, as they need to constantly challenge their minds to find new and interesting things around them.

If you’re looking for more inspiration and imagination, you can look to the seal and take away this symbolic meaning. It’s telling you that it’s okay to use your creativity, especially when it comes to solving problems.

Find joy in your life by tapping into the inner child within you. This is what seals do – almost never will they rest as they will be constantly on the move. But more importantly, they’ll need to constantly play with other seals to satisfy their playful character.

For them, life is a game and they perceive it this way even as they get older. Perhaps you’ve already seen the footage of seals playing in their natural habitat. However, most of the people have only seen seals in amusement parks where they entertain crowds of people with their playful behavior.

If you’re constantly depressed, then you can think of the seal symbolism and use it as a way to satisfy your inner child. Everyone has one – it’s just how you cater to it that makes the difference.

Another animal that symbolizes playfulness is the monkey.

Despite their bubbly character and playful nature, seals have the ability to protect themselves in their habitat. They can get quite ferocious towards potential predators and other animals that are looking to take up their place.

Sadly though, seals are becoming increasingly endangered, and they can’t defend themselves against the pollution. But when it comes to other predators, they have the ability to make themselves bigger and more intimidating, as they have sharp teeth that are bound to scare anyone that comes close.

Look to the seal spirit animal if you’re seeking strength – both physical strength and the strength of character.

Seals live in some of the harshest habitats in the world. Where they live, the temperatures often dip well below zero, and they have the ability to sustain themselves even when things get tough.

They have very thick fur and a prominent layer of fat that protects them against the cold. And when they need food, they are capable of diving deep into the water to find food for themselves. They’re even capable of holding their breaths for up to two hours, allowing them to spend great amounts of time underwater looking for food.

This adaptability can be an inspiration to you as you’re struggling to adapt to your life currently. That’s especially true if you’re now in your current living area and you’re just setting down, for example.

Because seals spend a lot of their time underwater, they also symbolize our act of dreaming. It’s like observing the tip of the iceberg: the majority of it is underwater, while we only see what’s above the water.

This can symbolize how we dream. Subconsciously, our mind wanders deep into our dreams when we’re least aware, which symbolizes the act of seals diving deep underwater. It’s a deep symbolism to observe, but one that makes sense if you like to explore your dreams often.

Another sea creature that symbolizes dreams is the penguin.

Over the last few decades, seals have become endangered firstly because of the pollution that happens, but also because humans have been actively targetting them to get their furs. If this continues, seal populations will become more and more endangered.

However, in their natural habitats, seals are perfectly capable of defending themselves. Sometimes, they’ll be targeted by other larger animals such as polar bears, for example. But they will not give in and will do everything they can to protect themselves.

Often, they’ll use the water to get away from their predators. But sometimes, they might use their ferocious character to protect themselves. Especially the males are strong protectors of their territory and will do anything he can to steer other animals clear and let them know they own their land.

They also have thick skins and a very thick layer of fat, which acts as their protection against the cold, but also against other predators.

Another animal that symbolizes protection is the crab.

On the land, seals are not the fastest movers. However, these animals will very rarely sit still and wait. Most of their time, they will spend moving around and exploring new areas. Sometimes, they might dive deep into the water for some fun.

But most of their time, they’ll go into the water to find food for themselves. They are capable of diving as deep as several hundred feet, and they can last for up to two hours underwater. They’re also very good swimmers because they have the ability to travel at relatively high speeds underwater.

In a day, a seal might travel several miles, maybe even several hundreds of miles. And when they’re home, they will constantly play with other seals and they will not stop moving that often.

Another sea creature that symbolizes movement is the jellyfish.

What does the seal spirit animal tell you?

Firstly, it’s telling you to listen to your deep emotions and tap into your inner soul to find the meaning of life. You can do this by listening to your thoughts and examining what they can mean to you. Too often today, we let our minds wander into the unknown where we can’t control it – instead, we let it control us. You can use the seal spirit animal to counter this.

Also, it encourages you to find your playful nature within you to cater to the child within you. We all have a child deep inside us somewhere, waiting for fun things to come to your life. Just like seals, you should also explore this side of yourself and not be ashamed of it – if you suppress it too much, your mental health starts suffering.

The seal spirit animal also encourages you to channel your creative energy and imagination and put it to good use. You can use it for your personal life or even professional life, depending on what you do.

Seals are normally good omens in dreams. Normally, seeing a singular seal in your dreams means that you’ll meet someone who will help you out in your life, and this especially applies to your professional life.

Killing a seal in your dreams can be a bad omen, though. It means that one of your relatives or people close to you might be in trouble soon. It also means that you’re greatly worried about the outcome of this and that you’re prepared to do everything you can to help.

Seeing a seal swim close to you in your dreams though is a sign of a close relationship in your life. Whether that’s with your friend or someone close to you, you’re looking to enter an intimate relationship with this person. You can take the meaning of this dream to encourage you to make your move if you’re interested in this person. 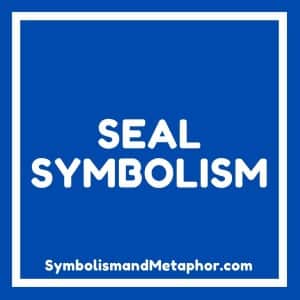 Seals are lovely animals to observe as they play. Because of that, the seal symbolism is telling you to listen to your childish nature inside and not to ignore it. This is the main meaning of the seal, but it can also be called upon when you need some imagination and you need to use some creativity in your life.