Several cultures and countries deem the seahorse a magical creature – Ancient Greeks, Asians, and even some European cultures.

Sailors, on the other hand, see the seahorse as a symbol of good luck. More importantly, the seahorse symbolism can help you discover balance in your life and transform your masculine energy in order to use it to raise your children.

And because of the way seahorses move, they’re also symbolic of peace and patience. Seahorses are also not the best swimmers – they let themselves get carried away by the flow rather than going against it. But often, they’ll also wrap their tails around an object in order to stay in one place, signifying persistence.

What does the seahorse symbolize?

For many people out there, the sole image of a seahorse represents something magical. This was true for many civilizations of the past and present. For instance, Ancient Greeks connected the seahorse to the god Poseidon, while the Romans equally connected it to Neptune.

They also thought that seahorses would act as protectors and guides for sailors. Of course, this was not always true, but it just goes to show how important this animal was in terms of intuition, and it was also a powerful symbol of the Water element.

Often, we also see seahorses depicted in various works of art and even in media representations as symbols of magic. Why that happens is not precisely clear, but it just goes to show that there’s an aura about this animal that you can harness if you use the seahorse symbolism.

This symbolic meaning is quite similar to the meaning of magic. However, the meaning of seahorses as symbols of good luck was primarily seen with sailors. Historically, sailors thought of these as bringers of good luck, especially as they headed out to rough seas or as they faced big storms.

Equally, divers also see the seahorse as a symbol of good luck. Often, this animal is present in crests and insignia of diving clubs, which acts as a sort of a guiding animal for the divers and for these clubs.

As a symbol of the Water element, the seahorse certainly has a magical quality about it that several cultures and several entities have come to respect. Use this seahorse symbolism when you’re out of luck or when you need it most.

One of the main symbolic meanings of the seahorse is that of strength and power. Despite its looks, this little animal is quite strong – and it needs to be in order to survive the harsh waters of the ocean.

They’re not particularly good swimmers, but they still manage to survive using their survival mechanism. They’ll use their tail to wrap around a stationary object in order not to get carried away by the water. In harsh waters, seahorses might die of exhaustion as they try to counter the flow of the water.

That’s also why this animal is important for sailors – it’s normally seen in peaceful and calm water conditions, which is why it signifies to sailors that they’re in an area where the weather is calm.

It’s fair to say that seahorses have a very strong patriarchal society. In a typical seahorse family, it’s the male that takes care of the toughest deeds. Seahorse males will carry the female’s eggs in their pouch instead of the female carrying them, which is typical with most other creatures in the world.

This also shows that the relationship between male and female seahorses is quite strong. These animals won’t stop breeding, even in their later stages of life. Male seahorses play the role of protecting the female but also taking care of the family.

This symbolism can be hugely important to you, especially if you’re a father. It can guide you to establish a better relationship not only with your spouse but also with your entire family. It also shows you the way towards becoming the provider of your family.

This is the opposite of the orca which symbolizes femininity.

Even though seahorses are not the best swimmers, they have their own coping mechanisms for when the water current gets too strong for them. They’re capable of wrapping themselves around an object so that they can stay in place.

But even when the water gets too strong, they never give up. Usually, they’ll fight until they die. Also, they have a thick protective shell that covers their body, so they’re not easily caught. This persistence can guide you towards better things in life.

Seahorses are carnivores, but because of their inability to swim fast, they have to adapt to the situation in order to catch their prey. Their primary source of food is brine shrimp, but even that might not be easy for them to catch.

To do that, they require a lot of patience. So the seahorse symbolism can show you more patience in your life, especially in areas that you deem important. This might be your personal life or your professional life where you need to put in more of an effort to get things done.

Another sea creature that symbolizes patience is the sea turtle.

Seahorses are very friendly animals. Naturally, they don’t have many enemies as well as predators, although they’re quite susceptible to getting caught by larger predators if they don’t hide or get carried away by the flow.

As such, they symbolize friendliness and peace, and they also show you the way when you want to improve your relationships. They’re seen as one of the most gregarious creatures in the sea, although not every other animal will accept their outgoing nature.

Another sea creature that symbolizes peace is the dolphin.

The seahorse has been around for quite a long time, so many different cultures have had different meanings about this animal.

For the Greeks, the seahorse also carried a great deal of power and strength. For them, it was known as the “hippocampos”, or hippocampus as we know it today. This translates to “horse”, but perhaps a better and more literal translation is “sea monster”.

Just like the Greeks, the Romans also connected the seahorse to their god of the sea, Neptune. Interestingly though, Romans had a different symbolic meaning for this animal than sailors of modern times do.

For them, seahorses were meant to show the way for sailors to drown rather than to show them the way. Perhaps this carries a slightly negative connotation to the symbolism of seahorses for Romans, but today, this symbolic meaning is not present anymore.

Equally, Chinese culture has a long history when it comes to seahorse symbolism. This animal, for the Chinese, was thought to have medicinal benefits, so it is commonly used in traditional Chinese medicine.

Because of this, the seahorse is endangered in the seas of China. But for them, this creature is eaten or often added to various medicines and homemade brews.

It’s thought to cure some or most health problems when it comes to impotence, wheezing, pain, and labor induction. So for the Chinese, this animal also symbolized strength, health, and even potency.

If your spirit animal is the seahorse, then you can use it in order to help yourself first before you help others. Just like the male seahorse helps other animals, you can first start to improve yourself on the inside before you can go on and help others.

Also, the seahorse spirit animal is telling you to stand your ground and stay strong no matter what happens or how harsh things get. It might be in your personal or professional life, and you should take inspiration from the seahorse which will grab onto a stationary object to counter the flow of the water.

The seahorse spirit animal is also considered as a charm of good luck, so you can rely on it if you need a bit of luck in your life. 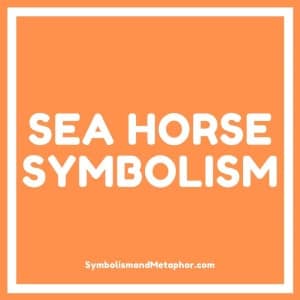 If you’re wondering what the seahorse symbolism might be, now you know – it’s symbolic of magic, good luck, persistence, masculine power, strength, and peace. These qualities lead the seahorse to become an important spirit animal when you need to count on it.

Several cultures from history and  modern cultures also recognize the seahorse as a big symbol of the Water element (one of the four elements – wind, water, earth, and fire).