Turtles are unique species that have been with us for millions of years. Due to their appearance, behavior, and overall calm demeanor, they’ve earned their status as one of the most symbolic animals on Earth.

Nowadays and throughout human history, turtles have been described as symbols of longevity and the ability to survive. And because of their wrinkly appearance, we connect them to virtues that are normally connected with the elderly, such as patience, wisdom, and groundedness.

As a spirit animal, the turtle teaches us to take things slowly and not to rush it. We should prefer slower and steady growth instead of rapid rises that come with ups and downs. Interestingly, the early Christians viewed the turtle as the symbol of opposing, evil forces (although the symbolism of turtles in Christianity is very different today!)

Here’s what the turtle symbolizes to us today.

Turtles move around slowly, and we could say that their motto is: “You come far by going slowly.” That motto is true in so many different areas of our lives, too. Patience is an important but scarce virtue nowadays. We tend to rush things and expect results overnight without necessarily waiting patiently instead.

Turtles are the exact opposite of this. Because they walk so slowly, they can cover much less ground as quicker animals – and have developed special defensive mechanisms for this fact. Ultimately, this strategy has paid off well for turtles throughout their evolution, as it will to anyone who’s willing to wait patiently instead of rushing things.

Another animal that symbolizes patience is the seahorse.

The tortoise is one of the oldest symbols on planet Earth – we could say it’s an ancient symbol of wisdom in many ways. Cultures from centuries past have used the turtle as their symbol.

Turtles are also smart animals. They have the ability to take things slowly and live an easygoing life, which is also partly why we connect them to wisdom so often. We view turtles as wise animals as they are able to meander their way through life while surviving many natural threats, despite their slow movement and inability to flee quickly.

Turtles are one of the oldest creatures on planet Earth. The earliest known turtles date all the way back to 260 million years ago. This puts them among the list of the oldest animal species in history. Although the turtles back then were quite different from what the turtles represent today. They had teeth and had no shell, and they looked slightly different.

But there’s an element of mystery to turtles, as well. Because of this anciency, many cultures throughout history have used turtles as their symbols. For example, some Native American tribes named the continent we today know as North America “The Turtle Island”, because the turtle, for them, represents the Earth itself and its history.

In addition to being one of the oldest creatures to walk the Earth, turtles are also known as animals that have one of the longest life spans out of all creatures. The average lifespan of most larger turtle species is around 80 years, while for smaller turtles, the average life expectancy is between 30-40 years.

There are several reasons for their longevity. It’s their vegetarian diet, their easygoing lifestyle, their slow growth rates, and their ability to reproduce at a fast rate. But they also have the ability to protect themselves with their shells.

The oldest known tortoise today, Jonathan, is 187 years old! Jonathan is a giant tortoise and is located in Seychelles. That means Jonathan was born during the Industrial Revolution and survived both world wars. Boy, does he have some stories to tell!

Turtles are also very fertile animals. Their breeding behavior is also quite unique. They will travel millions of miles just to hatch their eggs somewhere safely on a beach. In one single breeding patch, they can spawn anywhere from a couple of eggs to more than a hundred eggs at once.

And because they live so long, they can do so many times during their lifetime. While the spawning rates and the ages can differ from species to species, there is definitely a clear reason to see why turtles are considered as symbols of fertility.

Because turtles move slowly when they walk, they are also a symbol of groundedness. Even though they are surprisingly quick when they swim, they are quite slow when they move outside of water. However, their patience and the ability to stay firm has served them well in their development.

Because of their slow movement, turtles are often targeted by larger predators. However, they are not easy prey by any means. In fact, it’s quite the opposite. They stay determined to defend themselves, and they have the mechanism of the shell to protect them when they are hunted.

Turtles are certainly easygoing creatures. As such, they represent an easygoing lifestyle, without stressing too much about what others think, just like turtles fend off “predators” with ease.

They are also free to live almost anywhere they please. When they breed, they move hundreds of miles from where their nest is just to be able to lay their eggs. And when they are in the water, they can move freely and quickly. This freedom allows them to go about their lives in an easygoing manner. (See also: our article on water symbolism).

This is personified by squirt in Finding Nemo:

Tortoises are peaceful animals. They are the symbol of peace because they are relatively harmless animals that don’t really have any predatory behaviors. They have a vegetarian diet, so they don’t tangle themselves into fights or they don’t hunt down other animals. Instead, they live their own life and walk their own path.

Because of all of those qualities and symbolisms we’ve mentioned above, turtles are often present as spirit animals.

If you have the turtle as your spirit animal, it means you’re an easygoing person, even though you’re determined when things get tough. You have quite a strong shell when other people target you or when things are not going your way, and you’re able to overcome hard times because of this determination.

The turtle leads you to live your life in an easygoing manner, although it also teaches you to take things slowly rather than rush them.

And just like tortoises, you should learn how to walk your own path peacefully instead of limiting others along the way. Because you have the determination, you should be able to overcome anything that gets in your way without involving others or without causing any harm to other people.

The turtle has been present as a totem for many centuries. Most notably, it was an important spirit animal for Native Americans, where it represented their connection to Earth. But it also had similar meanings as today, such as determination and also longevity.

What Do Dreams About Turtles Mean?

Even though a dream about turtles might seem a bit odd, some people still experience them. Especially if you haven’t seen turtles in your real life in quite some time, turtle dreams might seem somewhat unusual.

However, there is a symbolic meaning behind these dreams.

Turtles are ancient and unique animals that have been with us for millions of years. They’re easy going animals that have the determination and the ability to survive for long and to protect themselves from predators. 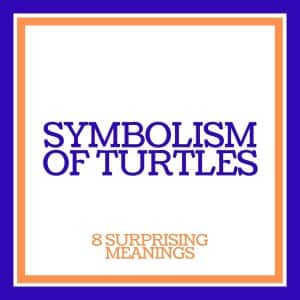 These virtues mean that turtles are commonly used as symbols for things we do in life. The symbolism of turtles can represent determination, longevity, wisdom, patience, and even fertility.