A lobster often symbolizes that you need to come out of your shell a bit more. This is especially typical of the lobster as your spirit animal. It also encourages you to have a strong shell and stay protective when things get hard, and when life comes at you hard and fast.

Lobsters are adaptable creatures. They’re able to regenerate broken or lost limbs, so they’re also seen as a symbol of regeneration. But they’re also symbolic of strength, resolution, and even abundance. Today, lobsters are considered an expensive dish; however, in the past, these animals were used as prison food.

Other meanings of lobsters include discovery, protection, transformation, and even vision.

Symbolism and Meanings of Lobsters

Based on their character and appearance, lobsters have their own symbolic meanings that bring some clarity to your life.

There’s no doubt that lobsters are one of the toughest creatures you’ll find in the sea. Even though they’re quite small in stature, these animals are incredibly tough to break down and attack, which is why they don’t get hunted that often.

They have a strong shell and they get defensive when they’re provoked. Even professional farmers and fishermen have difficulty hunting lobsters. That’s why they’re also very expensive in many restaurants today – in a big city, eating a lobster will set you back for at least $30.

And pair that to their strong and stubborn character, and you’ve got a tough package to attack if you’re a predator in the sea. You might be surprised at just how much this animal is able to survive and live through.

Another sea creature that symbolizes strength is the orca (see here).

Much like crabs, lobsters have a thick and strong shell that’s hard to break down. This shell is typical for most crustaceans, although lobsters are considered as an animal with one of the thickest shells out of all these animals.

This quality of theirs is hugely symbolic. Their shell is often used to compare a human’s qualities of protection and even resilience. Today, we often say that having a thick shell is one of the most important things we need in order to survive in the modern and competitive world.

The shell also has mighty implications for the lobster as your spirit animal. As such, it encourages you to have a strong shell and to sustain yourself even through your tough times. But also, coming out of this shell of protection can be key when you want to convey your feelings.

In the past, there were some memes about lobsters being immortal; however, this is just not true. They do have a strong regenerative nature though, as they’re able to regenerate and regrow limbs and claws. It’s an important quality that allows them to survive longer, although it doesn’t mean they can live forever.

Also, lobsters grow their entire lives. They keep constantly growing by molting (shedding their shell). They molt their entire lives, and they’ll grow more and more as they grow older. This exceptional ability is something that’s not very often seen with other animals.

Their ability to regenerate lost limbs and to grow constantly by molting is impressive. They’re thus a symbol of regeneration, providing an important symbolic meaning to everyone that needs to reset and constantly regenerate their energy as they go through their lives.

You may be surprised, but lobsters have one of the best abilities to see out of all sea animals. Normally, these animals will use other senses to go around and find their space. However, their vision is much different than what we, as human beings, have.

They have eyes at the base of their large antennas on their heads. They see through reflection and not refraction, which is how we use our eyes to see. That’s why they’re able to see things a bit differently but also many times more clearly than we do.

Perhaps it’s not the most common symbolic meaning you’d associate with lobsters, but this ability to see things differently is certainly impressive. This makes them a symbol of vision but also discovery, as they swim around the sea, constantly discovering new areas every day.

Today, lobsters are considered expensive food. You might need to spend up to $45 in a typical restaurant to get a good lobster meal. However, in the past, lobsters were only fed in prison settings.

They’re considered as a symbol of abundance because it’s a dish that not many people will have and afford on a constant basis. They’re hard to catch and hard to transport, which is why there have to be special measures in place in order for lobsters to survive the longer transportation routes.

Today, we connect the dish with lobsters to people that are well off. The dynamic started changing around 30 years ago when this dish was introduced to modern culinary menus. But it’s also a delicious meal for many that they just can’t ignore.

As we’ve already mentioned, lobsters keep on changing throughout their entire lives. If the conditions are right, American lobsters can survive up to 100 years in nature. However, the Caribbean spiny lobster will only survive for up to 20 years.

This means that these animals will undergo transformation throughout their entire lives. Lobsters will constantly adapt to their environment, and they’ll grow almost every year by molting. So American lobsters can get quite big as they reach the age of 100 – if they reach it, of course.

Also, lobsters are capable of re-growing their limbs, so they’re also a symbol of transformation. This symbolism is quite important for the lobster as your spirit animal – which we’ll talk about a bit later.

This is an interesting symbolic meaning. We normally connect lobsters to their ability to grip things with their claws, so they’ve become a symbol of gripping. Their grip can be quite strong, too.

And this act of gripping is also very important for the lobster as your spirit animal. It’s telling you to grip on the most important things in your life and to let go of things that are holding you back.

Despite their smaller stature compared to some other animals, lobsters are determined to get their way. They won’t just cave in under pressure – instead, they’ll be able to overcome attacks even from some bigger animals.

That’s why they don’t even get hunted by other predators that often. They know that lobsters are hard to swallow with their strong shells, but also lobsters will normally put up a good fight before they’re caught. This allows them to survive for long periods and even for up to 100 years if the conditions are right.

There are plenty of meanings to be found with the lobster as your spirit animal. Its strong nature and determined character are well-liked and make this animal a formidable one when it comes to spirit animals.

When you have the lobster in your mind as your spirit animal, it’s time to take a look at the deeper meanings of the lobster and how it can impact your life in a good way. 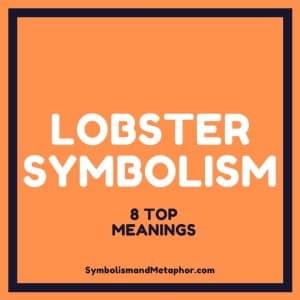 Finding inspiration in the lobster as your spirit animal is easy. The lobster symbolism is telling you to have a stronger level of protection in your life, which allows you to easily overcome any potential challenges you come across.

Lobsters are unique animals. They have strong shells, making them symbolic of resolution and protection. They’re also able to see things in a different way, and their molting behavior allows them to transform and grow their entire lives.