Water is everywhere you look – the sea, the lake, river, ocean, rain, snow, kitchen, bathroom. It’s the one thing that separates us from the rest of the universe; it’s the difference between life and death. Because of that, it’s become a venerated commodity representing a wide variety of symbolisms. 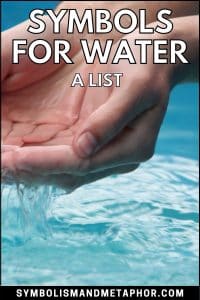 Water symbolism everywhere. It represents life and fertility, allowing generation upon generation to survive and thrive. Water also represents circulation, which is crucial for our survival and for the recreation of water. It’s also one of the four elements of life, the signs that we connect with – Earth, Air, Fire, and Water.

Because of the importance of water, it has played an important role in many cultures and the civilizations of the past and still does to this day. Water is part of many creation stories, which we’ll also take a look at in this article.

The Symbolism of Water

Water brings life. It is the driving force behind human civilization. Without water, humanity would not exist – life on Earth would not exist, for that matter. More than 70% of Earth’s surface is covered by water. For adult men, 60% of their body composition is composed of water.

What is more, water has been the main driving factor for the growth of human civilization for centuries. From irrigation to the Industrial Revolution, it’s been the key to almost every development throughout our history.

Without water, we can only survive a few days. So do plants, animals, and everything else alive and kicking. Water also separates us from the rest of the universe. It’s the main factor that determines whether a planet is viable for life or not, and whether there is any possibility of life on those planets.

It’s the defining factor that keeps us ticking, and that enables all forms of life to exist on planet Earth. Without water, there is no life.

Water enables us to grow plants and to reproduce at a relatively fast rate. Everything that we grow requires water, which in turn produces food. And when food is abundant, the conditions are perfect for humans to reproduce.

It’s the source of life that’s needed for humans, plants, and animals to grow and reproduce. A human can survive without food for up to 3 weeks, but one simply cannot survive without water for longer than a few days.

Throughout history, civilizations that had water and that knew how to use it were more prosperous and successful as a rule. Think about Egyptians, who knew exactly how to use the power of the Nile to build farms and create produce that would drive the civilization to prosper.

Or Romans, who built aqueducts in order to drive water to households, enabling each household to have a good stream of water which created prosperity and a good ground upon which the empire would grow.

During the hot summer days, there’s nothing more you would like than to dip yourself into a cool stream or lake. Or to drink some cool water that would help you get through the heat more easily.

In the winter, water is present as snow and ice. It’s this snow and ice that provides perfect conditions during the spring for plants to start growing. As it melts, the ice and snow create streams and rivers that are crucial for the ecosystem. 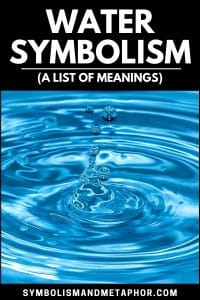 Water is a symbol of motion, and almost every time you think about it, you envision it as this moving entity. Whether it’s an ocean, sea, river, stream, or even rain, water is almost always connected to motion (see also: ocean symbolism).

And even when water is stationary, such as in lakes, it was created with the help of a moving type of water, such as rain or river.

This sort of motion was crucial for civilizations of the past and still is today. We use the water’s motion to move between continents and countries with boats and ships.

Sometimes, people used to take advantage of the river’s motion to power water mills, which would eventually lead to the creation of electricity using water’s raw moving power – which still plays an important role today.

Water is created through circulation. As rain falls, it creates streams, rivers, lakes, and seas. And then these sources of water evaporate, causing even more rain, and so the cycle continues. This cycle is crucial for the survival of us as human species, but also for the survival of everything else living on this planet.

Another way we could connect water to the symbolism of circulation is that rivers usually end up merging into seas. Small rivers flow into larger rivers, and these large rivers end up in seas or oceans, or sometimes lakes. This circulation is important for keeping these waters alive.

Ever since the Roman era, we’ve used water to clean ourselves. Nowadays, water is treated as something that’s self-intuitive, but it was not always like this. In medieval times and even up until the 18th century, clean water was only accessible for the rich and for the upper classes.

Water cleans and purifies anything that comes in contact with. We use it to clean ourselves, to clean our homes, as well as almost everything else we have in our possession.

Rain also sometimes plays this role as the purifying element. After long and hot summer days, rain is always welcome to freshen up nature and clean up what has long been dusting up.

Read Also: What Does ‘Blood is Thicker than Water’ Mean?

Water is still an unexplored entity. We still don’t know how deep we can go to reach the bottom of the deepest ocean. We don’t know what sort of creatures are lurking there, creating an element of mystery to water.

Also, there is an element of mystery to oceans. They are vast and they seem like they’re never-ending, which is mysterious to many people who want to know what’s on the other side of the ocean.

There’s also a feeling of exploration when it comes to water and sea. In the 16th and 17th centuries, many explorers took on waters – many have failed, while others have discovered new continents and new lands.

As humans, we still haven’t mastered the power of water and probably never will. The power of water is shown in the natural disasters that are caused by tsunamis and floods. In a way, that’s also the power of nature itself, although water is the main driver behind those catastrophes.

Water has long been used as a source of creating power itself. We’re now able to master this power of water and use it to create electricity, which is made using dams and in the past, water mills.

Sometimes, we’re just helpless against the power of water. For example, when ships find themselves in storms in the open sea, there’s not much to do but wait out the storm. Or, the phenomenon of the water current taking you in the direction without you knowing – also called rip currents, which are the ocean’s “silent killer”.

Read Also: What does ‘Blood is Thicker than Water’ Mean?

The Symbolism of Water in Different Cultures and Religions

Water is such an important entity that it’s always played an important role in our culture. Let’s see how different cultures perceive water.

In Christianity, water is commonly seen with two important acts that are closely tied to Jesus Christ himself:

The first one is to demonstrate the power of Jesus in the New Testament. It’s one of the miracles of Jesus where his disciples see him walk on water.

For Hinduism, water is the symbol of everything that’s alive and it is the most important substance that keeps us and everything else on this planet alive.

In Upanishads, water is also often a symbol of purity and purification, as well as wisdom.

The symbolism of water in Islam is also the symbolism of life. In the Koran, water is portrayed as the gift from God who gave water to living beings to survive and thrive on planet Earth.

For Native Americans, water was also a symbol of life. They believed that water is the main element that tied the world together and helped them as well as every other creature survive. Because of that, water is commonly present in many creation stories made by Native American tribes.

Water is everywhere. It is the main driving force of civilizations of the past and today. Without it, we wouldn’t be able to survive, let alone thrive as a species. Because of that, the main water symbolism is life. Water also represents fertility, purity, power, and even mystery. In most cultures and religions, water is also closely connected to life. 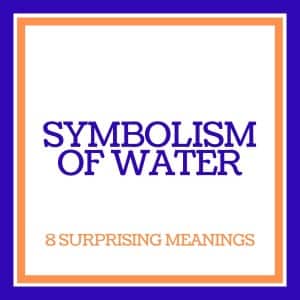