Ice can represent a lot of things in life and in dreams. The main symbolism of ice is coolness, of course, but it can also mean many other things – sometimes implicit, too.

It’s a symbol of rigidity and stillness, which we can easily connect to our current situation in life when things feel stationary. Sometimes, we connect ice to our feelings – in most cases, it represents a cold person, free of any emotions. It also symbolizes the absence of love and, in some cases, anger.

Because most icy areas in the world are unexplored, ice can symbolize an unexplored entity. Interestingly, ice is often present in dreams and is frequently employed as a symbol in literature. Read on and find out the different meanings of ice in various areas.

6 Things Ice Represents as a Symbol

What does ice symbolize in life as a symbol?

When one acts coolly in a difficult situation, we often say one’s “as cool as ice.” It means that you’re somewhat calm in your actions, and you take calculated risks in your everyday life without stirring up your emotions too much. While this is great in some areas in your life, it might not be the best approach when it comes to love.

Another way ice represents coolness is in the way we behave. When you’re cool, you’re perceived as an interesting person that’s worthy of adoration. This symbolism can also carry the saying “as cool as ice.”

In this sense, being as cool as ice means you have an element of suaveness and style to your behavior. Although this meaning will vary depending on the culture you live in and the surroundings you find yourself in – in some settings, this coolness doesn’t apply as much as in some other areas.

Ice is crystallized water, and in some ways, it’s opposite to water symbolism (which represents life and movement), while ice represents a lack of life and a lack of movement.

Because of this, ice is sometimes used to describe the current state of affairs in one’s life. This is an appropriate symbol when a person is not moving forwards in life and is instead staying still in one place and not looking forward to new things.

Perhaps you’ve already heard the song “Cold as Ice” by Foreigner. It describes how the singer is in love with this woman, but the woman is not returning this feeling back. She’s free of emotions and unwilling to show some love for the man in love. This is how the lyrics go:

“You’re as cold as ice

You’re willing to sacrifice our love

While the example is somewhat trivial, it still shows how ice can represent a lack of emotions. In most cases, this lack of emotion is visible when it comes to love, but it could also be in other areas of life. Ice represents a person that’s cold and unable to feel emotions as well as other, warmer humans.

On Earth, there are very few places where there are not many settlements, and where it’s incredibly hard for explorers to venture. This includes desolate places such as deserts, but perhaps more notably, icy areas in the world where it’s just too cold and icy to explore.

In the past, famous explorers had difficulties with ice and exploring new areas. It was one of the biggest and most dangerous obstacles a sailor could face, and many avoided it. That’s why icy areas are somewhat unexplored and, as such, represent an unexplored entity.

This “unexploredness” has been transferred to our state of mind and our being, too. The ice could represent an unexplored part of us – the part which we didn’t know existed because it’s hard to explored and hidden so deep inside of us.

Ice sometimes represents our feelings of anger towards another subject. In most cases, ice is connected to negative emotions or rather a lack of emotions. But one of the most common emotions we can attribute to ice is anger.

Ice is formed in winter and in colder parts of the year, so it’s normal to connect it to winter. When it’s cold enough, water starts forming into ice, and as such, represents winter and the colder part of the year.

The Meaning of Ice in Literature

Ice is a very common figure in literature. It’s present in some of the most famous works throughout history. That’s because it’s highly symbolic, and it possesses a very strong quality to elicit strong emotions.

For example, in one of Robert Frost’s poems, ice represents a destructive quality and the feeling of hate. He writes: “I hold with those who favor fire. But if it had to perish twice, I think I know enough of hate To know that for destruction, ice is also great.”

Nietzsche – Human, All Too Human

In his book Human, All Too Human: A Book for Free Spirit, Friedrich Nietzsche uses ice as a symbol for clarity. He says that “He who cannot put his thoughts on ice should not enter into the heat of dispute.” It’s a great example of using two opposite things to get his point across.

Similarly, Petrarca uses fire and ice to describe two very different states of his mind. He “freezes and burns” while his love is “bitter and sweet.” He’s in “ecstasy and agony” at the same time, which symbolizes his disconnection with himself. Ice represents his negative state of mind, while fire and burning represent his positive emotions.

In one of Dante’s most famous works, Inferno, which is the first part of his epic poem Divine Comedy, ice is present in one of the deepest parts of hell. It represents treachery and being unable to escape from it, which in Dante’s eyes was one of the biggest sins. Inside this ring of hell, there is a frozen lake where treacherous people are trapped. Because these people committed the sin of treachery, they are placed far away from God’s warmth and into the coldest parts of hell.

The Meaning of Ice in Dreams – 5 Meanings

What does ice represent in dreams?

7. Dreams of an Iceberg

When ice is present in your dreams just in the form of ice cubes or simply as sheets of ice, then it represents your anger towards something or someone. Perhaps you’re going through a tumultuous part of your life where you’re struggling to keep your emotions intact and stay calm. Ice could also represent other negative emotions you might be experiencing in your life, and it acts as a reminder to take things more lightly.

What if you’re skating on ice in your dreams? It means you’re disappointed with how things have developed in your love life. Perhaps you’re getting carried away by feelings of affection towards another person, only to be left disappointed in the end. If you experience this in your dreams, evaluate your current love life and how this might apply to your particular situation.

10. Slipping on Ice in Dreams

The first meaning of this is that you’re potentially facing danger in your life. Perhaps there’s a minor accident waiting to happen, which is why you should be careful when you’re walking in slippery areas, such as your bathroom.

The second meaning of this is a bit deeper. It represents your inability to control an aspect of your life, whatever it might be. You’re failing to get a grip on the situation, and you’re not able to handle yourself in order to stay in place. Perhaps it’s time to re-evaluate this situation in your life?

This dream can translate directly into your current life situation or a recent event in your life. It might depict a period in your life where you were unable to function properly, and you froze in your movement. It acts as a warning shot to take things less seriously and unwind. 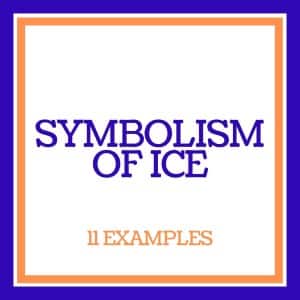 Ice is highly symbolic, and because of this, it is often present in literature but also as a symbol. Its main symbolism is coolness, although there are many other meanings connected to ice.

In literature, ice is often tied closely to emotions and has been featured in some of the most famous works. This just highlights its symbolic nature.