Symbolic meanings we connect to pelicans include wisdom, safety, humility, charity, nurturing, generosity, and even direction. As a spirit animal it brings us these traits when we are in need of them.

Pelicans have a long history in mythology and symbolism, especially in Christian symbolism and heraldic history. In Ancient Egypt it was often connected to death and the afterlife.

By contrast, pelicans are thought to be the bearers of children in Christianity. Christians always admired it for its ability to feed and care for their young, even if there was no food to be found. Sometimes, the mother would open up a wound for their children to feed on it, which became symbolic of the passion of Jesus.

Pelicans are also very social animals. They respect their community and do almost everything with the help of their family. The spirit animal emphasizes the importance of teamwork and community.

Pelican Symbolism as a Spirit Animal

Here’s what we think of when we think about the pelican symbolism.

Even though pelicans often hunt on their own, they’ll often do things in groups. That’s the only way they’re able to accomplish some things, such as traveling around and finding their bearings. Also, they love to stay in groups because they feel safer that way.

These animals have a strong social sense. They respect the societal hierarchy strongly, although they’re not afraid to sacrifice themselves when it comes to the greater good. That’s what allows them to survive for longer and it also allows the entire groups to survive together and for longer.

Pelican symbolism teaches us one important thing, and that is the importance of community and teamwork. It shows us that we should be putting our focus on collective effort rather than being individualistic all the time – at least when it matters. That’s either for work, in family settings, or for achieving a certain goal.

Other sea creatures that symbolize community include otters (here) and orcas (here).

Pelicans are not afraid to sacrifice themselves to the greater good. Often, they’ll put the importance of family and community before their personal interests.

A good example of this is called pelican vulning, which is the act where the mother injures herself in her chest in order to let out blood that can then be consumed by her babies. This behavior is important especially for Christians, as they started to connect this behavior to Jesus Christ himself.

But this is just one example of the sacrifices pelicans make for the greater good. When in groups, they will target the tasks that will benefit the group first before satisfying their own needs and concerns. This is another important spirit animal lesson that we can learn from, although only in certain situations.

Pelicans have a special pouch in their beaks they can fill with water and food. They’ll store enough food for them to survive for a day inside this pouch. That’s what makes them symbolic of safety and security.

Also, the fact that they like to travel in groups is symbolic of this. They’ll feel much safer when they are in groups rather than when they are alone. That’s why they prefer to stay safe and live with a good amount of security.

But this pouch in their beaks can also represent many other things. For example, it might be symbolic for you if you are someone who wants to take a lot of knowledge in. It represents the idea that storing something safely is a good symbolic meaning for you.

Because of the pelican’s behavior to give away its blood to its babes, we often connect them to the symbolism of generosity. They’re always ready to share their catch with their family.

This generous nature often returns back to them when they need help, too. Other pelicans are always prepared to help out a wounded colleague, for example. So this  spirit animal comes to people who are a generous person always willing to help other people that you find important in your life.

Also, pelican symbolism became an important part of the Christian faith for exactly this reason.

But they never go on the road unprepared. Often, they’ll fill up their beaks with enough food to last them for a few days, or even up to a week. This symbolic meaning of pelicans can give you direction in your life when you need it.

However, it’s even more important if you’re someone who likes to travel a lot. For travelers, the meaning of direction with pelicans can help them discover a sense of direction, and it’s also telling them to stay prepared before they hit the road. At the same time, they will often work with other species along the way, such as sea lions or dolphins, to survive.

Pelicans have become highly symbolic of the act of humility, too. This is because they feed their babes with their own blood.

But as a species in general, pelicans are one of the most down-to-earth animals you’ll find. Normally, they’ll only hunt enough food to sustain themselves and their families. They’re also always prepared to help out others, especially when they travel around the world in larger groups when they have to work with a lot of humility.

Pelicans mostly represent positive things in different cultures, but that’s not always the case. Let’s see how they’re viewed in various cultures of the past and today.

The second symbolism from the Ancient Egypt of pelicans is of protection. Often, these animals were placed and depicted in tombs because of their ability to protect a deceased person. Also, they were thought to present a safe passage to the underworld to someone who died.

The Murri people from the Queensland, Australia area of today had a special origin myth that contained a story about pelicans.

In this story, the evolution of pelicans is described, and how they went from having black plumage to having black and white plumage. In it, a pelican creates a canoe for people to escape during a flood. The bird falls in love with a woman he saved but is then tricked by this woman and her friends.

To take out revenge, the pelican prepares to go to war. He starts to paint himself with the white color for war paint. At that time, he’s spotted by another pelican, who mistakes him for another bird, so he decides to kill the pelican that’s painted itself white. That’s why, according to the Murri people, pelicans remain black and white.

In Spanish, the name Alcatraz is derived from brown pelicans that are thought to be nesting around the area of the island. It’s also thought that the word albatross is derived from a version of the word Alcatraz.

The pelican had and still has a big influence on Christianity.

Because of its vulning behavior, it’s perceived as a symbol of sacrifice, humility, and piety – which are all qualities of Jesus Christ himself.

A pelican was also a commonly used theme in heraldry, especially because of the above-mentioned qualities. Many organizations and companies had the pelican vulning as its symbol, such as the Corpus Christi, for example.

It’s also the official symbol of Louisiana, which is often referred to as the pelican state. It’s a symbol of New Orleans Pelicans, several American universities, as well as some sports teams from all over the world. 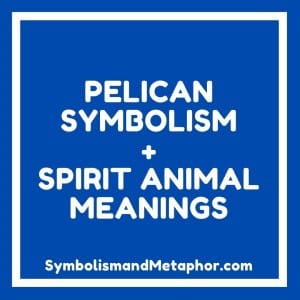 The pelican spirit animal teaches you to be prepared to help out others and be generous – but only when you see fit.

A big part of this symbolism is pelican vulning, which inspired several cultures, countries, and organizations to adopt this bird as their official symbol. That’s why it’s considered to be an important symbol, even today, and it’s been one ever since the times of Ancient Egyptians, who considered the pelican to be the symbol of death and the afterlife.