The cardinal bird is a beautiful creature. With its red plumage and exciting appearance, it has been linked to many different meanings throughout its existence. Even Native Americans and Christians have included the cardinal symbolism into their lives.

Everything around us carries some form of symbolic meaning. Whether it’s what we see, hear, or smell, our senses are normally bombarded when we’re out in nature. Something perhaps even more interesting is that almost every single one of those senses are trying to tell us something.

The symbolism of the cardinal bird might be subtle, which makes it even more surprising. Their red color means they’ve become a symbol of passion and love. Even for Native Americans, seeing a red cardinal bird meant that they were in for a romantic relationship in their lives.

It’s interesting to observe the different meanings based on the qualities that cardinal birds portray. We can extract many meanings through their behavior, but also through their appearance.

One of the primary meanings of cardinal birds, especially red cardinal birds, is that of love. That’s perhaps primarily linked to the color of their bodies, which makes them stand out in their natural habitat. Their red color is a very strong hue of red that screams passion and love.

Perhaps this meaning is also closely tied to their behavior, too. They’re very family-oriented, and they’ll try to do almost everything they can to take care of their families. This shows they have a warm character, too, which is another quality we normally link to love.

As spirit animals, cardinals will normally signify that you should pursue your romantic relationships in your current life situation with passion. But we’ll talk more about the meaning of cardinals as spirit animals later on.

Cardinals will find themselves in one territory for the entire year, meaning they’ll stay in one area for most of their lives. Their natural habitat is open woodlands, especially in foresty areas of the south-eastern part of North America.

They don’t migrate – instead, they huddle up with their family and try to create a cozy habitat for their offspring. So you might come across a cardinal bird in your backyard even during winter – something that’s quite rare to see.

This goes to show these animals are quite loyal to their families. They’ll establish themselves in one area and they’ll rarely leave that area after they’ve settled. That’s quite rare for birds, especially for smaller bird species like this one. Normally, birds will leave their families or migrate when they grow up.

Cardinals will mate for their entire lives. They’re monogamous animals, although they’ll normally choose a different mate each breeding season. Male cardinals will then attract females by showing off his crest, which is made to impress the female and lure her into breeding.

Most cardinals will breed between March and September. Every year, they’ll raise up to three broods, and they’ll nest between 3 and 4 eggs each breeding season. These eggs will hatch around 13 days later.

Their ability to reproduce like this year after year makes them a powerful symbol of fertility. They’re consistent with their breeding, which is something that we come to admire as human beings.

During the winter, nature goes to rest. Leaves start falling in fall, and during the winter, trees are without leaves and look somewhat bland. Most animals will seek shelter and hide as the cold days creep in; other animals will leave cold areas and go to warm areas in the world, especially birds.

However, one of the rare animals that will stay in one particular area is the cardinal bird. They’ll stand out in the whiteness of a snowy landscape. You won’t miss them when they visit you in your backyard, too. With their red bodies, they’ll represent a sign of life when everything else seems to be dead.

In a way, they’re also a symbol of renewal because of this. They’re one of the first signs of renewal of nature, even when other animals hide and there is no sign of life in nature.

Another bird that symbolizes renewed life is the bald eagle.

All birds carry this symbolism, to an extent. But it’s even more apparent with cardinals. For this bird species, it’s typical that you’ll hear both genders sing a song, not just the females. It’s unusual behavior and one that has led them to become a symbol of spiritual messengers.

Even hundreds of years back, when Native Americans encountered red cardinal birds, they were surprised by this behavior that they’ll sing, even the females. So they saw them as this figure that was trying to convey a message to them from the Gods.

Because these animals are vocal species, we also connect them to honesty often. Even though it’s not always true, we perceive those who are a bit more vocal to be more trustworthy and honest.

And that’s perhaps why cardinal birds have become the symbol of honesty and truthfulness. They’re telling us something we don’t know or something we don’t want to know, perhaps. However, this quality, or this symbolism, can also be observed with almost any other bird species.

Honesty is also a quality we really appreciate when we talk about other human beings. Native Americans believed that cardinal birds represented an honest voice from above, as they were telling them what the Gods were thinking about their deeds.

As a spirit animal, the cardinal will lead you to become more passionate in your relationships, especially with your partner. This is one of the stand-out symbolic meanings of cardinal birds; although it’s far more typical when we think about red cardinals.

And this link makes a lot of sense when you think about the nature of cardinal birds. Firstly, they’ll stay in one area for the entire year – 12 months, so they were meant to be protecting Native Americans. Secondly, cardinal birds will normally lay 12 eggs, which is yet another important link to the number 12, which was the lucky number.

Normally, we don’t talk about romance when it comes to Native Americans and their culture. However, this is a rare exception. Even for Native Americans, red cardinal birds represented a quality of love and romance.

They were thought to provide them guidance in their lives when it comes to romantic relationships with their partners. And this symbolism is still very present today, even for Native Americans.

Another romantic bird is the Flamingo.

Lastly, Native Americans liked the vocal nature of cardinal birds, which is why they often connected this bird to honesty.

These birds (and all other bids, for that matter), were meant to be spiritual messenger conveying a message from the Gods. That’s why they liked and valued birds so highly.

If you have the cardinal bird as your spirit animal, then you can expect a new romantic relationship to make its way to your life very soon. This partnership, or relationship, will be a joyful and playful one, which is signified by the playful cheering and signing from the cardinal bird itself.

The cardinal bird is also an important spirit animal to empower your thoughts and feelings and will give you the power to convey these feelings to others. Cardinals are highly vocal animals, so they’ll encourage you to let your feelings be heard and known to other people around you.

Lastly, the cardinal bird teaches you to remain loyal to you and your family. Because these birds will largely remain loyal to their surroundings, you will do well to do the same, even when things get tough. 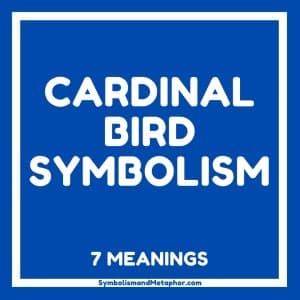 The cardinal bird is an interesting animal. Their red bodies make them a highly symbolic bird, too. They’re a symbol of love and passion, which is closely tied to their appearance, but also to their flamboyant behavior. Even for Native Americans, red cardinal birds represented love and romance.