Magpies are some of the most intelligent creatures in the world. It’s also a joy to watch the expressed black and white plumage of the magpie while it’s singing its song. That’s why we often connect magpies to the qualities of joy, intelligence, communication, and social life.

Another interesting quality that magpies have is their inclination to steal things. In European folklore, magpies are branded as stealers, as they have been seen on several occasions stealing metallic and shiny objects, as well as other animals’ food. There’s an interesting reason behind this behavior, which we’ll discuss later. This makes them a symbol of deception.

In the Western world, however, magpies are not always welcome. They’ve often been associated with the act of witchcraft and illusion, signified by their black and white appearance.

Magpie symbolism stretches across the entire world, and we’ll take a closer look at some of those meanings here.

Meaning and Symbolism of Magpies

Just like most bird species, magpies are highly active and like to sing a lot. They’re loud communicators, although their singing is not as loud as that of other birds. But their bright behavior and gentle singing make them a symbol of joy.

They’re also social animals, which reminds us to get along with other people and be social ourselves. In nature, they’re quite reclusive sometimes, which is partly due to the fact that they want to protect themselves. But in cities, magpies are quite social – even so much so that they’ll become friends with humans!

Similar to crows, Magpies are far more intelligent than most people perceive them to be. They’re one of the very few animals capable of recognizing themselves in the mirror. This is quite impressive for an animal of such small stature.

Another quality that makes them seem like they’re intelligent is their ability to learn spoken language, and to communicate with us. This behavior also goes to show their social aptitude and their ability to remember things.

Even though they may not seem like it, these animals are intelligent creatures. And perhaps even more intelligent than most other bird species you’ll come across.

Yes, magpies are perhaps not the loudest birds in the world. However, their frequent singing and constant “talking” makes it seem like they’re trying to say something to us. They’re quite gentle in their singing, though.

They have a very energetic approach to life and one that’s suitable for everyone that wants to be more social. As such, they’re symbols of communication and social life and will represent that to you if you’re someone who has the magpie as their spirit animal.

Another bird that symbolizes communication is the woodpecker.

There’s an interesting mechanism behind their stealing behavior, though. They’re known for stealing shiny objects, but in truth, they’re not actively stealing them.

Apparently, scientists have uncovered that these animals are nervous about shiny objects. They’re afraid of new things, which is why they take shiny objects as new things and they place them somewhere where these objects are not visible to them.

It’s an interesting behavior to observe, although it’s doubtful that many people who have had their objects stolen by magpies will appreciate it!

Another animal that symbolizes receipt is the toad.

Similarly, magpies play a very prominent role in European folklore as animals of illusion, magic, and even witchcraft. This probably stems from the Middle Ages when people were quite superstitious.

Women were burned at stakes for accusations of witchcraft, while magpies were deemed as a symbol of witches. Perhaps it’s because these animals made close ties with the “witches”; or perhaps it’s due to their black-and-white appearance, creating that elusive look that resembled witches.

This magpie symbolism also probably has a lot to do with the fact that magpies actively destroyed farmers’ crops. The common folk was not that keen on magpies, and it’s also why they chased them away actively.

Despite the negative perceptions, magpies tend to inspire us creatively, especially artists who are seeking inspiration from nature. These animals are very communicative and will inspire us to be the same.

However, it’s also the appearance that will spark some creativity. Their black and white coat is a joy to behold, especially when we see these birds in nature. And when they start singing, it seems as though these animals are even talking to us, trying to convey a message that we need to hear.

Magpies are also perceived as opportunists. They’ll pounce on their prey when it least expects to. And they’ll also steal food away from other animals, especially birds. They’ll usually form groups of 3 or 4 in order to intimidate a lone bird and try and steal the food it has on its “plate”.

Magpies live all over the world. They’re found in foresty areas of North America and Europe, as well as Asia. There are minor differences between these species, although these birds are mostly the same.

This just goes to show their adaptable character and nature. They’re capable of surviving even in very harsh conditions, which shows their ability to provide for themselves and for their families. They’ll usually find food where there is no food to be found, and they’ll even play up a trick or two in order to get what they want.

This might not make them the most popular animals in the world, but it gets them food, which allows them to survive even when it seems impossible to.

There’s a great deal of spirituality involved with magpies. Historically, these animals were meant to be bringers of bad luck, especially for farmers and the common folk.

However, today, magpies can play an important role in your life as a spirit animal. People with magpies as their spirit animals are normally risk-takers, and they believe in their chances even when the odds are stacked up against them. Just like magpies do when they try and steal shiny objects or eat a farmer’s crops.

Magpies also teach you to be adaptable and patient when it comes to your life. This means that you should fight for your rights, but only when the time is right. This is highly characteristic of magpies, who are willing to wait for quite a long time until they strike.

Another very important lesson we can learn from magpies as spirit animals is that we should not focus on materialistic things so much. These animals like shiny objects, but it’s not because they’re greedy, but rather because they’re nervous about them. They don’t like new things, and so they guide you not to be impulsive when it comes to spending your money on materialistic things. 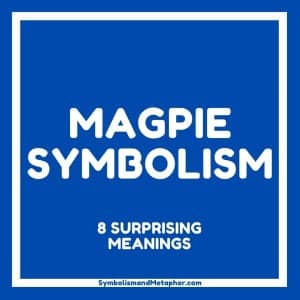 Magpies have some interesting meanings, and they’re closely tied to how they have lived with human beings throughout their existence. For many people in the past, magpies were a symbol of deception and even theft, meaning they had a negative meaning.

Today, magpie symbolism has changed. We connect them to materialistic things and our materialistic wishes often. They’re also effective communicators, showing us to be more social and adaptable in our lives.

1 thought on “Magpie Symbolism & Meanings in Dreams and Culture”