They’ll create thousands and thousands of holes in trees in order to locate their prey, making them a symbol of creativity, but also resourcefulness. And they’ll use their beak to communicate with other woodpeckers, too. They’re able to create signals with their beak that only their counterparts will understand, so they’re also a symbol of communication.

The woodpecker is also constantly at work. They will create thousands of holes every day, where they’ll store food and prepare for winter. They’re hard-working animals that will not stop through the entire day. Also, they’re able to collect hundreds of pieces of food, whether it’s acorns or other types of food, and store them in the holes they peck into the wood.

We’ll also explore the symbolism of woodpeckers for different cultures – most notably, woodpeckers played an important role for Native Americans.

The Meaning of Woodpeckers

Here are the most common woodpecker symbolism meanings.

At the same time, woodpeckers constantly look for new opportunities and for new openings, as they’re not afraid to peck thousands of holes every day in one tree, whether it’s to locate new prey or simply to store their food inside these holes.

So the pecking of woodpeckers might represent a new opportunity. At the same time, they might be signalling major changes happening soon in your life, especially if you hear them pecking away at a tree near your location.

You might not know this, but woodpeckers use their beaks to communicate with their counterparts. By drumming with their beak, they’re able to produce reverberatory sounds that can be heard by other woodpeckers from miles away.

So their pecking plays an even more important role than just that of creating holes inside trees. But they won’t use only wood to communicate this way – instead, they might find themselves pecking away at gutters, chimneys, vents, and other types of materials that might produce these sounds and vibrations.

All of these interesting facts make the woodpecker a strong symbol of communication.

Another bird that symbolizes communication is the Magpie.

Every day, the woodpecker will seek food and try and locate it in different sources. They might find it easily on trees and on the ground in the form of acorns or other fruits of nature. Then, they store this food in the holes they make with their beaks in order to save it for the winter.

But other times, these animals will have to get more creative to get food. They’ll often peck away at rotten pieces of wood where they are hoping to find food for themselves in the form of larvae or insects. They often succeed, although that food is not to be stored, but rather fed to their offspring.

Also, observing their “creations” in nature is nothing short of fascinating. When you see a tree that’s been “modeled” by a woodpecker, you’ll be amazed at how many holes it can create and just how much they can change the appearance of a tree.

Another bird that represents creativity is the mockingbird.

Some woodpecker species are considered endangered, such as the ivory-billed woodpecker – however, most other subspecies of woodpeckers are found all over the world, especially in areas with a moderate climate and foresty areas.

And their ability to store their food for winter shows that they’re able to prepare and be ready even for the harshest of winters. They’re resourceful and know how to survive, which makes them a symbol of resourcefulness.

The work rate at which woodpeckers live is nothing short of sensational. During the winter, they’ll spend most of their time conserving energy, but that’s mainly thanks to their preparation during the summer and also spring.

That’s when they’ll create thousands of holes every day in a tree – it is said that a single mockingbird can create up to 10.000 holes in just one day! That’s astonishing for a small bird of this stature, and it’s hard to imagine that they’re even capable of doing that much in just one day.

And they won’t stop until they feel completely prepared for the entire winter. They’ll find food and store it every day, and they’ll also need to create nests inside the holes they create. Finding food for their offspring also ensures that woodpeckers never run out of work, even during the quiet summer days.

The woodpecker is reminding you to follow your own rhythm, just as they have a rhythm when they’re pecking away at the tree. This is to create some balance in your life. It’s certainly an interesting symbolism but when you think more closely about it, it makes a lot of sense.

Woodpeckers are incredibly tough animals. They’re able to create thousands of holes in just one day, and all of that with just their small beak. That’s an impressive feat, even for an animal that’s known for its hard-working nature.

And as a spirit animal, the woodpecker teaches you to become tougher in your life, too. These animals are incredibly sturdy and capable of surviving even in the harshest of conditions, but that’s mainly thanks to its preparation but also because of their sturdy nature.

Another message we can learn from woodpeckers is that of determination. As we’ve already mentioned, these are hard-working animals, although they wouldn’t get near their goals if they weren’t determined to survive.

So if you have the woodpecker as your spirit animal, it encourages you to stay determined no matter how hard it gets in order to achieve your goals. There are opportunities waiting for you around the corner, but without determination, you won’t be able to attain them.

Meaning of Woodpeckers in Different Cultures

Woodpeckers have been around for a while, and every culture interpreted woodpecker symbolism differently.

For Native Americans, the woodpecker represented the quality of the home and the importance of protecting one’s home. Woodpeckers often featured in several myths and folklore tales.

One of the more notable ones features the woodpecker and the turkey, where these two animals compete for the title of the protector of humankind. The woodpecker wins in the tale, because of its ability to create a home and its ability to protect their home but also their family. It’s fair to say that woodpeckers played an important role for Native American tribes.

In Norse mythology, the woodpecker is closely tied to Thor, the god of thunder. It was a symbolic animal because it creates noises as it “thunders” against a tree with its beak. Some woodpecker species even create holes in the ground, which closely resembles the noise of thunder, which is why the Norse connected it to Thor.

For the Celtic tribes, woodpeckers were thought to be a symbol of rain. Perhaps it’s because of their ability to make holes and to create sounds in a quick manner. This symbolism is not quite clearly explored yet, although it is said that it has something to do with its powerful screech.

Picus was also first recognized as a species in Central Europe by Romans. They established that only 2 subspecies of woodpeckers live in Europe, while there are also 13 other species that live in other areas of the world. 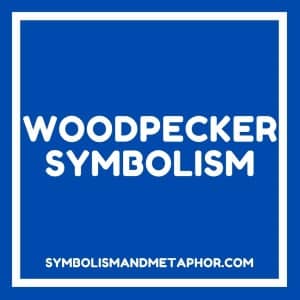 Woodpeckers are famous for their pecking, which makes them highly symbolic in many instances. Their pecking might represent a new opportunity that’s waiting for you, knocking on your doors. Also, their communication patterns are interesting and quite unique to their species, making them a symbol of communication.

Their peculiar nature was also liked and observed by several cultures throughout history. Romans, Native Americans, Celts, and the Norse all had their own symbols and interpretations of the woodpecker.