The mockingbird is a special type of songbird. In the Western world, it’s often a symbol of innocence, as it has gained its reputation as a bird of innocence through various literature works – the most notable being To Kill a Mockingbird by Harper Lee.

But mockingbird symbolism extends far more than just to the symbolism of innocence. This bird has an exquisite ability to imitate other animals, such as insects and birds. This makes it a symbol of a mirror and even imitation.

This bird will also fight for its life and for its rights when push comes to shove. When they’re threatened, they’ll defend their territory vigorously and often until death. They’re determined, making it a symbol of determination, territoriality, and even confidence.

Because these animals are hugely symbolic, they’re also widely present as spirit animals, so we’ll stop and take a look at what the mockingbird brings to you as a spirit animal.

Contents show
The Meaning of Mockingbirds in To Kill a Mockingbird
Other Mockingbird Symbolism
1. Imitation
2. Determination
3. Intelligence
4. Family
5. Confidence
6. Territoriality
7. Curiosity
The Mockingbird as a Spirit Animal
Conclusion

Quick Answer: In To Kill a Mockingbird, the mockingbird symbolizes innocence.

The mockingbird is represented through a variety of characters in the novel that are either injured or severely harmed. This represents the act of overcoming innocence in a very symbolic way.

This is why these birds have the ability to attract and even hunt other insects. They disguise their voice in order to attract these insects to them, so they’re able to get them and have some food.

When it comes to defending its own rights, the mockingbird is arguably among the bravest animals in the world. It’s determined to defend its territory until its bitter end, even if it’s facing a much stronger or a much larger opponent.

Paired with their ability to recreate sounds of other animals, they’re able to scare away other animals and stay put. With their strong survival instinct, they can live in almost any area of the world, excluding arctic areas.

The mockingbird is among the most intelligent bird species in the world – aside from magpies and ravens. Their high level of intelligence is seen in their ability to mimic other animals and manipulate them in such a way that they profit from them – whether it’s to defend themselves or to attack.

They are able to recreate up to 20 songs at once, although they have a larger repertoire than that. In the long-term, these animals can recreate the sounds of 30 or more animals. They also have the ability to hide when they attack. Because of their long legs, they’re able to hide in the foliage in order to hunt down their prey.

And their behavior also goes to show how intelligent these creatures are. They attack when they see the opportunity to do so, although they’ll hide and stay quiet when they’re under threat, too. They’re very shrewd when it comes to survival.

Because these birds will defend their families fiercely against any potential predators, they’re also a symbol of family. They’ll do everything they can to feed their family and to protect them from the potential dangers of the surroundings. And they’ll also feed their offspring until a relatively late age when it comes to birds.

Their vocal nature and their ability to withstand tough times make the mockingbird a symbol of confidence. Firstly, because they’re able to imitate various sounds and because they sing constantly, they’re representative of outgoing people who like to talk a lot. As a spirit animal, it teaches you to be more confident and become more vocal.

Secondly, it’s a symbol of confidence due to its ability to come up against other animals – especially larger and stronger animals when they’re threatened. Again, this makes them a powerful symbol as a spirit animal, as it encourages us to come up against our challenges in our lives and withstand pressure.

They’re not afraid to express themselves, which is quite similar to what an outgoing person would do – someone who likes to make their feelings known and heard. This is why the mockingbird is a symbol of confidence.

Mockingbirds are prepared to do anything they can to defend themselves and their territory. Even if they come up against a stronger opponent, they’ll stay put and defend. They’re known as one of the fiercest animals when it comes to defending their territory.

Along with the Blue Jays, mockingbirds are among the toughest opponents when they’re provoked or attacked. At the same time, they’ll try and attack every opponent that seems to be living too close to them, and that look like they might be threatening their family.

This is perhaps not the most positive quality to have, but certainly, one that can serve you well in your life.

Another interesting symbolism of mockingbirds is curiosity. These animals like to explore the world around them and see other animals closely, and also study them. In an instant, they’re able to reproduce their sounds pretty accurately.

They’re quick learners, too. But that’s mostly due to their curious nature. They might spend hours and hours scanning their surroundings, although it might not seem so as they’re standing on their branch and singing their song.

Through this curiosity, they’re able to learn new sounds almost instantly. This is a commendable quality to have, and one symbolism that will serve you well if you want to follow the mockingbird as your spirit animal.

The Mockingbird as a Spirit Animal

Firstly, the mockingbird as your spirit animal leads you to become more vocal in your life. Whether it’s stating your opinions, talking to other people more, or becoming a more talkative person in general, this implication can benefit your life in many situations. It can work wonders for your personal life or your professional career.

Secondly, the mockingbird encourages you to live your life according to your ideas and according to your society’s ideals, too. Because it’s a symbol of innocence, it encourages you to live by certain rules but also to become creative when it comes to surviving in your life. This is especially in your job, where you might be required to show some creativity (for more creativity spirit animals, see our article on the woodpecker).

Lastly, the mockingbird as a spirit animal encourages you to become a role model for others to mirror. Whether that’s your children or someone else important in your life, you should represent qualities and ideals for others to follow closely, so that you can become a mirror for them, too. 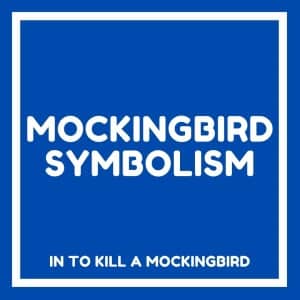 The mockingbird is one of the most prominent symbols of innocence, especially in literature. It’s a very peculiar bird in nature because it’s able to imitate other birds and animals. They’re quite shrewd and smart, but they’re not afraid to defend themselves from potential predators or aggressive animals.