Parrots come in a wide variety of colors and color patterns. This variety offers us a great chance to spruce up our homes and add parrots to liven up our surroundings. For centuries now, parrots are one of the most popular types of domestic animals there is.

But these animals have been around for far longer. They’re lovely animals not only to observe but to interact with. Some parrot species will even talk back to you, portraying the very well-known symbolism of communication. And because they’ll repeat words after you, they’re also a symbol of reflection.

Some symbolic meanings of parrots go even deeper. A very prominent symbolism of parrots is that of truth because these animals will never hold back and will simply repeat the words you’re saying – even some nasty ones!

The parrot also holds some very powerful symbolic meanings in art and as spirit animals. Let’s take a closer look at some of these symbols and how they are seen today.

First, let’s observe some interesting meanings of parrots in our everyday life.

One of the main reasons why people own parrots is because of the variety they have to offer. There are 402 sub-species of parrots in the world, and the list keeps expanding every year. They belong to three bigger families of parrots, which are: the Psittacoideia, also known as the common parrot. The second family is the cockatoos, and the third is the New Zealand parrot group.

Each of these groups then has hundreds of interesting and unique species that you can choose from. All this variety gives you an immense amount of choices, not only in terms of appearance but also in terms of behavior.

Some parrots will talk, while others like to sing more. You’ll find parrots in just about any color imaginable – from red, blue, green, yellow, purple, black, white, and even pink. Or even better – a combination of several of these colors! Variety is perhaps one of the first things that spring to mind when we think about parrots.

Parrots are very communicative animals. They like to be very loud and they almost talk to us if you teach them how to pronounce some words (see also: mockingbirds). Of course, some parrot species will learn that on their own – and sometimes, it might be words you don’t even want them to learn!

But it’s always interesting to see how parrots communicate and talk to each other and to us, too. They are not afraid to get vocal, and when they do, you’ll find yourself in a very loud environment. Many parrot owners report that when they own a parrot or several of them, their house often turns into a cacophony of sounds.

Some parrot species have become famous for their ability to pronounce and utter words that they repeat after us. It’s always exciting when that happens, and it’s a huge reason why these animals are so popular, too.

Another animal that also symbolizes communication is the Goose!

Parrots that do repeat words after us will speak only the truth, whether you like it or not. They’ll only repeat words after you, but they won’t have a filter that they’ll use when they speak. This is something to be mindful of, and of course, you’ll sometimes find yourself uttering words that you don’t want.

This ability lead them to become the symbol of truth. Their ability to speak without using a filter for the words they use is sometimes an admirable trait – although one that not everyone will appreciate when it comes to humans.

When parrots talk, they only often reflect words you have uttered. This ability makes them popular with kids who teach parrots to pronounce some words – even the bad ones!

As such, they’re also a symbol of reflection. Because no matter what you say, they’ll pick up on your words, even if they’re not that appropriate. They’re almost like a mirror of us – each parrot owner will have specific words they use, and these parrots will often learn these specific words that they wouldn’t learn anywhere else.

One thing that parrots are also famous for is their social behavior. These are social animals that thrive when they’re in the midst of it all. They love kids because they love the attention they get from kids, although they don’t really like to be picked up or touched – you might have noticed that if you’re a parrot owner already!

They like to socialize with humans (unlike barn owls), but also with other animals. They’re friendly creatures that will mostly get along with other parrot species, too. As long as they’re given enough space and the right conditions to live, they’ll thrive and show this social behavior they have in the best way possible.

We’re not sure what it is – maybe it’s their portrayal in the movie Pirates of the Caribbean where a lovely macaw appears as the pet of Cotton. Or perhaps it’s the wide variety of colors they’re available in.

There’s just an element of magic and mystique about parrots. They also have this “magical” ability to repeat words and recreate sounds from their environment – something very rarely seen with any other animal.

Parrots are also playful animals. In many ways, they represent our ability to go about our lives with a lot of energy and in a playful manner. They’re also almost symbolic of our childhoods because of the many tricks we can teach them and their ability to speak.

These animals are one of the most popular pets for kids for good reasons. They’re quite loyal, but perhaps one thing that makes them more popular is their energetic behavior and their colorful display. They’ll be quite active during the day, rarely taking a rest. And when given the chance, they’ll be back to their shenanigans.

Symbolism of Parrots in Art

Because of the colorful display they have, parrots have played an active role in art, too. Artists just love painting or drawing parrots, because they offer them every excuse to go wild and creative with the colors.

But the more interesting thing is that parrots also play a very symbolic role in art. All of the qualities we’ve mentioned above make them a highly popular figure in art. They’re most commonly present in portraits and still scenes where they carry a special symbolism or even add some meaning to the work of art.

One of the major projections of parrots in art is that they’re portrayed as truth talkers. While they do talk quite a lot when given the chance, they’ll only speak what they hear. Kids are especially fascinated by this, and their ability to recreate the sounds they hear without a filter makes them a powerful symbol of truth in art.

Another interesting and powerful meaning of parrots in art is that they’re portrayed as a mirror to us, human beings. In some ways, they even mock us and our behavior. They see the world differently, and without the filter we carry. In art, they act as our personal mirror where they tell us exactly what they feel.

Another symbolism of parrots in art, although not that common, is that they sometimes play the role of a surrogate lover to a woman. This one’s a bit different but also quite unusual, but they are sometimes portrayed as true and loyal lovers – which is what many women desire.

Meaning of Parrots as Spirit Animals in Dreams

Parrots as spirit animals have a very distinct role.

Often, they will prompt you to try new ideas and do something fresh – instead of going back to the old ways. This is largely inspired by their variety and their unique character. Perhaps it’s in your own life, relationships, or at work where you need to follow this.

Another very meaningful way parrots can affect our lives as spirit animals is that they teach us to improve our communication skills. Whether it’s learning new languages, becoming friends with new people, or simply learning how to carry on our conversations, having this skill is one of the more important ones today.

Also, parrots can inspire you to bring back some color to your life. This applies whether you’ve recently lost some motivation in your life or you simply want to make a change. If you follow how colorful parrots are, you’ll be able to create a whole new life for yourself – with some small and effective changes that bring back color to your life, more variety. 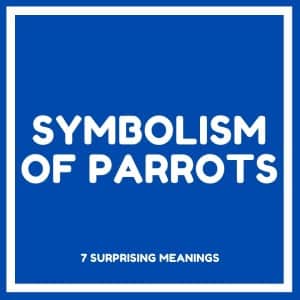 The symbolism of parrots is a powerful one if we decide to follow what it preaches to us. It’s closely tied to their bubbly and varied personality, as they tell us to learn how to communicate effectively. They’re also truth-tellers, which is a quality that’s often lacking in today’s world. Read about the symbolism of other birds like Heron, Wren, Sparrows, and Flamingos.