Owls are, in general, very symbolic animals. They’re hidden and kept away from our lives. This adds some mystique to their character and their behavior only supports that.

Barn owls are especially secretive and like to remain hidden. They have developed better eyesight than most other types of owls. So they’re able to hunt in the dark even when there’s no light at all.

That’s why they’ve developed other senses to help them out in the dark. They have strong hearing abilities and intuition, so they’ve become a symbol of listening. They’re quite productive animals, too. As they hunt in the dark, they tend to hunt down their prey relentlessly, waiting in the shadows until they strike.

The symbolism of barn owls strongly reflects their secretive character, although there are some meanings that might inspire you with the barn owl as the spirit animal.

The 8 Meanings of Barn Owls

Barn owls are very rarely seen. They have the ability to hide and strike when they need to. However, it’s often possible to hear them very clearly with their loud, shrieking voices. To the prey, those voices can be frightening – as is for some humans, too.

Owls have a very strong level of mystique about them. Because it’s hard or almost impossible to see them, they’re sometimes forgotten about. But somewhere in the dark, the barn owl is watching and noticing every step their prey makes.

Owls are good listeners. Barn owls, in particular, have their ears placed disproportionately so that they’re able to listen to sounds from all around them. Barn owls have one of the best hearing abilities out of all animal species on earth.

At night, they have to rely on their senses to catch their prey. Their ability to listen to very deep sounds allows them to clearly hear even the smallest of noises. This gives them a clear advantage over many other animal species that can’t see very well at night.

Owls, in general, are symbols of listening. They like to remain quiet but when they do raise their voices, they’ll scare anything around them.

One thing that we can associate barn owls with is darkness. They do most of their work and their hunting during the night. They use sound to locate their prey, and they like to fly low over marshes and lower areas to hunt for rodents.

During the day, the owl is not seen very often. That’s because they tend to rest and kick back during the day, while they do most of their activities at night. Perhaps you’ve already heard an owl’s cry during the night, which gives you a good indication that these animals prefer to stay active at night.

Barn owls are also very productive animals, too. Even though it’s rare to see them during the day, they’re still active, although they tend to hide. But these animals come alive during the night when they take advantage of their strong hearing abilities to hunt.

They like to hunt rodents or smaller insects they can locate with their strong hearing senses. In one night when the conditions are right, barn owls can catch up to 5 mice just for himself. This is an incredible achievement that is hard to top, even for other avid hunters. That’s why they’re considered to be one of the best hunting animals during the night.

Not to forget that the barn owl has to provide for its babies, which forces it to catch even more mice. And if you count that in, they are able to catch more than 30 mice in just one night. That’s why many farmers like to attract barn owls to come to their location in order to reduce the rodent population around them.

Fear of the Dark

For many people, the owl’s shrieks and cries represent a source of terror. And rightly so, because barn owls do let some quite terrifying shrieks as they’re out and about. But these noises play a very particular role for barn owls: the main role is to allow them to scare their prey and make them numb, which is also a part of why they’re so productive.

Another reason why they have this shriek is to protect themselves, too. When they hunt, they’re exposed to other predators that like to wander around the lowlands and marshes, where barn owls tend to be most productive in terms of hunting.

You can listen to their shrieks here. It’s a truly horrifying shriek that sounds like something right out of a nightmare. Pair that with the owl’s elusive behavior, our inability to see them, and their big eyes, and they form quite a formidable and scary package (although they’re not harmful to humans).

Barn owls often rely on intuition to catch their prey, as well as their strong hearing ability. But because they can be so effective in the dark, we also connect them to a sense of intuition.

We can connect that to a much deeper meaning than just their eyesight. Often, it’s the ability to see what others don’t see, and that’s a highly valued ability in today’s world. Just like barn owls can see what others can’t, having a strong intuitive power can give you a big advantage over other people who only see things in one dimension.

Also, this intuition can serve you well for deciphering other human beings. It’s the ability to see behind the “mask” of another human. This is a highly symbolic meaning of barn owls, although one that cannot be ignored.

Because owls only come out when they need to, they’re also symbols of wisdom. They’re intelligent creatures that will attack when the chance is right. Also, they won’t be as vocal when they don’t need to be, and they’ll wait for their moment when they strike. (See also: light symbolism).

This element of wisdom in barn owls has been portrayed in popular culture quite a lot. In general, owls tend to be portrayed as a professor-like figure in movies and even cartoons. They have also become symbols of various institutions and is even the main symbol of Athena, who was a Greek goddess of wisdom.

For the majority of their day, barn owls go about it silently. They only make noises when they absolutely need to, such as when they’re in danger, or when they’re hunting their prey. However, they stay conservative and take on an observer’s role rather than participating actively in forest life.

This ability is also partly responsible to make barn owls symbols of wisdom. They’ll only make sounds when they have to. That’s why owls are also sometimes present as symbols in the library – wisdom, silence, observing.

Barn Owls as Spirit Animals and in Dreams

Barn owls are also often present as spirit animals, because of their highly symbolic nature.

As a spirit animal, the barn owl guides you to see through deception and to recognize the hidden meanings of words and actions. They allow you to clearly see what is going on behind the scenes and read someone more fully rather than just observing what’s on the surface. It’s about seeing someone else’s true intentions or state of mind.

Like other types of owls, barn owls also guide you to live your life with wisdom and intuition. They teach you that it’s better to go about your life quietly and only come out when it’s good for you. Through these wise actions, you’ll be able to think and see more clearly what your purpose is.

With those two qualities in mind, you’ll be able to make intelligent decisions, which the barn owl guides you to do. When you’re going through confusing times or when you’re unsure of something in your life, you can call on the barn owl spirit animal to help you make these decisions.

Another commendable lesson that barn owls can give you as spirit animals is to face the unknown and face your fears. Just like barn owls hunt during the night, you should dive deep into areas of your life that seem dark and left unexplored. And you should try to do that without fear of making the wrong decisions calmly.

These are all powerful meanings of the barn owl as a spirit animal. They make for great spirit animals when you need some calmness and guidance in your life. 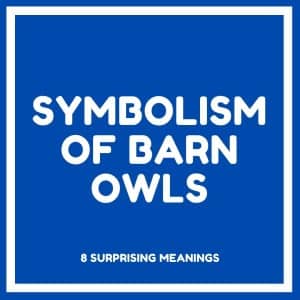 The barn owls carry some strong symbolic meanings with them. The symbolism of barn owls clearly extends and connects with their character and how they live their lives. They like to remain hidden and observe their surroundings calmly, leading them to become symbols of wisdom, mystique, silence, and listening.

In many ways, barn owls are polar opposites to sociable birds like geese, parrots and flamingos.

They also rely on their hearing ability and intuition heavily in order to survive and catch their prey. You can take all of these qualities and apply them to your life if you have the barn owl as your spirit animal.