The albatross is considered a mariner’s friend. For centuries, this bird represented a symbol of good luck for navigators, and they also became an exalted animal among mariners. As such, they’re symbolic of navigation.

Their famous status among mariners is even better seen through the albatross complex. This complex is essentially a curse, although it’s been widely recorded in literature – especially in Samuel Taylor Coleridge’s poem called The Rime of the Ancient Mariner. This has led to the albatross metaphor – “an albatross around your neck” – which means you’re cursed.

They’re also symbolic of finesse, peace, but also freedom, direction, and travel, and divinity. As a spirit animal, the albatross can act as your guide in the world of emotions, so that you’ll be able to guide your emotions and better understand them.

There are some interesting albatross symbolic meanings to observe, so let’s take a closer look at them.

Symbolic Meanings of the Albatross

The albatross is a famous animal among sailors and mariners, and that’s where most of the symbolic meanings come from. But some of the meanings also come from the animal’s behavior patterns as well as its appearance.

1. A Burden or Curse (Metaphor)

The albatross metaphor states that a person who is cursed by a psychological burned “has an albatross around his neck”. This stems from the Samuel Coleridge poem The Rime of the Ancient Mariner which has the lines:

Instead of the cross, the Albatross
About my neck was hung.

So you might think that the albatross is always seen as a curse. But that’s not the case! Coleridge’s poem tells the story of a sea captain who shoots an albatross. After shooting the bird, the ship starts having bad luck. His crew blame the captain on the bad luck. By shooting a bird that usually symbolizes good luck (see next point), the ship was cursed. As a reminder of his deeds, the crew hung the albatross around the captain’s neck.

Historically, this is one of the most common albatross symbolisms. These animals were and still are considered a symbol of good luck for sailors. That’s why sailors admire these animals highly and constantly look for them when they’re out in the open. They’re also meant to provide them with some guidance and direction as they travel the sea.

For the sailors of the past, the albatross was one of the most important indicators for forecasting weather. Sailors, especially in the southern hemisphere, observed the behavior of these animals in order to predict what the weather will be like.

For example, when the albatrosses flew towards the north-west, and the winds were blowing from the western direction, sailors knew that a storm was approaching in a day or so. This gave them the ability to prepare for the storm. Today, the methods of predicting the weather are far more advanced, although sailors still admire albatrosses as a symbol of good luck.

Killing an albatross brings bad luck to a sailor. That’s an interesting symbolism seen especially in literature, which we’ll discuss later on.

The albatross is known as the Prince of Waves because it knows exactly where to move and how to predict what the weather will be like. This provided sailors with some guidance so they were able to follow albatrosses as they were facing uncertainty.

They’re capable of navigating large areas in just one day – they can fly at a speed of about 50 miles per hour, which allows them to travel up to 10.000 miles in just 50 days! At this speed, they would be able to go around the world once. That’s also why it’s so hard to study these animals – they’re quick and very rarely stay in one particular area for most of the time.

Add to that the fact that they’ll rarely touch the ground, and it becomes almost impossible to track them. And this is also partly why they’re considered such a shrewd animal by sailors. But it will stick to areas where the sea is, so they’ll only travel across the sea, but they’ll also avoid storms effectively, giving sailors a good indication where to go.

Despite the fact that albatrosses travel across windy and stormy areas, they’ll be able to navigate and find their way without constantly flapping their wings. When they get into their stride, they’re capable of reaching high speeds, so they won’t be affected by strong winds too much.

Watching them fly in the sky is fascinating. They pose an elegant figure as they do so, so they’ve also become hugely symbolic of elegance. They strive when the air is a bit windier, although they’ll mostly rest when the weather is calm.

They have long and narrow wings which they’ll rarely flap, and they keep their heads straight as they fly, creating this elegant figure in the sky as they fly.

They’re able to navigate tough areas where the air is windy and the weather conditions are not the best, too. This gives them the freedom to roam around and survive, although they also need to catch prey often in order to do so.

They’ll often scavenge ships for garbage and scrap food they’re able to find, although their primary source of food is squid they catch on their own. Because they often rest on ships, they’re often portrayed as the sailor’s friend.

Other birds that symbolize freedom are the eagle and falcon.

The albatross symbolism for sailors is so strong that it has achieved extraordinarily high levels – in some cases, even divine. It’s a sin to kill an albatross for a sailor, which tends to bring bad luck – or so it is believed.

Often nicknamed the Prince of Waves, an albatross is a sailor’s best friend. Today, this symbolic image is perhaps not that strong as it once was, but even today, we see albatrosses constantly portrayed as guardians of ships, and ships are often named after these animals, too.

For sailors, albatrosses once represented almost a godlike figure, although, with the development of technology, ships are able to sustain and avoid storms better, so albatrosses are not as important as they once were.

Some sea travel companies will employ the albatross as their symbol. As we’ve already mentioned, these animals are capable of flying immense distances over very short periods of time.

That also makes them an important symbol of travel. Perhaps this symbolism is still evolving and we might see it more in the future.

One of the main areas where albatross symbolism is widely observed is in literature. In one of his most famous poems, The Albatross, Samuel Taylor Coleridge crafts an entire poem around the symbolism of the albatross as a symbol of good luck.

In the poem, an albatross starts following a ship, which is often considered as a symbol of good luck among sailors. But the mariner is not that fond of the albatross, and he shoots it with his crossbow. With this act, the mariner brings on bad luck onto himself, because killing an albatross is considered a sin.

The crew of this mariner start to experience this bad luck – they’re hungry and thirsty, and they soon start blaming the mariner for killing the albatross – which is believed to have brought a curse to the ship. That’s why they hang the dead albatross around the neck of the mariner, which was meant to bring a feeling of guilt to the mariner.

The main meaning of the albatross as a spirit animal is that of guidance. When we get swept away by the winds of life, the albatross is meant to provide you with a guide that will help you get out of the storm.

Another meaning of the albatross as your spirit animal is that you should listen to your emotions a bit more. It gives you the freedom to express your true feelings, no matter how hard it may be for you to do so. 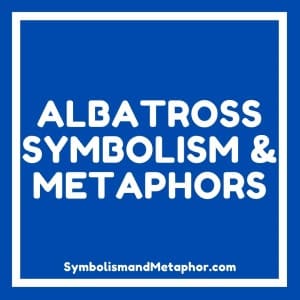 The albatross is an animal that has shaped the history of navigation. For sailors, the albatross symbolism is hugely important. They’re meant to bring them good luck but also guidance in order to avoid storms and go with the flow.

This is also what the albatross gives you as a spirit animal. It encourages you to have more freedom in your life but also gives you some luck when you need it. This elegant animal has been an important symbol for many centuries and continues to be that even today – especially as a spirit animal.