Leopards are the one animal everyone going on safari most wants to see. Distinctive, with a long, lithe body and streamlined tail, it’s smaller than other big cats. But it’s by no means less dangerous.

Some of these traits are also the things that have caught on most in the imagination of leopards across many different domains. From movies to astrology, dream interpretation to fantasy novels, it’s an animal with many faces. Not all these faces are positive either.

We often say a leopard can’t change its spots to refer to something stubborn or unchanging. But that’s not really true of the animal’s symbolism itself. Leopards, for the most part, are contradictory.

Due to their striking appearance and interesting character traits, leopards show up frequently in various books and films of the past. Each time they evoke different meanings.

Perhaps the most famous black leopard (or melanistic panther) in the modern public consciousness is that of Bagheera, the protector, and guardian of Mowgli in The Jungle Book. Bagheera is the character that takes the orphaned child in, shows him the rules of the wild, and nurtures his development. In Rudyard Kipling’s novels of the same name, he even calls to Mowgli, on their final departure, to “remember, Bagheera loved thee.”

In stark opposition to Bagheera’s figure is Sabor, another character depicted in a famous Disney movie, Tarzan (1999). Sabor is a typical African leopard, with the famous black spotted markings on top of a golden coat. She is also represented as a particularly bloodthirsty and destructive creature, responsible for killing Tarzan’s parents.

Leopards can also be quite mystical, especially when set inside dark, brooding fantasy novels like Philip Pullman’s trilogy His Dark Materials. Stellaria, the daemon companion of Lyra’s father Lord Asriel, is a snow leopard that’s by his side as he seeks to free the multiverse from a tyrannical Christian deity. Symbolizing leadership and ambition, she is also the physical representation of his soul.

Go back in history and read about the stories of man-eating leopards and you’ll notice one common feature; stealth. The Leopard of Rudraprayag, eventually killed by hunter and author Jim Corbett in India in 1926, was estimated to have killed over 120 people. Stalking its human prey in the shadows of night, as worshippers came to and from Hindu Temples, this beast operated undetected for years.

Even more clinical was the Panar leopard. Estimated to have killed over 400 people, this man-eater was also despatched by Corbett in 1910. Considered bold and difficult to track, the fact these two could operate so prolifically for years is a testament to their skill.

Aside from tales of the deadly and lethal, leopards also symbolize several positive traits. Most of these tally up with their physical attributes.

Able to comfortably climb 50-meter trees with prey (sometimes as large and heavy as a gazelle) in their jaws, it’s no surprise leopards are associated with being strong. The females of the species can weigh anything up to 60 kg while the males are a little heavier. Something which makes their strength all the more surprising given what they eat is usually bigger than them.

In fact, leopards are the smallest of all the big cats, dwarfed by both lions and tigers. Pound-for-pound in terms of what they can catch and kill, however, they are considered the strongest.

Having already mentioned the audacity with which man-eating leopards go about their world, their association with confidence is a clear one. From an astrological perspective, this quality of the leopard is also something well-noted in the possession or gift of a leopard totem. People owning one are said to encompass this trait by having a serious attitude to their life.

A leopard’s confidence is probably best exhibited in its stride. They move purposefully with grace and intent. They also never look to waste energy.

Power is next to strength when it comes to leopards being ruthless hunters. Capable of waiting in the darkness and then springing into action, a leopard in full pounce is a masterful sight to behold. Their muscular bodies show this symbol.

This might also be another reason why leopards are said to signify the idea of being able to do many things at once. Something that requires both power and energy.

Another animal that projects power is the bear – read all about it in our article on bear symbolism.

Ancient Egypt leaned on the symbol of the leopard as one of divinity and royalty. It’s also a figure that decorates many of their treasures and tombs, including that of Tutankhamun.

History also tells us the Egyptians kept leopards in private zoos and that their priests wore leopard skin garments during the performance of holy rituals. Pharaohs painted in poses showing them riding atop of the animals, was another common staple.

Egypt’s connections with Ancient Rome might also have helped prove the genesis of leopards becoming a strong feature in Gladiatorial games of the Colosseum and other Roman enclaves. Their influence spreads wide.

A leopards’ intelligence comes into play in various scenarios of its life. From hunting for food to protecting themselves from lions, they need to be smart and fast-thinking if they’re to survive. There’s also a lot of intriguing stories about captive leopards using ingenious thinking to problem-solve too.

One example comes from Florida’s Big Cat Rescue. Here a leopard was reported to sneak up and catch birds by setting pumpkin seed traps as bait. The same animal was also able to ‘feign death’, allowing other animals to sneak up to it before trapping and killing them.

An obvious symbol of the leopard is its unique gold and black patterning. This beautiful array of colors might have happened naturally through the process of evolution, but it’s no less a spell-binding sight. So much so that leopard-print has long been a part of Western fashion since the late 1800s.

African leopards have a top speed of around 35 mph (56-60 km/h). That’s fast for the animal kingdom but slower than the cheetah, another big cat that’s capable of speeds up to 100 km/h.

Still, speed has a place in the symbolism of the leopard. Its ability to burst into full-sprint at a whim, while also combining it with power, is part of what makes it a successful hunter.

For all its majesty and might the leopard can also signify some ugly negatives. Depending on the context, comparison to one could mean someone’s trying to tell you something less than complimentary.

Unlike lions that are pack animals, the leopard likes to live and hunt alone. Known for its solitary nature, it’s difficult to spot more than two leopards alongside each other in the wild. This might be because each has its own territory, marking it with urine, tree scratches, and poop.

Leopards are also nocturnal animals and largely inactive during the day. That’s why they’re sometimes seen sleeping on tree branches away from any potential disturbance.

The reverse side of a leopard’s beauty and power is the idea that the animal somehow knows it. Occasionally thought of as vain and self-obsessed, maybe it’s just jealousy to see an animal this way.

But that doesn’t stop it from being an association. 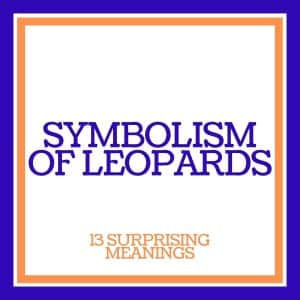 Leopards are a vulnerable animal with their species teetering on the brink of extinction. The symbolism of leopards, however, is far from it. Here we’ve seen several ways this rosette-marked cat has carved its way strongly into the human mind.