The symbolism of salt is intriguing. Composed of two simple elements; sodium and chloride, it’s hard to believe the impact it’s had on terms of human history and culture. 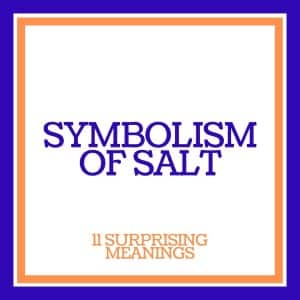 Serving as a major electrolyte in our body, without it we can’t survive. Beyond its role in physiological functioning, however, its importance is just the same. From its key roles in food preservation and seasoning to its help in birthing entire civilizations, every human living has its own individual memory of the mineral.

Here we take a look at some of the metaphor and significance salt evokes in spirituality and beyond.

Contents show
Spritual Meaning of Salt
1. Salt in the Bible
2. Hebrews & Ancient Israel
3. Covenant of Salt
4. Purification
5. Lot’s Wife
6. Sermon on the Mount
Salt Symbolism in Modern Psychology
The Symbolism of Salt in Dreams
7. Profit
Salt In Language
8. Rub Salt in the Wound
9. Worth Your Salt
10. Salt of the Earth
11. Take With a Grain of Salt
Summary

Perhaps one of the biggest areas to observe salt’s impact on today’s world is through looking at its position in the Christian and Jewish faith. The Bible, in particular, is a prime place to start.

1. Salt in the Bible

There are many references to salt in the Bible; both in the Old and New Testaments. Contexts in which it most commonly appears as metaphor include loyalty, life, value, permanence, purification, and utility. Many of these metaphors stem from its use in ancient life and customs too.

One of the big reasons salt has such deep meaning in the Old Testament is down to the area of the Dead Sea. Recognized as a salt lake bordering modern-day Israel, Jordan and the West Bank, this body of water was the primary source of salt for the people populating this area.

Used by Hebrews in rituals and ceremonial offerings, salt was also used like money. The towering cliffs of Jebel Usdum, also known as Mount Sodom, were the main site of salt extraction. This was thanks mainly due to continued weathering by the elements.

Another common use of salt by Ancient Israelites that bears some semblance to its symbolism of purity today was its use as a disinfectant. Drawing water away from an area of inflammation in order to clear bacteria and other pathogens, it works similarly on wounds as it does on surfaces.

The Hebrew Bible holds two references to the phrase; “covenant of salt”. Technically speaking, a covenant is an agreement. Sometimes legally binding.

In the Biblical-sense however, the term “covenant” is said to refer to an understanding between God and his followers. In the first reference, which occurs in the Book of Numbers, this covenant of salt happens between Aaronic priests (descended from Aaron, brother of Moses) and God. Here salt’s feature of preservation is thought to stand as a symbol for an unbreakable agreement.

The second reference occurs in the Book of Chronicles. Here the same imagery is used, only this time to refer to a relationship between God and the Davidic kings of Israel.

Interestingly, these references are thought to be a direct influence on the Slavic tradition of offering bread and salt as a welcome ceremony to new guests. Something that Game of Thrones author George R.R. Martin also appropriated as a Westerosi cultural practice in his novels A Song of Ice and Fire.

Playing on the symbol of salt as a purifying entity, the Book of Ezekiel makes reference to Hebrews rubbing newborns with salt alongside cleansing water. Considered a customary maternal practice at the time, there are still some modern cultures that do similarly. Some tribes in Turkey, for example, complete this practice with the belief it brings abundance and blessings to a newborn.

The Old Testament also makes reference to salt in its use of “salting the earth” after a battle to consecrate the land to God. This same practice was also reportedly used by the Romans during a siege on Carthage, as well as by the Spanish and Portuguese on lands of people they considered traitors.

Here the act of “salting” is suggested to prevent regrowth or repopulation. Something at direct odds with salt’s metaphor of preservation.

Interestingly, this purification symbol is also evident in the symbolism of ocean, which of course has a great deal of salt in it!

Appearing in the Book of Genesis, Lot’s wife was said to be turned to a pillar of salt by God as he came down to punish the evil deeds of Sodom and Gomorrah.

Now more commonly known as a geographical feature located at the Dead Sea, there’s some disagreement as to the greater significance of the story. Most Jewish scholars agree however that Lot being turned into salt served as chastisement for looking back and yearning for her old way of life.

6. Sermon on the Mount

The New Testament of the Bible, specifically in its passages relating to the Sermon on the Mount, features many passages referring to the duality between salt and light.

Here Jesus was said to have used salt as a symbol of contamination having spread. Particularly in response to people in the world becoming corrupted and having grown far from the light. It’s thought to be a warning by many Christians.

Curiously, a lot of the spiritual meanings of salt appear to have bled over into concepts of modern psychology.

One such analogy bearing resemblance to the Christian ideals of salt and its duality is with the idea of salt representing bad thoughts.

Here salt and water juxtapose each other in a limitless container (said to represent the mind). Water represents pure emotions, feelings, and behaviors. While salt represents the negative ones.

Instead of picking out the salt and ridding ourselves of these negative behaviors, the idea is to work out a different way of adding more water. Thus adding to purity whilst accepting the impossible task of removing all the bad (salt).

This is also quite similar to the French writer Stendahl’s concept of “crystallization”. Inspired by observing crystallizing salt on a trip to some Salzburg mines, Stenhdal used this as a metaphor for human relationships. The idea being that the unattractive (plain salt) can, through a process of mental transformation, become shimmering beauty (crystal).

The Symbolism of Salt in Dreams

Salt plays varying roles in dreams. Held in the hand or seen in its crystallized form, it’s said to symbolize profit, joy, and happiness soon to come in the real world.

Spilled salt, however, doesn’t carry such positive connotations. Here it’s seen to point to problems in the home.

In other dreams, salt can take on different meanings. When seen dissolved in rain, especially when walking through a park or quiet street, it’s said to allude to reconciliation.

While salt added to food serves as a warning of impending illness or stomach problems.

Another area salt carries many associations is in everyday speech itself. The English language has various idioms relating to the word.

8. Rub Salt in the Wound

Rubbing salt in a wound alludes to causing further pain or making a negative situation even worse. When salt is rubbed into an open wound, it can cause excruciating pain.

Someone or something that is worth its salt does its intended purpose well. Some believe this term has its roots in slavery, when slaves were given monetary worth that was compared to common commodities such s salr.

Unlike the aforementioned practice of “salting the earth”, the connotation of this idiom is overwhelmingly positive. People or groups that are said to be the salt of the earth are noble, true, and good.

“Grain” can often be interchanged with “pinched” in this phrase. It means to not believe everything one’s told. Likely because what’s being said is exaggerative or unrepresentative of the actual truth.

The symbolism of salt has almost as many complexities as the use of the mineral itself. From dual meanings used in the sermons of Jesus Christ to differing interpretations based on its form in dreams, this little mineral’s meanings are diverse.