Light has often been a symbol of good in the world. In many cultures, religions, and societies, light is often referenced to be good in what is usually considered an ongoing battle of good vs evil (light vs darkness).

While this is what many people will automatically associate light with, there are other symbolisms of light that many people seek meaning from and can relate to.

In this article, we cover some of these symbolisms of light as it has some powerful and influential meanings.

Light is commonly a symbol of life, both on earth and in the afterlife. People who have had near-death experiences will recount how they had the option to go “towards the light”, which is a symbolic meaning for going towards heaven in the afterlife.

In Christianity, God was said to have first created life but his first step was to create light. Light would act as the basis from which all life would grow and thrive.

Even in non-spiritual teachings, light is said to be the source of life. In scientific theory, the light was brought about as a result of the big bang. This is said to be an expanding source of light responsible for the creation of our universe.

The sun is also essentially a burning ball of light that sustains life on earth. Plants use the sun’s light energy to grow and blossom whilst humans and animals take numerous medical benefits from absorbing light.

Whatever someone’s spiritual or religious beliefs, there tends to be a unified understanding that light is a key source and provider of life.

Light is a symbol of divinity and divine life. In Christianity, God is the creator/giver of light and in multiple religions, angels (the messengers of God) often appear in the form of light.

When light appears during a miracle this is often interpreted to be an act of divine power, usually related to an intervention by God.

Certain deities and gods often have a blurred line between the definition of light or sun, the two are intertwined in terms of divinity and often seen as a symbol of light.

In Egyptian mythology, for example, Ra was the sun god (or god of light) and was considered to be the most powerful of the Egyptian gods.

Light is a symbol of purity and ultimately good. Good is a subjective and very unspecific word, everyone will have their own interpretation of good.

In relation to light though, it is often seen as part of a whole which is light vs darkness and ultimately good vs evil. In ancient Chinese philosophy, Yin and Yang are a representation of this dualism for opposing forces.

Light is also a symbol of purity and openness. When someone hides something, they do so in darkness. Light, however, allows for transparency and openness and these pure souls are often said to emit a certain glow or radiance.

The Jewish use an eight-day festival of light known as Hanukkah and at Christmas, lights are used as part of the celebration for Jesus Christ who was known as the “light of the world”.

All of these celebrations have the underlying meaning of hope, strength, and togetherness that stem from the symbolism of light and the victory that it has over darkness.

Light is symbolic of guidance and the following of a path. In many religious teachings and fables, a lost soul will often follow a path of light for guidance.

Literature often depicts divine light in the form of a glowing orb from which a lost soul can use to find their way. These guiding lights are often thought of as messengers and act on behalf of god.

Lights are also used to illuminate paths in a very physical sense. Street lights, lights on a runway, and lighting in tunnels are placed intentionally to be a guide and show a safe route to follow.

We see through visual light and this helps us to interpret the world around us. Without light, there would only be darkness.

Spiritually, light can be used as a guide for someone that needs to follow a moral or personal path/journey. You’ll often hear about someone “seeing the light” and making a life-changing decision to follow a different path in life.

This is usually a symbol for the people who feel lost in life. They then stumble upon something that they resonate with to turn their life around and reference how they saw “the light’.

Light is often associated with wisdom and the accumulation of knowledge (see also: owls!). Phrases like enlighten, seeing the light, and shining a light on the subject are all metaphors or literal meanings for gaining knowledge in a particular area.

To be enlightened is to gain wisdom on a subject, someone said to have seen the light is often someone who has seen the error of their previous ways or has gained wisdom that will allow them to move forward with purpose and promise.

People who have had negative experiences in life or have followed a wrongful path are often also said to have seen the light when they suddenly turn their life around for the better. Learning from your mistakes and “seeing the light” is a collection of knowledge and wisdom through life’s experiences, both good and bad.

In religious teachings, those that ascend to a higher form in the afterlife are said to have reached the ultimate form of enlightenment. This is a sign of their collected wisdom over the years and in Buddhism, becoming enlightened translates to an awakening (reaching a level of high spiritual knowledge and wisdom).

Light is a sign of hope and promise. This stems from its relationship with darkness, darkness cannot dispel light, however, the faintest glimpse of a light source can illuminate even the most pitch-black areas.

The fact that light can overcome darkness is often portrayed as a way to give hope, this is both a physical and spiritual meaning.

The saying “light at the end of the tunnel” is a symbol for hope and that is used to help people that are struggling in life. As mentioned earlier, angles and other forms of divine light are said to be messages from God to give hope and promise for those that need it.

A famous quote by James Russell Lowell states that:

“Light is the truth”

Something that is said to give light is also said to reveal a truth. To shed light on something is to reveal the truth and this phrase is often used by people looking for an answer to something.

In Plato’s allegory of the cave, light reveals shadows on the wall and is ultimately a symbol of truth. The light outside of the tunnel (from the sun) revealed the rest of the world and also it’s truths. 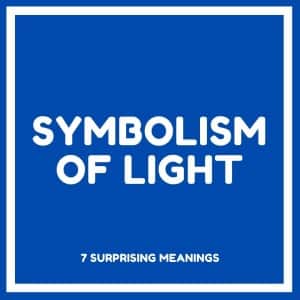 Light is one of the most powerful symbols that we know of. It’s a symbol for life regardless of your religious, spiritual, cultural, or scientific views and is one of the few things in life that the majority of the population can agree on.

It’s often agreed that without light, there would be no life.

Light is also symbolic of wisdom, divinity, hope, good, and truth and these powerful meanings show how central light is to our everyday life and should not go unnoticed.