Interpreting signs from the universe or dream symbolism is very difficult and unscientific. Sometimes, our interpretations can be wrong, and they’re always subjective. 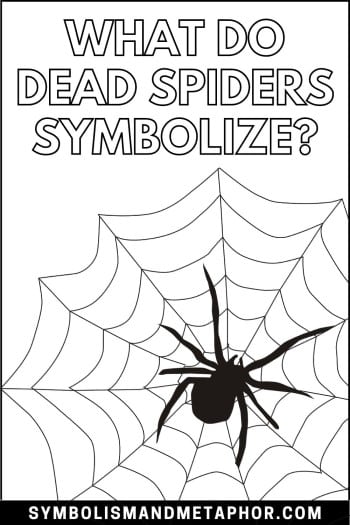 While the below listed spiritual meanings for a dead spider are possibilities, you’ll need to reflect on which one you feel is most resonant with your life right now. That doesn’t mean choosing whichever message you want but finding the one you think you most need to hear from the universe today.

You are turning your back on your creative spirit.

The spider is a creative creature. It weaves intricate webs with beautiful symmetrical designs. But a dead spider may be a sign from the universe that you’ve recently stopped exercising that creative spirit.

I find this to be one of the most common meanings people take away from visions od dead spiders. People who have gotten washed up in life and work often forget to be creative.

They turn around and realize it’s been months since they have used their sowing machine, written in their journal, or painted a picture.

While a dream about a living spider might occur while your creative juices are running high, the dead spider is often a stark reminder that the creativity in your mind is slowly dying off. Take it as a reminder to find some time to rekindle your creative spirit.

You haven’t been using your intelligence to its full effect lately.

Spiders are incredibly intelligent creatures. Whilst powerful, they exercise their power not through brute force but through trickery. They weave webs to try to catch their prey then wrap it up to eat it later.

A dead spider might be a sign that you need to start exercising that intelligent part of your brain. It may be a sign to start considering re-enrolling in a college course, reading the newspaper more regularly, or having intellectual conversations with friends.

Like creativity, our intelligent brains often switch off when we get busy with family and life and work. This is a reminder that you should always keep learning and use that brain, or else your intelligence will start to fade. 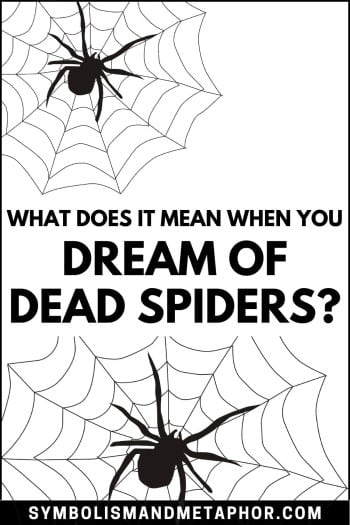 You need more feminine energy in your life.

Spiders are the most feminine of creatures. They’re cunning but gentle, weaving fine and delicate webs that can, nonetheless, be very powerful.

A dead spider may be a sign that you have lost feminine energy in your life. Of course, this means different things to different people.

Feminine spirit comes in many guises, but is often associated with gentleness, warmth, humility, empathy, and nurturing.

For men, the dead spider may be a sign that you have been feeling the need to have time with the women in your life. You may have had the urge for a gentle spirit to come into your home, or simply need time to talk with a sister or mother on the phone.

For women, it may mean that you need to get back in touch with your feminine side. Maybe you’ve not been feeling beautiful of late or haven’t had enough time alone with female friends.

You need to exercise more patience in order to get what you want.

Spiders sit in their webs all day long waiting for their prey. They are very patient animals.

The spider spirit animal brings people patience and calm in their lives. It’s why people who embrace the spider as their spirit animal are often good listeners and caregivers.

A dead spider vision may be a sign that you’re currently lacking patience in your own life. This could be the message for someone who is anxiously awaiting something, or in a rush to reach a major life milestone.

Often, the dead spider is a reminder that you need to pause, take a deep breathe, and exercise some patience. Be more patient and the thing you want may come to you eventually. The impatience you’re feeling right now is not productive for your future self and causing extra anxiety for your present self.

You have something you are afraid of that is occupying your thoughts.

Rightly or wrongly, many of us associate spiders with fear. Their venomous bites make us feel as if they’re an unwelcome presence in our lives.

People who are afraid of spiders will often dream of them. A dream of a dead spider may occur when you’re feeling a lot of fear about something in your own life.

Generally, I only find this rings true for people who are genuinely arachnophobic (having the fear of spiders). People who aren’t clearly afraid of spiders will rarely dream about spiders as a way to bring up latent fears in their minds.

It’s also possible that the dead spider is a sign of a person you might be afraid of. If you’re soon going to meet someone who you consider to be a little scary, the dream may be a way to process that fear while you’re asleep.

There’s something you haven’t seen or have missed in your thought processes lately.

Spiders lurk in the shadows, preferring to be invisible creatures observing their surrounds. This message of ‘invisibility’ may have two interpretations when it comes to seeing a dead spider.

A vision of a dead spider may be a sign that you’ve been ignoring something unseen lately.

Often, I interpret this as the idea that you have overlooked something in your thought processes.

You may have been weighing up an important decision, but missed and important point that’s worth considering on your ‘pros / cons list’.

The dead spider may be a sign that you, too, need to listen to the spirit animal’s message and similarly step out of the spotlight for a while.

This might be the message for someone who’s recently been very vocal on social media, for example. Perhaps the message you’re receiving is to embrace the invisibility of the spider.

Your fate is sealed. The spider has weaved your fate and has now completed its work.

Spiders are said to know people’s fate. They ‘weave the web of fate’.

If you’ve recently had a dream or vision of a spider spinning its web, and this is followed by a vision of a dead spider, the message may be that the web of fate has been completed.

In other words, it’s possible that the window for decision-making has closed, and things will take their course without your input now. This could be the case, for example, if you’ve recently locked-in an important decision.

The dead spider may be a message from your shadow self (your darker side) that it’s dissatisfied or wants to come out.

Spiders are said to reveal our darker side. This is a sinister side of ourselves that we don’t like to reveal publicly.

Sometimes, a dead spider is a sign from that ‘shadow self’ within. It wants to come out and is sending you signs trying to urge you to let it loose.

Your shadow self might be more cunning and guileful than your usual persona. It might have the urge to come out when you’re feeling vindictive or want to use cunning tactics to get what you want out of a negotiation you’re currently engaged in.

As you can see, there are many possible interpretations of the dead spider dream or vision. There’s no easy way to truly see which one is the ‘correct’ vision. Sometimes, you might want to look at other cues or signs in your life to see which interpretations are most resonant with you. But in general, the dead spider meanings include a warning to re-connect with your creativity, intelligence, femininity, and patience. Exercise these personal traits within you before you lose them.