The sun is one of the most common contextual features of a setting that we write about. But it’s hard to come up with creative new ways to talk about something that has been discussed in countless books over Millenia. Below, I’ve compiled some creative sun metaphors that can help you break through that writer’s block and find the perfect setting description in your story.

After exploring metaphors for the sun, I’ll also provide some further adjectives and color descriptions that can help add flair to your writing, and create the perfect image in your reader’s mind.

1. It Slipped through my Fingers

You can picture in your mind sunrays on your hand and, with your fingers outstretched, some of them passing through the gaps in your fingers to lay on the ground below. To say it slipped through your fingers is metaphorical because it didn’t literally slip through anything. It didn’t slide or bounce or refract off your fingers at all. In fact, the it is a long, long way away. Rather, it’s the sunrays that pass between the fingers. But we can be much more creative and visual in our description than to say “the sun rays passed between my fingers” – so we say “it slipped through”.

2. The Blazing Sun Mocked Me

This is an example of personification of the sun. In this metaphor, the sun isn’t a friend but a tormentor. An example of a time when it might mock a protagonist is when they’re out on a hike through the desert. The protagonist is exhausted and dehydrated, with a long way to walk in the heat of the day. Here, we might imagine the protagonist being along and feeling as if the sun is their only company. But the heat means it isn’t a friend but an enemy, mocking you as you try to escape its heat.

Related: A List of Summer Metaphors, Similes and Idioms

3. It Peeked Through the Clouds

We use this metaphor for the moon as well. Imagine the clouds obscuring the sun’s view, but as the clouds part, it seems like it “peeks out” at you to take a look. This is another example of personification. Of course, an object without personality or a brain can’t take a peek at anything. But this personification helps us to create an image in our minds.

This metaphor can be used at the end of a storm to show the end of the storm and the return to better weather.

When I took college classes in creative writing, my professor shared a book he wrote, and it opened with the line: “the sun flipped a golden coin”. I’ve always remembered it and banked this in my mind as a great way to start a story. Others have had their own adaptations of this, such as calling the sun a golden orb or medallion in the sky (See Also: Sky Metaphors).

5. The Sun Chased away the Clouds

Here again we have personification. Of course an inanimate object can’t chase anything or anyone! But what is happening here is the description of the changes in the weather as a battle between different elements. The clouds are being chased like a sheepdog chases sheep, to return to its rightful position as the top dog in the skies.

6. It Stood Watch over its Realm / Looked over You

We can imagine the sun being the ruler over us. It sits so far overhead and is visible from just about anywhere you are (so long as you’re outside). It almost feels like it’s watching us constantly, standing guard. Again, this is of course personification – it doesn’t really do any watching at all! If we were to consider it to be like a god, we can imagine it’s watching us and passing judgement on us all day long.

7. It Smiled Upon Me

This one is another more positive, upbeat metaphor. The idea that you are being smiled at from above gives you a sense that you’re blessed and cared for throughout your day. This might be a metaphor you use if you feel as if you’ve had a lucky day or got some good news today. You can’t imagine using this metaphor when you’re going through hardship or feeling the punishing heat of rays on your skin.

This metaphor calls the sun an egg! It may sound absurd, but if you look at it, it looks like a yolk from the inside of an egg. You might write “the yolk of the sun” as a metaphor to describe it, for example. This is your classic straight-up metaphor where you are directly calling one thing something else.

This is a metaphor you might want to use if you’re writing a story from a religious perspective. To wake to “God’s morning star” is to see God in nature – be it a Christian, Muslim or Buddhist God, or even simply a pantheist. It might be seen as a moment to reflect on God, the beauty of the world, or even a moment for quiet prayer before eating.

The character might be waking feeling blessed, or even, feeling as if they’re downtrodden but continue to sustain their faith in their religion.

The sun is quite literally a star, so this is borderline figurative or literal (also depending on you believe in God!).

10. The Sunrise Greeted me in the Morning

I love this metaphor. I can imagine someone pulling open the curtains and feeling joyful about their day ahead. When the curtains open, the sun is revealed – shining big and bright right back at the protagonist. The sun is a symbol of the person’s mood and greets or “welcomes” you to a day you’re looking forward. Here, it is being personified, which means you’re giving human features to non-human things.

11. The Sun Succumbed to the Moon

This is a description you might use at the end of the day as night falls. Here, we can imagine the sun and moon taking shifts (there’s another metaphor for you!). They swap each 12 hours, almost like they’re in an unending battle. Here, the sun is the loser, succumbing to the moon (or night), to “retreat” through night.

This is a metaphor to explain the coming of the night. Just as we go to bed, we can also imagine that orb in the sky going to sleep for the night. We shape the patterns of our lives around the night and day, so it makes sense for us to project some of our behaviors back onto the sun itself. This, again, is a form of personification where it’s being given the trait of an animal or human – the idea of going to bed!

Read Also: A List of Nature Idioms and Nature Metaphors

Colors to Describe the Sun

Adjectives to Describe the Sun 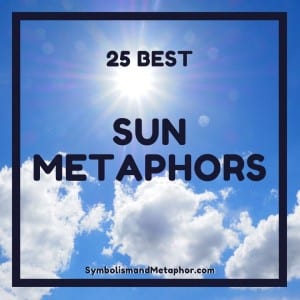 Sun metaphors can help enhance your writing and make it more descriptive. Aim to create an image in your reader’s mind by using adjectives and colors that match the mood you are trying to set. You can use different metaphors or idioms for different times of day or moods of your protagonists.

Other metaphors you can use in your writing to enrich it include happiness metaphors and fear metaphors.