Dead frogs in your path or your dreams can be a sign that you need to be more open to change, your luck may be turning, or you’re wasting your potential. 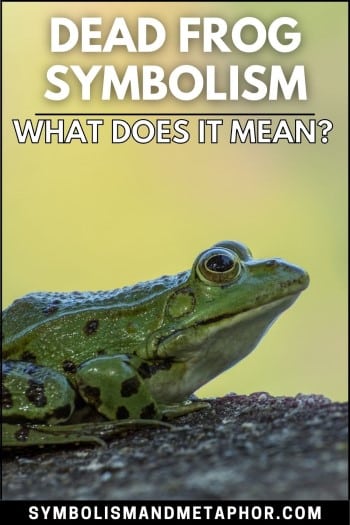 When we look at dead frog symbolism, we’ll often take the deceased animal as a warning that you haven’t listened to the messages of the living animal.

So, common dead frog spiritual meanings could include:

Remember that symbolism is a very subjective thing and has a lot to do with your own personal situation and beliefs. Be open to multiple possibilities and several interpretations, as well as the possibility of misinterpretation. Think about which ones ring true in your life (which doesn’t necessarily mean the message you want to hear).

Often, the universe will send multiple signals, so keep an eye out of other signs around you that may also reinforce the messages you think you’re getting from the dead frog.

Contents show
What do Dead Frogs Symbolize?
1. Be Open to Change
2. You Need to Evolve
3. You Missed your Chance
4. You Recently went through Bad Luck
5. You’re Wasting your Potential
Interpreting Dead Frog Meanings

What do Dead Frogs Symbolize?

1. Be Open to Change

Transformation is one of the most common meanings we can interpret from frog symbols. The frog is a creature which transforms from water-dwelling tadpole to land-dwelling frog. Like the frog, we too need to transform.

Often, I will interpret a living frog as a sign that you’re currently going through a transformation in your life. You might be about to enter a new life phase (new job, new relationship, new home, etc.).

But, with a dead frog, the symbol is a little different.

It may be a sign that you’re not currently open to change. The universe might be telling you that it’s time to keep an open mind and look out for changes on your horizon.

This may be as simple as a change in your style (have you been considering a new hairstyle?) or as complex as changing career paths.

Here, the dead frog can be a reminder from the universe that you need to think carefully about changes. Don’t dismiss them right away, but don’t ‘leap’ right into them either. Simply see this as a sign that you need to be open-minded about all the possibilities that are open to you.

2. You Need to Evolve

As with transformation, evolution is closely tied to the frog symbol. A frog evolves from tadpole to frog. It’s one of the most dramatic evolutions we see in animal life stages.

A dead frog may not have gone through the process of evolution successfully. It has failed and faltered.

Here, the symbol may be that you, too, need to beware of this frog’s mistake. You may be struggling to evolve or hesitant about personal growth.

Evolution in your own life may look like a change in outlook (letting go of career goals and embracing simpler personal goals is a common one).

It may also look like coming around to viewpoints that your younger self was too immature to embrace. Be open to the fact you are gaining more experiences and, with that, evolving into a more mature and well-rounded person.

Your views in your youth will not be the same as your views today. This sign before you today may be telling you that that’s okay. Embrace your own personal evolution. 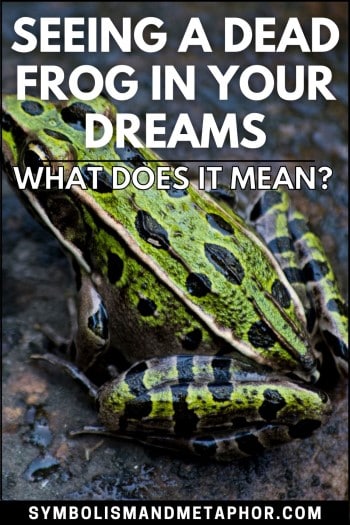 3. You Missed your Chance

The frog is a symbol of ‘taking a leap’ at chances that come before you. People with the frog as their spirit animal are often very keen to take a leap into the unknown.

But, with the dead frog, this may be a sign that you’re not truly embracing the chances that cross your path.

I often find that dead animals can be telling us that we’ve missed a message that the living animal sent. You may have been told by the universe some time ago to take a chance before it’s too late.

Now, this follow-up message is a warning: you missed one chance. Don’t miss the next one.

4. You Recently went through Bad Luck

Frogs are also very commonly interpreted as signs of good luck. A dead frog, on the other hand, may symbolize that you recently had a stroke of bad luck, or that your luck is changing.

If the living frog is a sign of good luck, then the dead frog may be a sign that you’ve recently been unlucky. Fortunately, this is often simply a sign that you shouldn’t be too disheartened: something bad that recently happened to you was just bad luck and not a reflection of you or how your life is going.

Frogs are signs of potential (relating, again, to their ability to transform so spectacularly). So, dead frogs may be warnings to us that we’re not living up to our full potential.

We commonly get signs like this when we are in a rut in our lives. We might be being lazy and choosing not to work as hard as we should, or we might be constantly looked over for a promotion. Or, we might be living an unintentional life without goals or direction.

The dead frog may be a sign from the universe that we’re not acting like the frog. We’re not going out there and living up to our god given talents. If this is a sign for you, it may be a reminder to get up each day and seek ways to live up to our potential.

Don’t forget that these meanings are entirely subjective and different for each person. Think about which symbols ring true in your life and how these signs can help you think about redoubling your efforts for self-improvement. Our job is to reflect on these symbols and how they might help us work through problems in our lives.

But, at the same time, we need to remember that subtle signs are really hard to interpret.

We can’t read anything too much into them because we may be misinterpreting these hints, so always keep an open mind, and take this as an opportunity to simply think about our lives and how we can achieve self-improvement.

Dead frogs symbolize multiple things, but a common thread is to pause and reflect on the things we’re missing. It’s a reminder that you’re overlooking something: maybe you haven’t been open-minded, embracing change, or living up to your potential.

Fortunately, the meaning of dead frogs is not that you have failed, but that you still have a chance. As with the ‘bad luck’ sign listed above, you may have faltered, but you shouldn’t see it as a reflection of your future. The sign is often sent to you as a reminder that you can have a better future if you change your mindset and work hard to achieve what you want.

1 thought on “Dead Frog Meaning & Symbolism (A Time for Change!)”