Some common loneliness symbols include:

Below, I’ll explore each of these symbols with examples and explanations.

As a writer, you can employ many of these symbols as motifs in your literature. In the right context, each could effectively evoke powerful emotions in your readers.

Lighthouses stand on rocks and cliff edges in some of the most remote locations on our coastlines. They are monuments on otherwise bare and baron islands.

You could also imagine the life of a lighthouse keeper who tends to the light and daily chores without seeing any colleagues or friends. Those who maintain lighthouses on remote islands in the ocean might even go months without seeing anyone, and those who they do eventually see will pass by to drop off supplies then go on their way.

Hence, a wide-shot image of a lighthouse in a rainy night might evoke a sense that the lighthouse (and its keeper) are some of the loneliest things on earth.

There is just one moon. It sits alone in the night sky as the only thing of its kind.

It also seems so far away from us. The separation between ourselves and the moon gives this profound sense of distance – even loneliness – because we can look at one another but never truly connect.

In parts of the world, you can hear wolves howling at night. We often even say that they’re “howling at the moon”.

One interpretation of the howling of the wolf is that they’re howling out for company or friendship. But they get no reply, making their howling a futile expression of loneliness that dissipates into the unsympathetic night.

The metaphorical saying “howling at the moon” even refers to the concept of a person complaining endlessly about something that no one cares about (or, that nothing can be done about).

Shepherds spend their days out in the mountains tending to their sheep. They ensure the sheep are safe and protected.

But they do this work all on their own. They’re lonesome meanderers living on the outskirts of society. They don’t see other people while out doing their work in the fields and hillsides.

This was a common motif in early Christianity. In those times, shepherds were known to be lonesome characters. But, they also used their time alone in nature to connect with God, say their prayers, and reflect on their closeness to King David who himself was a shepherd. As Father Alfred McBride states, a shepherd often “turned his loneliness into a meditative solitude”.

Next time you see a scene depicting loneliness in a film, take note of the lighting effects used. More often than not, the scene of loneliness is set in the darkness.

This darkness might take the form of an empty dive-bar with flickering dim lighting. Or, it might be someone walking the streets at night like in the film Midnight in Paris.

One reason for this is that darkness symbolizes sadness – an emotion also often felt by people who are lonely.

Silence is a powerful way to depict loneliness in films. A scene of prolonged silence with a character sitting there looking out the window, for example, can be a very powerful indicator of their sense of isolation.

To further reinforce loneliness, you might see filmmakers contrasting a busy, noisy scene (perhaps in a nightclub) to a quiet scene of the lonely protagonist in their bedroom.

Another time you often see silence representing loneliness is when there is imagery of an elderly person living their life after their husband or wife has died. For them, life feels incredibly quiet since the passing of their loved one.

Of course, silence has such a powerful effect in creating a sense of loneliness because when you’re alone there is no one there to talk to you.

A lonesome ship out at sea (with no land in sight) is a powerful image. It strikes fear in the hearts of most of us!

The severe dislocation from civilization, the sense of lack of control, and the emotional burden of knowing you’ll die a slow death of starvation, is enough to evoke some strong sense of loneliness.

And this image – of a ship, often damaged by a storm – is a repeated motif in storylines about loneliness, perseverance, and mental fortitude.

A small sample of films with this sort of storyline include:

Like a ship lost at sea, the idea of a person stranded on an island can invoke a strong sense of loneliness.

Perhaps the most famous example of this (in film) is the movie Castaway in which Tom Hanks finds himself stranded alone on an island. The scenes of him staring out at sea, screaming out for help, and scouring the island for signs of life are compelling images of loneliness.

Tom Hanks’s loneliness leads him to draw eyes on his beach ball an naming it “Wilson” so he has a friend to talk to.

Motifs of lonely people walking the suburbs often contain an image of them siting on a swing. They will sit there and slowly swing back-and-forth pondering life and looking over the bustling city or suburbs beyond.

The lonely person on the swing is strongly contrasted to the busy city beyond.

But perhaps even more lonely is the sill, creepy image of a playground with no children playing. Here, the swing (perhaps swaying gently in the wind) is a reminder of absence of people – it’s strange and awkward to see a playground without laughter and the happiness of children. 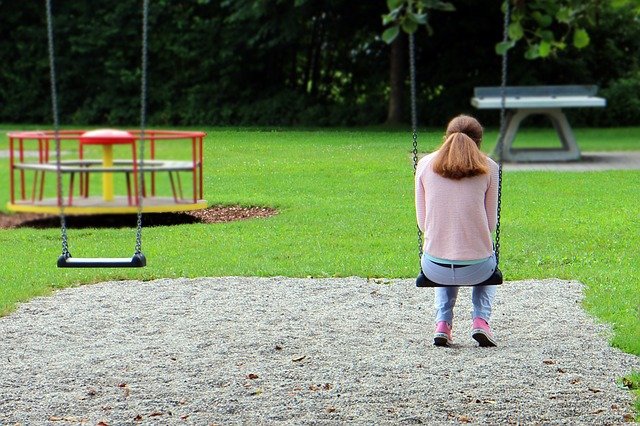 Often, a person is said to be “under a cloud” if they’re feeling depressed or lonely. A cartoon of a person walking alone with a cloud following them around can symbolize this sense that they’re all alone and lonely which is getting them sad.

Another common loneliness motif in films and literature is rain. The falling rain helps to mirror the protagonist’s mood: they’re miserable, feeling lost, and don’t see any happiness around them.

As a weather symbol, rain traps you inside and makes you feel like you can’t go out and do things that make you happy (like spending time with friends). It also reflects moods associated with loneliness like sadness, depression and melancholy.

You may notice during a break-up between protagonists or the death of a close confidante, the writer uses rain as a way to signal to the viewer (or reader) the new dominant mood in the storyline.

12. Looking out a Window

This one is often paired with the symbol above. You can imagine a person sitting inside looking out a window. Rain might be pattering and rolling down the glass pane.

Here, the person sitting inside feels lonely because they’re trapped in their home with nowhere to go and nobody to be with. The home is a trap, and the outdoors (which they are looking out at) is the happiness they seek.

But the rain – symbolizing sadness – is keeping the person trapped in their loneliness. 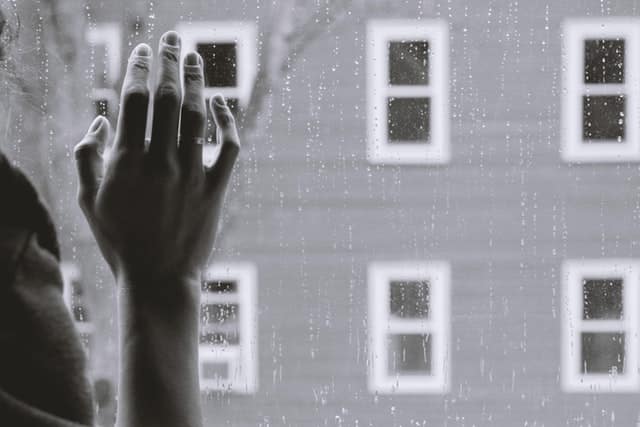 An empty room is a simple yet effective way to symbolize loneliness. The less furniture in the room the more the loneliness seems to encroach into this sort of image. Removing people and furniture from the room also removes the sense of comfort and homeliness.

What you get is an empty shell of a room that seems to be missing something. It’s missing laughter, people, memories and happiness – just like someone who is lonely.

One of my favorite films is Toy Story. In this film, there are often scenes of toys being left abandoned by their owner, Andy. In these situations, there’s a clear sense of loneliness (and sadness) felt by the abandoned toys.

The idea behind the link between abandoned toys and loneliness is that you get this sense of melancholy: there was happiness in the past when this toy was played with and loved. But the happiness is gone because the toy is gone. Now, the toy is feeling all alone. 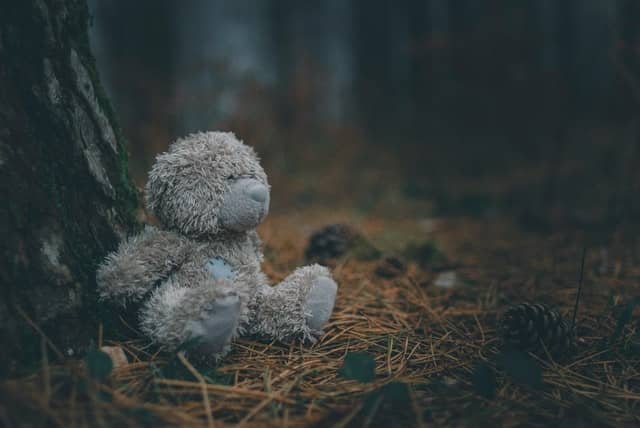 Tumbleweed tends to blow through abandoned towns and deserts.

Historically, Western films have used tumbleweed as a symbol in scenes of silence, emptiness and abandonment. The tumbleweed blows through when the town has cleared-out, or when a character sits alone on the side of the street waiting for someone to come and collect them.

In these situations, tumbleweed can symbolize many things: abandonment, emptiness, the Frontier, and (of course) loneliness.

Someone who is forever travelling is often a lonesome figure. They’re never in the one spot long enough to make deep and meaningful relationships. As soon as they’ve arrived, they’re gone again.

You can picture this traveler with their backpack on, shuffling from one hostel to another. They’re possibly a silent person, sitting at the edge of a bar having a beer in silence, watching the festivities but never participating in them personally.

You may have seen in movies a the lonely, sad and depressed character sitting on a bar stool in a run-down empty bar.

He usually sits there downing his glass of whiskey.

Like the traveller above, he keeps his head down and doesn’t make eye contact with anyone else.

Another place where a glass of whiskey is often a substitute for loneliness is in country music songs. Chris Stapleton’s song Tennessee Whiskey, for example, opens with:

Here, the protagonist is drinking whiskey out of sadness that he is alone and hasn’t got anyone to love.

The symbolism of mountains is mostly positive. They represent escape, freedom and adventure. When we’re out in the mountains we can breathe fresh air and forget about the worries of civilization.

But they can also represent hardship and distance. It’s hard to climb a mountain, so we can invoke them when talking about the difficulties experienced in a journey. We can also use them rhetorically to highlight the distance between you and someone on the other side of the mountain.