Some common symbolic meanings of axes:

Throughout history, the axe has been a tool of pagan gods, Viking raiders, pioneers, and lumberjacks. Each of these historical groups have contributed to our cultural understandings of what the axe symbolizes.

Below, I’ll explore each of these symbols with examples and explanations. 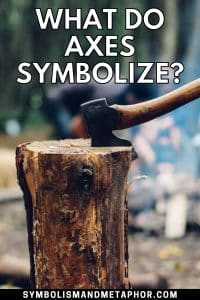 Axe bearers have been mythologized as alpha males throughout history.

Some of the earliest axe men – the Vikings – are remembered as burly warriors who went out to pillage the Germanic and Celtic lands of Northern Europe.

And still today lumberjacks are seen as the most masculine of characters. Pictured with full beards and flannel jackets, they’re seen to be characters who wander out into the woods to tackle the harshest elements of nature.

One notable exception is the Labrys, a double-sided axe of ancient Crete. This axe was only wielded by goddesses, and never male gods – why? I do not know!

An axe is a heavy tool that can only be used by the burliest of men. So, it follows that they are signs of strength.

But the power they wield has multiple facets.

One is the fact that – with an axe – you can literally “wield” your power with your hands. The axe can help you exert power over others. Soldiers have used them in battle throughout history.

The other expression of power that the axe symbolizes is the power you can yield over nature, which is discussed next.

Read Also: The Symbolism of Iron

Throughout history mankind has had a burning desire to conquest nature. The axe has, for most of history, been the tool to achieve this goal.

Axes bring down entire forests and turn them into structured and orderly cities. Trees are lobbed, only to be re-planted in lines called “fences”. It would sound bizarre to aliens that we kill trees only to re-plant them!

But the imposition of structure over nature gives us a sense of control over our environments. We develop a sense of ownership and mastery over the lands we claim as our own.

Axes in mythology are also often wielded by Gods who control nature:

4. Pioneering and Expansion of Civilization

Axes were also the tool of the pioneers. When they arrive in a new land, they get to work instantly logging trees to build shelters and walls to protect them from the elements.

There is an old German tradition where you throw an axe and where it lands, you break ground and build your new establishment. Legend has it that St. Wolfgang initiated this tradition: he found a spot in the forest, threw the axe, then built his home above where the axe landed.

Here, the axe offers protection from the elements.

But the pioneers also have them as weapons to expand their territory. Think of the Vikings with their Battle Axes. They would land on the coastlines of Britain and Ireland to pillage, set up villages, and defend their new territory.

Without the axe, civilization was unable to push the boundaries into new lands.

The axe is a tool of both destruction and creation.

As a destructive tool, it has had devastating effect. It’s destroyed countless hectares of forests over the years – indeed, nearly all the forests across the entire country of England. Across Germany and central Europe, people for centuries cut down huge swathes of trees.

And today, the environmental destruction caused by the axe (and, now, machinery) continues across the world.

Axes can also tear down buildings of enemies. And of course, they are tools of murder. The axe is a symbol of the destructive nature of humankind.

Despite its symbolism of destruction, the axe also symbolizes creation.

Without the axe, we wouldn’t have been able to develop civilization as we know it today. It was a tool used to establish and build our great societies.

With axes, we have built enormous empires and cities. We’ve used axes to get the fuel for our fires and warm our homes. They have been central to increasing the productivity of our society.

The double-sided axe symbolizes balance. It is often perfectly symmetrical and reinforces the symbolic idea that the axe has two faces: one of destruction and another of creation.

This symbolism is often invoked in logos and crests that contain an axe. The axe can symbolize balance within a family or city: on one side is the wife and the other the man, and with each we achieve balance.

Today, it’s also incredibly important for throwing axes to be balanced because it helps with aim and accuracy. It’s quite an industry to develop balanced axes that will help you to become a skilled axeman during battle and, today, contests.

Axes have historically been used to dole out the ultimate justice: beheadings. With the axe, judgement is passed and justice delivered.

However, the axe-wielding executioner is also known to wear a mask or balaclava to protect their identity. While executing justice, they also want to hide themselves because they’re afraid of retribution.

So, sometimes, the so-called justice the axe symbolizes can end up being injustice if the axe-wielder’s authority is questioned or considered illegitimate.

Communities of people who wield axes are often seen as fiercely independent people.

Both these groups were outlaws and lived on the outskirts of their societies. They wielded their axes as a way to protect their own fierce independence.

As some of the basic tools of civilization, axes have been fundamental to the growth of humankind. Axes have been central to the good (building new cities, clearing land for agriculture) as well as the bad (war and execution).

So, axes symbolize opposites and juxtapositions: destruction and creation, war and justice, defense and attack.

Axes have been wielded by central figures in our mythology:

Today, we often also see axes in mythological texts. They’re wielded by trolls and dwarves – short, stocky masculine creatures who hark back to that raw masculinity that has always attached itself to the symbol of the axe.