That’s tough, so let’s break it down:

Here are some examples.

The metaphor “she is an early bird” compares the lady to a bird but phrases it as if they are literally the same. The bird in the metaphor always wakes up early in the morning. So, we can logically deduce that this metaphor is highlighting that the woman wakes up early, too.

The idiom “it’s raining cats and dogs” means that the rain outside is very heavy. There is no clear logical connection we can make between cats and dogs falling from the sky and heavy rain.

Idioms are regularly (but not always) impossible to understand without being told their original meaning. To understand an idiom, you often need to have the knowledge of the phrase passed on to you by someone who knows. Idioms live on through unbroken chains of language transmission.

Metaphors, however, can have their meaning deduced directly from the phrase because there is a clear overlapping feature between the two things being compared in the sentence.

Contents show
Idioms vs Metaphors
1. What is an Idiom?
2. What is a Metaphor?
Key Differences Between Idioms and Metaphors
Conclusion

An idiom is a type of figurative language that exists within a cultural or language group. It is a way of saying things that members of the language group will understand because they have had the meaning passed down to them over time or they understand the term as a cultural reference.

The meaning behind an idiom is often obscure, tenuous, or entirely lost. The original purpose or connection between the figurative phrase and its literal meaning is not always clear.

You can, however, sometimes deduce the origins of the idiom if you have enough knowledge of history or context within a culture.

For example, the popular idiom “to burn the midnight oil” may be hard to understand for people in the 21st Century. Nevertheless, someone with historical knowledge of life before electricity, they may know that light at midnight required burning oil in a lantern, and therefore can decode the idiom without help.

In this instance, the idiom’s original can be deduced with enough contextual knowledge. But, it is not a metaphor because there isn’t an implied comparison involved in this phrase.

Some common idioms in the English language are listed below:

Notice that two things aren’t necessarily being compared here. For example “cloud nine” means to be euphorically happy, but clouds themselves aren’t happy, so it’s hard to deduce meaning without cultural knowledge.

Read Also: The 7 Types of Idioms

A metaphor is a figure of speech that involves comparing one thing with another thing. However, unlike a simile, a metaphor doesn’t say Thing A is like Thing B, but rather Thing A is Thing B. This is done to achieve literary effect and help paint a picture in the receiver’s mind.

So, the comparison is implied rather than spelled out for the reader.

You might hear that metaphors don’t involve comparison. This is not true. Metaphors rely upon comparison between two things to obtain their meaning and effect. However, the comparison is written as if it is literal.

If the comparison is literally written using comparative phrases including: such as, like, as good as, as tall as, etc, then the phrase is called a simile.

Examples of common metaphors include: 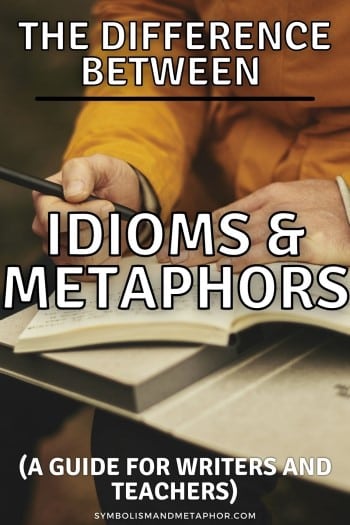 Key Differences Between Idioms and Metaphors

There are some key similarities (such as the fact they both employ figurative language). But there are more differences than similarities. Below are some of the key differences.

Idioms can be metaphors. Metaphors can be idioms. But not all idioms are metaphors. And not all metaphors are idioms.

So, it gets complicated.

Some good key rules to remember are:

Another way I like to compare the two is by saying anyone can make up their own metaphor by creating an analogy between two similar things. You can’t make up your own idiom because idioms emerge through cultures over a long period of time. An idiom exists only within our shared cultural knowledge.