We have developed metaphors and idioms around most emotions in our language. We have metaphors for happiness like “happiness is contagious” and metaphors for fear like “fear is eating me up”. Many of these metaphors feature personification – giving a non-human thing human traits.

So, in this review, we’ll look at some fear metaphors and idioms.

Contents show
List of Fear Metaphors, Idioms and Sayings
1. Fear Drove you to Action
2. Frozen with Fear
3. Fear Controls You
4. Fear is Eating you Up
5. The Fear Sunk In
6. Scared to Death
7. Scared my Socks Off
Conclusion

1. Fear Drove you to Action

Of course, fear itself doesn’t have the brain or intention to compel people to do anything. But, fear is an emotion that can influence our behaviors. So, the idea of fear ‘driving’ us has become a common idiom in our language.

Here again, we see fear acting upon us. In this idiom, we say that fear “freezes” us. Of course, we don’t really freeze like a block of ice. But we’ve come to use the idea of fear ‘freezing’ people as a way of saying it made us stand as still as if we were frozen. This might be the case, for example, if we think we heard a bear outside our tent when we’re camping. In that case, I often feel like I need to sit as still as humanly possible because I’m scared the bear will hear me and attack!

The idea of fear having control over our lives is a fearful though in itself! But, sometimes when we’re so afraid to do something, it feels like fear is the motivating factor behind our actions.

I was on the fence about whether this idiom could be considered a metaphor. Does fear literally control our minds? Or, are we somehow personifying fear here and giving it traits that in reality it doesn’t have? Fear can’t do things to us, can it? Or can it literally control us?

4. Fear is Eating you Up

Fear ‘consuming’ you is one that I think is a little more figurative than literal. Something ‘consuming’ you us usually seen as a literal – something is eaten or drunk until it no longer exists. When we say fear is eating someone up, we mean that they are thinking about their fear day and night. They might also be letting the fear direct their actions. But, is the fear “eating them up”? No, not literally.

When we say that fear ‘sunk in’, we’re saying that someone for the first time really felt its full force. Someone might be feeling a little afraid of something for a while, but when they realize the seriousness of what they’re afraid of, we’ll sat it “finally sunk in”.

Of course, fear isn’t “sinking” in any literal sense. But when something “sinks in” (such as into a sponge), it stops hovering on the surface and is absorbed right into the sponge. Similarly, we might imagine the fear stops being a peripheral concept and becomes a central concern in our minds.

This is a saying I’ve used a lot in my life. Of course, I’ve never actually been so scared that I died. And as far as I know the only thing I’ve ever seen be scared to death is a guinea pig – it had a heart attack, the poor thing!

But many people say they were scared to death as a form of hyperbole. It’s a way of saying you were so scared by something (usually something that happened suddenly) that you could feel it in your heart. Maybe it started beating extremely fast – so fast it hurt!

7. Scared my Socks Off

To have your socks scared off is another saying that expresses that you were extremely scared. We can also say something exciting knocked our socks off.

It sounds like a bizarre saying. How on earth could you be so scared that your socks just fell off? But, that’s the definition of an idiom – you can’t reduce it to its literal meaning or original context (if there was one). It’s just a saying we say … and we all seem to understand it and not think it’s strange at all! 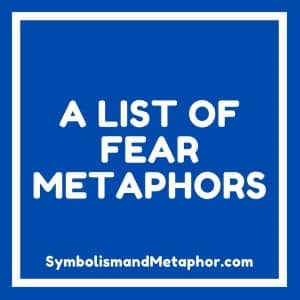 This is by no means an exhaustive list of fear metaphors, idioms and sayings. But, these seven are a good start for looking at how we have developed sayings to explore the concept of fear. Being afraid or scared is often something we find hard to discuss, so these phrases are good ways for us to develop a common language we can use to explain our emotions.

We have developed sayings, idioms and metaphors for many other emotions in our language to help us communicate and express ourselves. Consider checking out some happiness or anger metaphors for further details.